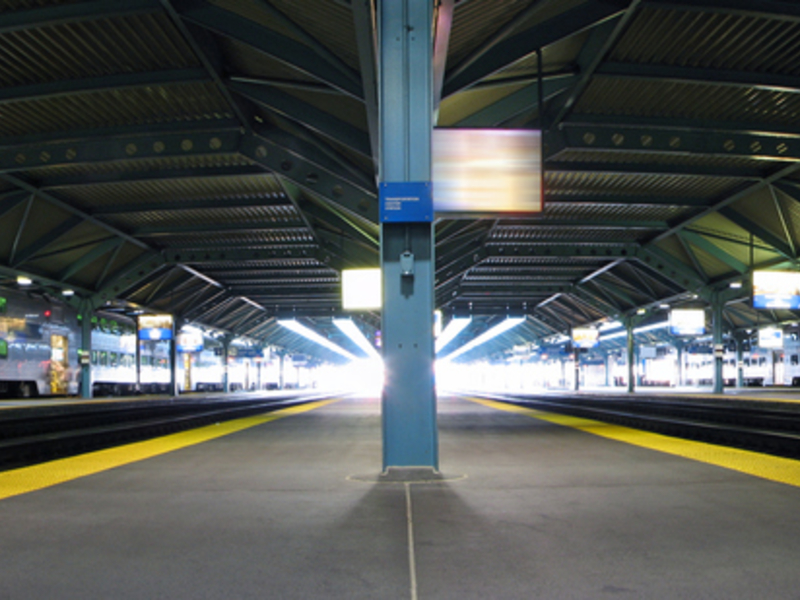 Reinvented according to this model—called regional express rail (RER)—Metra’s key hubs would be O’Hare Airport, the Loop, and McCormick Place, and it would offer frequent departures throughout the day, with frequent express trains running between the hubs.

Planning for a regional high-speed rail network could be a powerful driver of Metra’s transformation—and vice versa. Silicon Valley’s commuter-rail system, Caltrain, is a great example. It’s in the midst of upgrades that will turn it into the gold standard for RER systems in North America. Electrified trains will run at up to 110 mph, and there will be departures every 15 minutes during peak hours.

These investments are made possible in part by funds earmarked for California’s San Francisco to L.A. high-speed line, which is currently under construction. The two systems will share the same tracks, and the upgrades are taking place as part of California’s big-picture plan for its transportation system. That plan—which has a time horizon of 2040—allows the state to create synergies between Caltrain and high-speed rail.

And there are plenty of opportunities to look abroad and learn from global best practices. Germany’s rail network, for example, integrates citywide (U-Bahn), regional (S-Bahn) and intercity high-speed rail. The same kind of synergies could reinvent Chicago’s transportation system and reinvigorate the Midwest.

Building on a strong foundation

The Illinois High Speed Rail Commission—building on the framework created by the  recently released Midwest Regional Rail Plan—could be the vehicle for the kind of big-picture planning that we need.

The great news here is that Metra has four routes that are ready for RER conversion. Upgrading these tracks to make them usable for RER and high-speed trains will require significant investments. But the right-of-way challenges—which are among the most daunting obstacles in developing a regional HSR system—are largely solved.

Upgrading and focusing on these four routes would yield the biggest returns and have the highest near-term impact:

The path to getting to where we need to be is challenging but doable, especially since Metra’s leadership has shown a willingness to invest in improving the system. Metra recently increased the frequency of service on its UP-North and Metra Electric lines, for example. It’s also seeking to add service to O’Hare—a move that harmonizes well with the ongoing expansion of the airport’s capacity. With rail connections incorporated into its design, O’Hare could be a transit hub for more than just air travel.

That’s the first step. A second step is to identify the existing assets that make the integration of Metra with a high-speed rail network possible. Identifying these assets—stations, rights-of-way, private institutions, state agencies, and much more—will make it clear just how ripe and ready Chicago is for RER and for high-speed trains. More than any city and region in the U.S., Chicago and the Midwest have the infrastructure and the capital to make this happen in a short timespan—if we leverage our assets well.  Knowing what those assets are will be critical.

Finally, we need champions to step up and help get this done. There is abundant grassroots support for better train service in the U.S. But it isn’t enough to have good ideas and popular support. That’s the hard reality of our politics. Cutting through the noise and the inertia requires champions who grasp the vision, believe in it, and have the ear of high-level decision makers and influencers.  RER and high-speed trains make the case for themselves—once their case actually gets a hearing. Examples all over the world prove it.

With the population stagnating or declining across much of this region, some of our marquee companies leaving, and transportation accounting for more greenhouse-gas emissions than any other sector, our future is on the line. A reinvented Metra, integrated with a regional high-speed rail network, would be a paradigm-shifting solution and a model for cities and regions nationwide.

Congress has just passed a once-in-a generation infrastructure bill with the funding to make it happen. And the new High Speed Rail Commission in Illinois could chart the path for integrating Metra with HSR. What’s needed most urgently—right now—are champions who will put their shoulder to the wheel and get things moving in the right direction.

President Joe Biden speaks as he announces that he is nominating Jerome Powell for a second four-year term as Federal Reserve chair, during an event in the South Court Auditorium on the White House … END_OF_DOCUMENT_TOKEN_TO_BE_REPLACED

Research has shown that women are most likely to shop for milk substitutes, and so the all-women Planting Hope, which counted food industry financier Larry Levy and other men as early investors, is no … END_OF_DOCUMENT_TOKEN_TO_BE_REPLACED