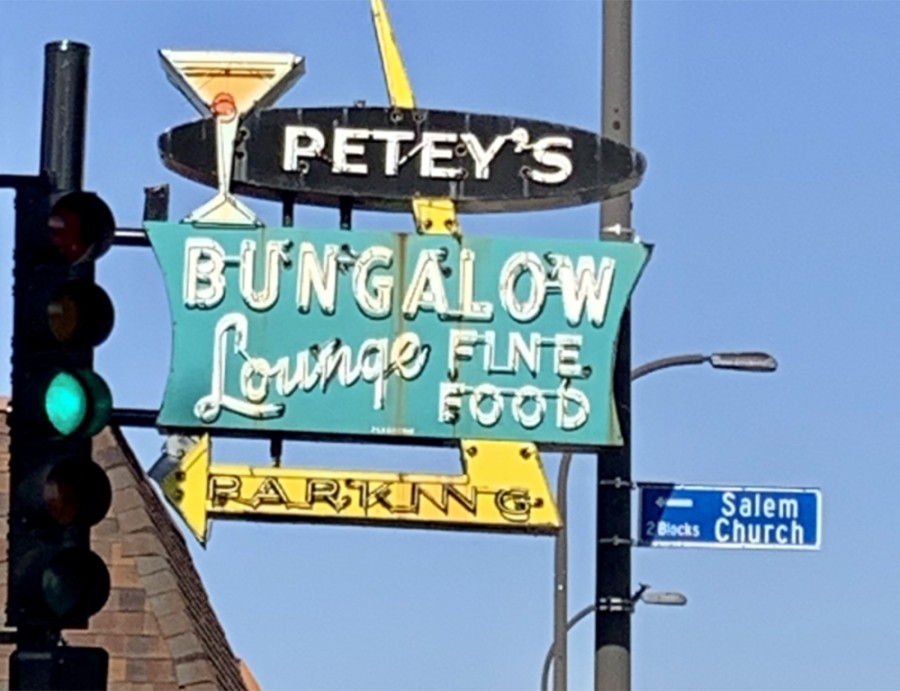 Lots of Chicago-area buildings make you stop and ask: “What’s that building?” WBEZ’s Reset is collecting the stories behind them! You can also find them on this map.

In the middle decades of the 20th century, America was swaggering with industrial might and a recent World War II victory — and Chicago was booming as a center of the nation’s industry and transportation. So, it’s no surprise that the architecture of the era was often self-assured or even brash, breaking with traditions and trying out new ideas.

But there’s another way to explore mid-century architecture: on a bike ride through one of the Chicago suburbs that was growing fast in the 1950s.

About the trip 🚴‍♂️

This bike ride is under 5 miles round-trip, mostly on side streets. It’s arranged so the excitement builds: Each stop along the way is a little better than the last. You’re sure to notice other fun buildings on your journey.

We’ll start along 95th Street, from Kildare to S. Kenton avenues. If you’re coming by car, there are a lot of places to park and unload your bike.

On this tour, along your route you’ll see an array of mid-century buildings, from flat-topped apartments with panels of breeze block, to curved bay windows, to the pointed roof of a dramatic church. Let’s go to Oak Lawn, where even modest and middle-class homes showed off the bravado of the era.

A stunning display of three materials on one apartment building’s main wall: boulders, bricks and breeze blocks — a popular mid-century decorative building material that is, essentially, a concrete block with a design cut out of it — all capped by a sloping chalet-style roof.

Next: Go one door east.

Quickly admire the stylish, mid-century sign over Petey’s Bungalow Restaurant & Lounge, neon martini glass and all. There’s been a restaurant here since 1949, and it’s been Petey’s since 1961. 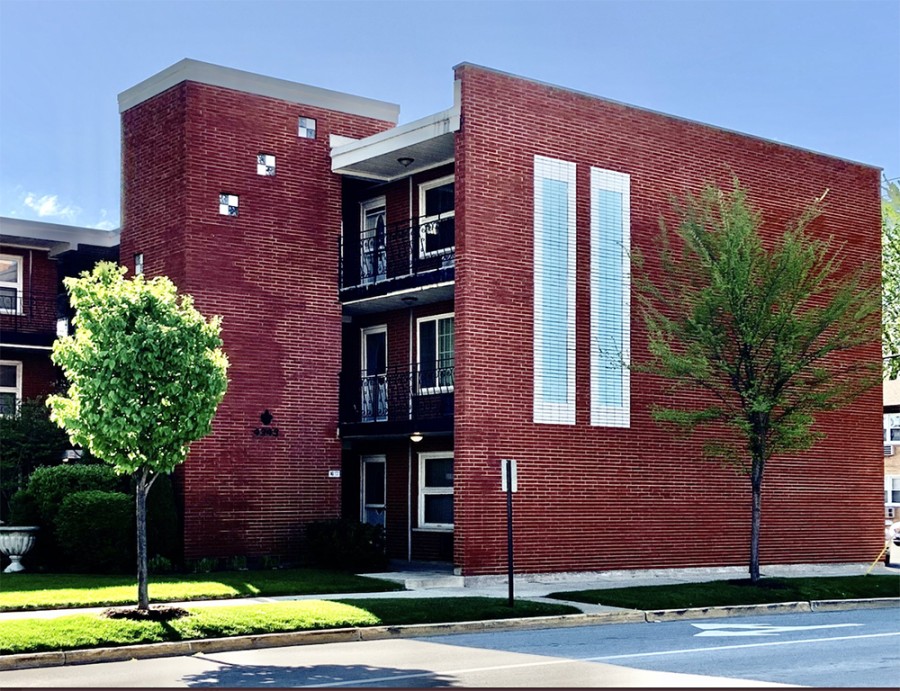 Admire the colors of this red brick apartment building, jazzed up with panels of blue and white brick.

Next: You’re now heading back west several blocks. There are two possible routes. The most direct way is to bike along 95th street.

However, if you want to avoid heavy street traffic, you can go through side streets. Take S. Kostner Avenue to 96th Street and turn right. Bike to Kenton Street and turn left. Turn right on 97th Place. Cross Cicero Avenue carefully and, on your right, get on 97th Street. Go left at 49th Avenue. Go left on 96th Street to 50th Court. 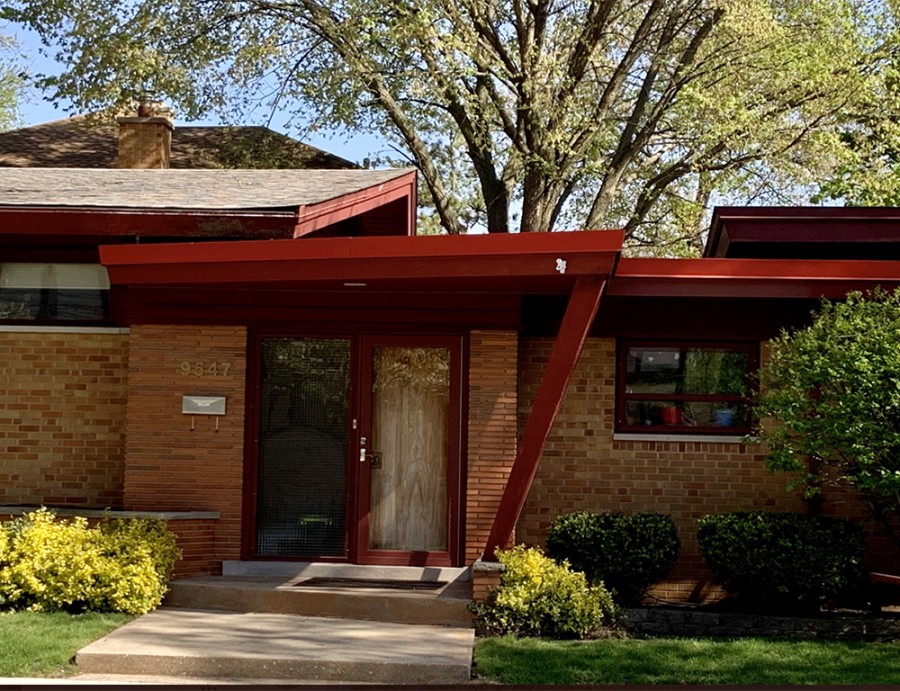 This is a mid-century classic, with small, high windows on the street sides for privacy. The roofline can only be called “assorted,” with some sections peaked and some flat. One of my favorite features is the angled posts that support the canopy above the front door. They’re angled just because they can, a typical era flourish, but they also echo the “7” in the house’s address. 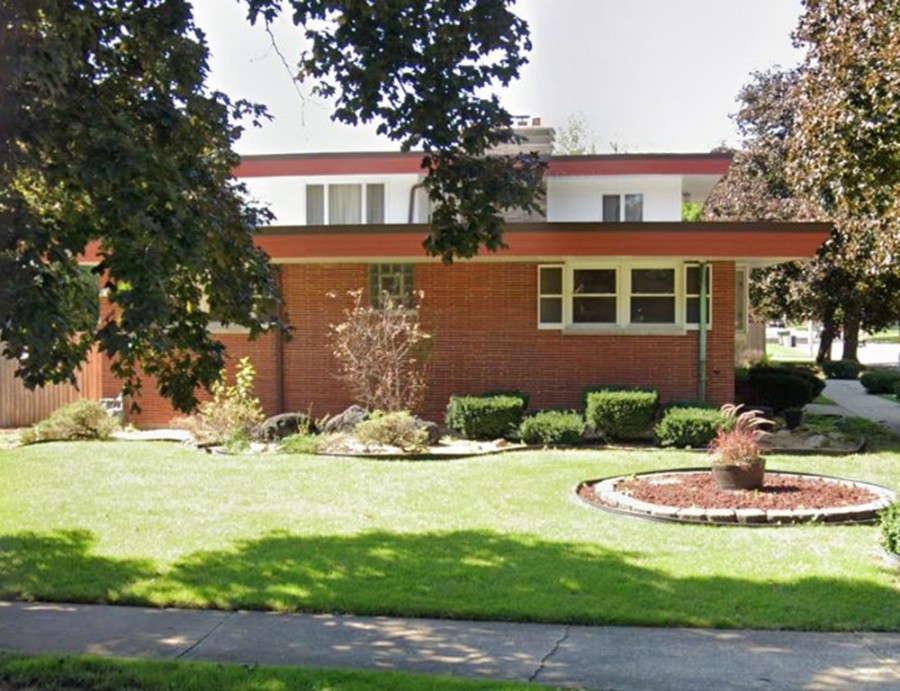 Built in 1954, a flat-roofed beauty commands this corner where you turn right, with a grid of windows and elongated roof overhangs.

Next: Turn left on 98th Place. Just before you hit Cicero, the street is flanked by two examples from the era: On your left is a red brick commercial building with vertical strips of glass and formed plastic — stripes that would look just as good on a bowling shirt. On your right is the textured brick wall of an apartment building that shows how even age-old brick was used in sculptural ways in those decades.

Turn right on Cicero. You’re only going to be on this busy street for about four blocks. There’s a protected lane on the west side, but it will make your next turn, crossing Cicero to go east, difficult. 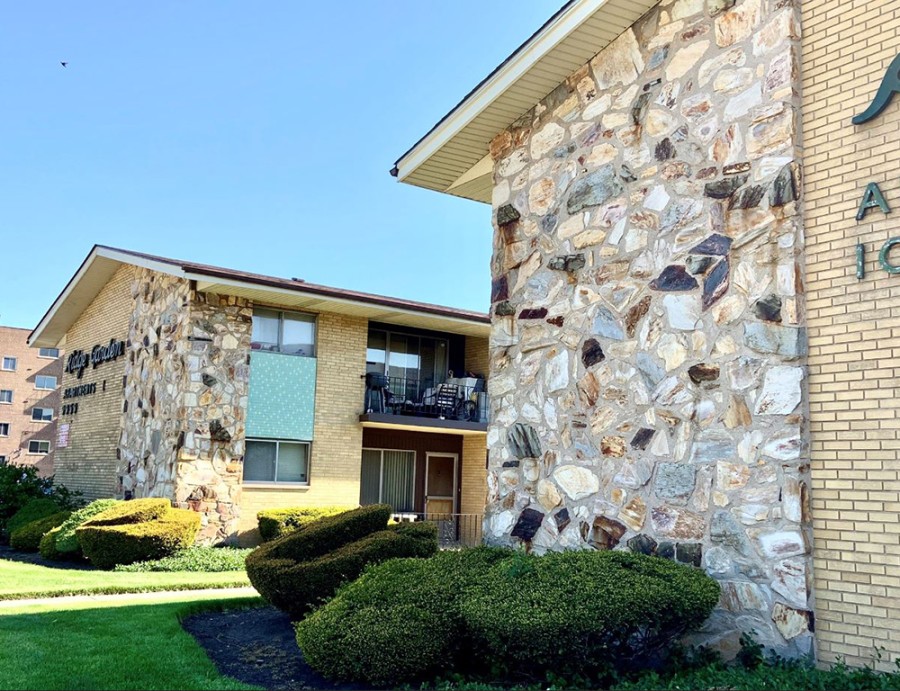 The Ridge Garden Apartments have exterior walls with rough field boulders, complemented in the courtyards by smooth panels of sky blue tile.

Next: Turn left on 101st Street and go less than half a block. The apartment building’s walls are faced in blue boulders, looking like they came out of a turquoise mine. This sort of finish came to seem kitschy in the decades after it was built, but to me, it created visual interest inexpensively.

Next: Continue east on 101st Street, past 1950s versions of the Chicago bungalow: flat-fronted, often with concrete ribs and details. Turn right on Kenton Avenue. 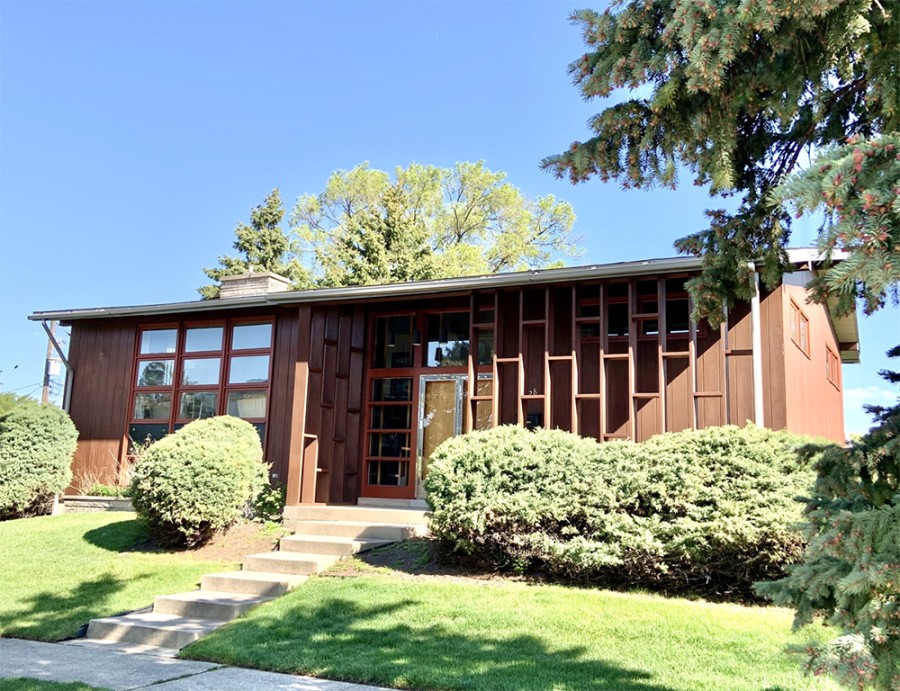 Built in 1965, the house faces 102nd Street with a charming two-story wood screen and a grid of windows.

Next: Go back up to 101st Street and continue east. 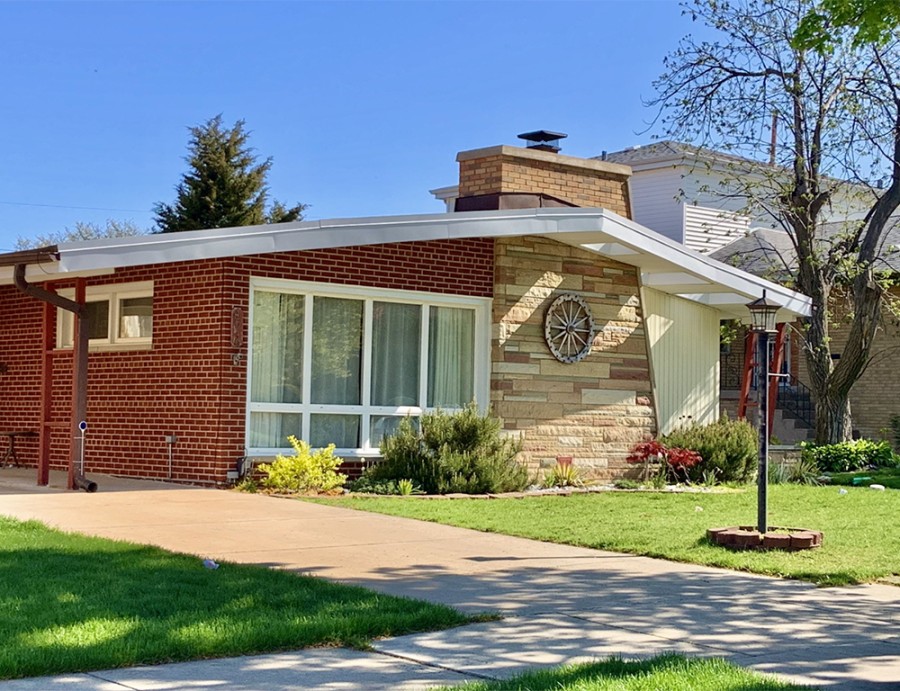 This house looks like nothing has changed, not even the wagon wheel hanging on the front, since it was built in 1962. A shallow V-shaped roof overhang is punctured with skylights that cast changing shadows on a façade that mixes brick, multicolored lannon stone and wood siding. And we get more of those support posts that are built at an angle just because. 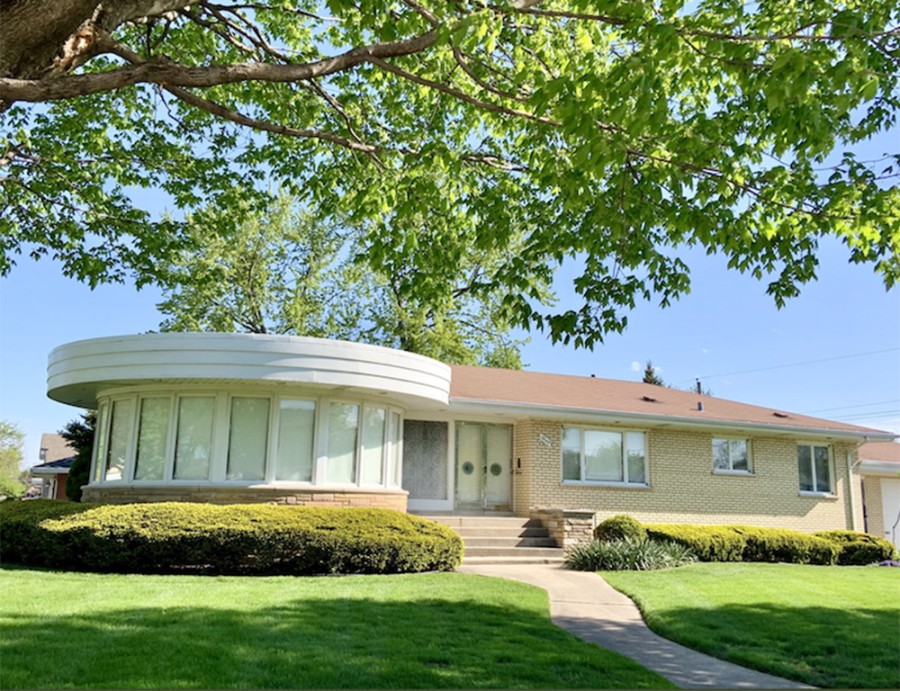 An otherwise conventional ranch house, this home features a round room — like a 1960s vision of a spaceship — attached at one end. It was built in 1968. The round room is the living room, a very nice place to look out on the neighborhood at all angles, says the homeowner who’s lived there since 1979.

Next: Take Karlov Avenue down to 102nd Street. Turn left, go a couple of blocks and turn right on Pulaski Road. Stop to bask in the glory of these three apartment buildings. All are turned sideways to the street. Passing traffic sees three large, end walls decorated with giant murals, and simple geometric designs in blue, black, red and white glazed brick.

Next: If you want to see another use of brick in geometrical designs, go to the next block south, where the sides of the apartment buildings have brick “zippers” running up their sides. But that’s a brief side trip south; you’re headed back north. Our final building is a stunner of a modern church, Salem United Church of Christ, built in 1961.

I haven’t been able to find out who the architect was, but the design is magnificent. Rows of high, diamond-shaped windows peak on two sides, looking like waves on a turbulent sea, and the third side features an overhanging roof like a ship’s prow. The exterior of the stained glass windows has a concrete backing that makes it look like a stylized mid-century monotone mosaic. The flat-topped, single-story sections flank the glass, enhancing the image of a ship at sea. And on a cornerstone, 1961 is carved in clunky cartoon lettering.

There are dozens of midcentury houses scattered around the city and the suburbs built by prominent architects. Find some of them in Modern in the Middle: Chicago Houses 1929-1975, by Susan Benjamin and Michelangelo Sabatino.

Dennis Rodkin is a residential real estate reporter for Crain’s Chicago Business and Reset’s “What’s That Building?” contributor. Follow him @Dennis_Rodkin. Mary Hall designed and produced the web version of this story. Follow her @hall_marye.

A representative for Vistria declined to comment. Founded in 2013 and led by Marty Nesbitt and Kip Kirkpatrick, Vistria manages more than $8 billion in assets and invests across health care, education … END_OF_DOCUMENT_TOKEN_TO_BE_REPLACED