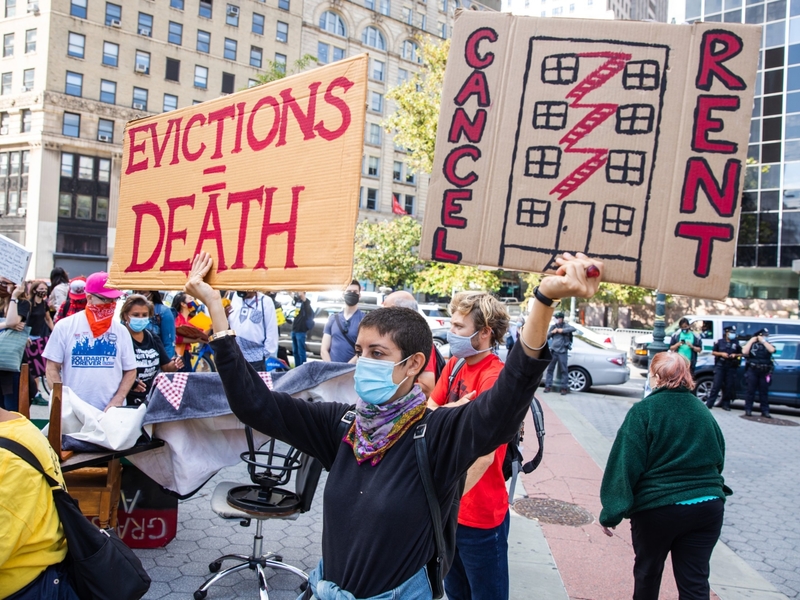 The CDC said the new ban, which will be in place until Oct. 3, would allow more time for the federal government and states to enact a rental assistance program that’s suffered bureaucratic delays and for more Americans to be vaccinated against the virus.

An increase in evictions, Walensky said, “could increase the likelihood of new spikes in SARS-CoV-2 transmission. Such mass evictions and the attendant public health consequences would be very difficult to reverse.”

The move shows the extent to which the spread of the delta variant has upended the Biden administration’s agenda. President Joe Biden earlier said the CDC announcement was expected, but warned that the new ban would face legal challenges and may be found unconstitutional.

Biden said he hoped the measure would buy time for the administration and states to dole out money from a $47 billion rental assistance program that has languished since Congress approved it late last year. The new moratorium “is likely to face obstacles,” he said at the White House, given indications by a majority of justices on the Supreme Court that the CDC’s expired ban wasn’t legal.

He said his administration has been urging states and localities to more quickly distribute the billions of dollars Congress provided to help struggling renters and landlords.

The new moratorium will cover about 80% of U.S. counties and 90% of renters, a person familiar with the matter said.

Progressives were angered when the White House called for Congress to act on an extension of the previous moratorium on Thursday, just two days before it expired. And one liberal Democrat, Representative Mondaire Jones of New York, criticized Biden’s rollout of the latest ban.

“It is odd, I think, to raise issues about the constitutionality of your own executive action shortly before making that executive action,” he said, predicting that lawyers for landlords who challenge the moratorium would cite Biden’s words in their court filings.

“That is not the behavior, that is not the commentary of someone who is actually trying to help people,” Jones said. “And it’s really frustrating to hear that kind of language come from the president of the United States.”

But the move to issue a new eviction moratorium was applauded by other Democratic lawmakers and housing advocates. House Speaker Nancy Pelosi called it a day of “extraordinary relief” and said the new ban “will provide time for the money allocated by Congress to flow, as it helps to stop the spread of the virus due the delta variant and protects families and landlords.”

The executive director of the activist group MoveOn.org, Rahna Epting, said pressure from progressive lawmakers had forced the Biden administration to act. She cited Representative Cori Bush of Missouri, who slept on the steps of the Capitol for several nights beginning on Friday to protest the expiration of the previous ban.

“She showed us the urgency and the substance of this and how it will affect millions of people. This could have quietly gone into the night if she had not organized and protested,” Epting said.

The Biden White House faced days of harsh criticism from its own party for the lapse in the eviction moratorium on July 31. Advocates said millions of Americans potentially could be forced from their homes as Covid-19 cases surged.

The White House spent days trying to explain the legal reasoning behind an initial CDC decision that it couldn’t issue another extension and sent top officials to Capitol Hill, including Vice President Kamala Harris and Treasury Secretary Janet Yellen, to answer lawmakers’ questions.

Earlier Tuesday, Yellen faced considerable anger from House Democrats, who demanded the administration take immediate action to extend the ban on evictions, according to multiple people who participated in the call.

Yellen stressed that the administration was focused on getting states and localities to more quickly distribute the rental assistance Congress has already approved.

Biden said that “at a minimum” litigation over the new moratorium “will give some additional time while we’re getting that $45 billion out to people who are, in fact, behind in the rent and don’t have the money.”

A representative for Vistria declined to comment. Founded in 2013 and led by Marty Nesbitt and Kip Kirkpatrick, Vistria manages more than $8 billion in assets and invests across health care, education … END_OF_DOCUMENT_TOKEN_TO_BE_REPLACED