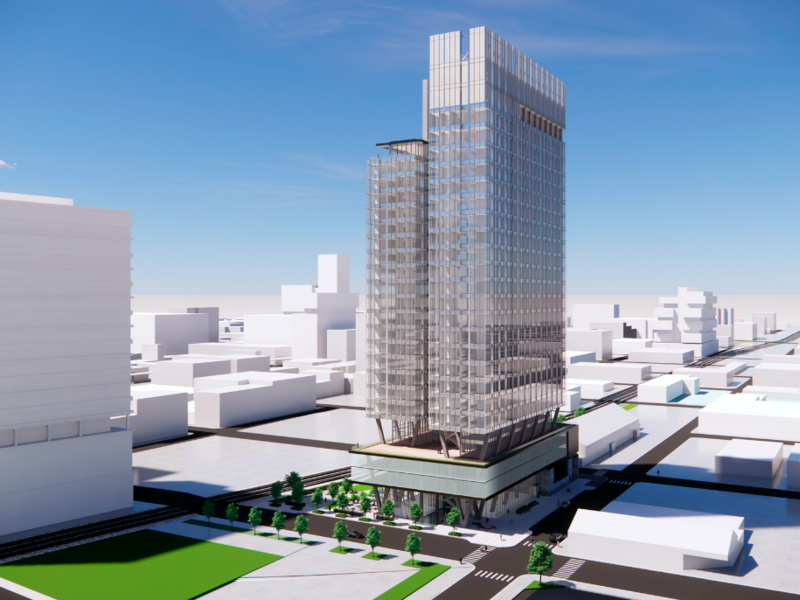 A finalized deal would be a watershed moment for the gritty-turned-trendy corridor, a move some industry experts liken to Google’s move to the neighborhood—the event that set off Fulton Market’s transformation into a corporate destination. While other professional services firms with smaller office footprints including Kroll (formerly Duff & Phelps) and Ernst & Young have leased space in the neighborhood, BCG would be by far the largest and highest-profile company from that sector to leave a traditional central business district building for Fulton Market. That could push other white collar-dominant companies to consider a neighborhood better known for tech-centric tenants.

Just as noteworthy would be Boston Consulting’s commitment to a site that is separated from Fulton Market’s main drag by Metra tracks. The firm would be the first major tenant to lease office space north of the rail running through the neighborhood, a sign that a new corridor of office users could form along the district’s northern border.

A Sterling Bay spokeswoman declined to comment and a spokeswoman for Boston Consulting did not provide a comment.

Sources said Boston Consulting is targeting the move to Sterling Bay’s new building while also weighing the prospect of signing a new lease in its current one, where it has been since the glassy 1.3 million-square-foot tower opened in 2009.

Its departure would be a gut punch to the tower’s owner, Newport Beach, Calif.-based Irvine, which recently saw anchor tenant Kirkland & Ellis announce it will leave the building for the new Salesforce Tower under construction just more than a block away.

If Boston Consulting follows Kirkland out the door, Irvine would have a block of more than 850,000 square feet of offices to market to new users.

That could be compelling for a massive tenant looking for a big space in a relatively new building downtown, but it is also a daunting challenge as the rise of remote work during the COVID-19 pandemic has slashed demand for workspace. Vacancy at downtown office buildings at the end of the third quarter rose to a record-high 20%, according to data from brokerage CBRE.

Boston Consulting’s relocation would also underscore the premium that tenants are putting on brand-new buildings designed for the post-COVID world, given that it would be leaving a building that is considered among the highest-quality in the city.

Irvine bought the 60-story building in 2014 for $850 million in what was then the highest price ever paid for a Chicago office building. An Irvine spokesman couldn’t be reached.

Sterling Bay was said to be targeting companies like Boston Consulting when it recently redesigned its plan for 360 N. Green by shrinking the size of the floors and adding nine floors to the proposal to make it 26 stories. Professional services companies and law firms tend to avoid building with massive floor plates, opting instead for those with more window lines for offices.

Sterling Bay is looking to jumpstart its Green Street building after filling up another office building at 333 N. Green St. with tenants, including the developer’s own headquarters. Sterling Bay is also under construction on a 200,000-square-foot office building nearby at 345 N. Morgan St., roughly half of which has been pre-leased to supply chain management company Havi Group.

Here is a new way you can watch local news, 24 hours a day, seven days a week – for free!  NBC 5 has launched NBC Chicago News on Peacock. Here, you will see around-the-clock local news coverage. … END_OF_DOCUMENT_TOKEN_TO_BE_REPLACED

Proper Rate, the joint venture by Guaranteed Rate and @properties, has named Rich Honquest as a new vice president of mortgage lending. In the position, Honquest will be originating loans in the … END_OF_DOCUMENT_TOKEN_TO_BE_REPLACED

Tuition for out-of-state and international freshmen will increase by 2.5% in Urbana-Champaign, 1.8% in Chicago and 1.5% in Springfield. Tuition at U of I was previously frozen from 2015-2019 and in … END_OF_DOCUMENT_TOKEN_TO_BE_REPLACED