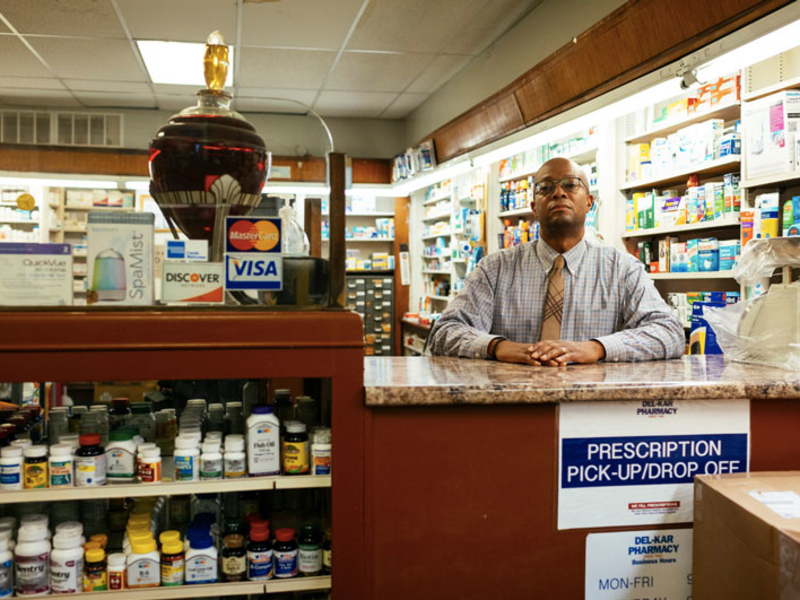 Chicago has encouraged pharmacies to locate in underserved areas — with little success. Qato pointed to a CVS branch that in 2010 received nearly $1 million in incentives to open in East Garfield Park. A nearby independent drugstore quickly closed, and the CVS shut its doors several years later, creating a pharmacy desert.

Illinois launched a program in 2019 to subsidize pharmacies in underserved urban and rural areas. But, Qato said, the program doesn’t adequately target neighborhoods at risk of becoming pharmacy deserts and excludes large chain pharmacies, which may be the only drugstores remaining in a neighborhood.

A year into the program, she said, only three of 80 eligible pharmacies in Chicago have received funds. Muldrow said he hadn’t heard of the program.

Some business strategies create de facto deserts. Late last year, the health insurer Aetna, owned by CVS Health, began preventing its Medicaid patients in Illinois from filling prescriptions at Walgreens pharmacies. As a result, some patients could no longer use the closest drugstore.

Dr. Thomas Huggett, a family physician at the Lawndale Christian Health Center on the West Side of Chicago, said some of his patients had trouble getting their medications in the first month of the new policy. One patient, who was homeless and had been diagnosed with severe mental illness, couldn’t get his prescription filled. Another had to take two buses to get his injectable antipsychotic medication. A third patient couldn’t get Suboxone, a treatment for opioid addiction.

“In the middle of one of the hotter spots in the country for opioid overdoses on the West Side of Chicago, it’s hard to imagine how anybody could justify it,” Huggett said.

In urban areas, Illinois regulations require prescription insurance plans to have at least one in-network pharmacy within a 15-mile radius or a 15-minute drive of their enrollees. But that can be too far to be practical for many customers, Huggett said.

“The majority of patients who have Medicaid have Medicaid because they are poor, and they generally don’t have cars,” Huggett said. “Looking at the maps, it is just so stark to see. The CVSs are intentionally avoiding black areas of Chicago.”

CVS spokesperson Mike DeAngelis said that about half of CVS stores nationwide are in areas that rank high on the Centers for Disease Control and Prevention’s Social Vulnerability Index, which tracks poverty, lack of vehicle access and crowded housing, among other factors.

“Maintaining access to pharmacy services in underserved communities is an important factor we consider when making store closure decisions,” DeAngelis said in an email. “Other factors include local market dynamics, population shifts, a community’s store density, and ensuring there are other geographic access points to meet the needs of the community.”

James Spidle, a 66-year-old veteran with serious heart problems, walks a mile using a cane to catch a bus in the Washington Heights neighborhood, about 13 miles south of Del-Kar, to pick up his prescriptions from a Walmart.

“I do the walk back and forth as a stress test,” he said. “If I don’t have any chest pains, I keep going.”

A closer option, a Walgreens, closed in 2016. A sign on the door directed customers to another branch that was a mile away in a more affluent neighborhood and had a grocery store pharmacy across the street.

The Endeleo Institute, the community development arm of Trinity United Church of Christ, has tried to fill the gap, using church vans to drive people to the nearest pharmacies. Melvin Thompson, its executive director, listed four other chain pharmacies that had closed within a three-mile radius of the Walgreens that shuttered in Washington Heights.

“Here we are in the midst of a pandemic, and we’re losing even more of these vital services in communities that can’t afford to lose,” he said. “It’s citywide, but it just seems to be relegated to Black and brown communities.”

Walgreens officials did not answer questions about how the company decides to close stores, but said that in metro Chicago about 99% of Chicagoans live within 2 miles of one of their stores. Walgreens spokesperson Kris Lathan said the company allocated $35 million to reopen 80 stores in Chicago damaged during the civil unrest after the murder of George Floyd in 2020.

“All but two of those locations have reopened,” she said. “The remaining two will open in the first half of 2022.”

Democratic state Rep. La Shawn Ford said pharmacy closures represent a loss of health care access for the community. “The pharmacy is not just a place to pick up medicine, it’s a surrounding of health care,” he said. “Who’s going to talk to that person when they get their medicine mail-delivered?”

It can also be a lifeline in other ways. During the pandemic, when indoor dining was shut down, Muldrow set up an outdoor grill and served burgers, tacos and other food. That showed him how much the neighborhood needed him — and for a lot more than medications. He is planning an expansion, to include a bodega with a juice bar and restaurant.

Muldrow was also reminded that the community is there for him in return. Last year, during the civil unrest, several businesses near Del-Kar were destroyed. But, in an echo of 1968, his shop emerged unscathed.

“I didn’t have any worries. I slept real good,” Muldrow said. “The brothers over here on Lawndale, they watched over me. If you know the people, the people look out for you.”

Markian Hawryluk writes for Kaiser Health News, a nonprofit news service covering national health policy. It is an editorially independent program of the Henry J. Kaiser Family Foundation which is not affiliated with Kaiser Permanente.

Here is a new way you can watch local news, 24 hours a day, seven days a week – for free!  NBC 5 has launched NBC Chicago News on Peacock. Here, you will see around-the-clock local news coverage. … END_OF_DOCUMENT_TOKEN_TO_BE_REPLACED

Proper Rate, the joint venture by Guaranteed Rate and @properties, has named Rich Honquest as a new vice president of mortgage lending. In the position, Honquest will be originating loans in the … END_OF_DOCUMENT_TOKEN_TO_BE_REPLACED

Tuition for out-of-state and international freshmen will increase by 2.5% in Urbana-Champaign, 1.8% in Chicago and 1.5% in Springfield. Tuition at U of I was previously frozen from 2015-2019 and in … END_OF_DOCUMENT_TOKEN_TO_BE_REPLACED