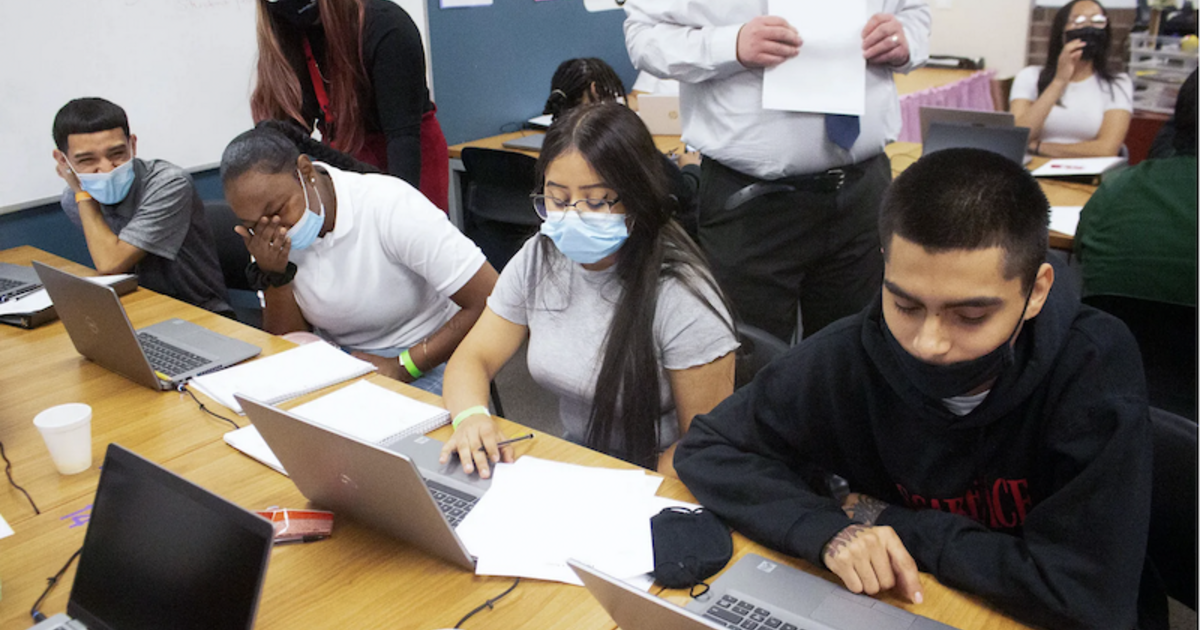 The district has steadily increased the amount of money that goes directly to schools in recent years. Last year, it added $225 million, a move officials said was possible because of an influx of federal COVID relief dollars. The district got roughly $2.8 billion across three federal stimulus packages that it has to spend by fall of 2024.

CEO Pedro Martinez said a fuller picture of how the district will spend its remaining federal dollars will emerge when it unveils its complete budget this summer and a three-year overhaul plan he will release soon.

Next year’s budget is the first that Martinez, who arrived after the school year started last fall, gets to shape, offering a glimpse at his priorities and longer-term vision for the district. He said the budget release, which comes earlier than in recent years, is the first step in a three-year district overhaul plan he is gearing up to unveil soon.

“These budgets will help our students to return to the record-breaking academic gains we saw before the pandemic,” he said at a virtual press conference, adding, “Our financial outlook is very strong.”

The Chicago Principals and Administrators Association, a frequent critic of the district, said in a statement that officials painted too rosy a picture of next year’s school budgets. The association said it has heard from dozens of principals today concerned about looming cuts to their budgets, including some totaling $100,000 or more.

“As we emerge from this pandemic our children need their school budget increased,” the group’s head, Troy LaRaviere said. “However, CPS has decided to slash them once again.”

He said the cuts reflect “callousness and neglect.”

Data the district release later on Friday shows 146 campuses saw cuts greater than $100,000. Orozco Academy, an elementary in Pilsen that lost a quarter of its students last year amid neighborhood demographic changes and a shift to magnet school status, will take an $836,000 cut. Zapata, Reilly, and Lyon elementaries, which experienced more modest enrollment losses last year, will also see cuts of more than $800,000.

The district announces draft school budgets in the spring and a final, districtwide budget in the summer. The additional school funding will include $72 million for new teaching positions that will help reduce class sizes at some schools.

The district has repeatedly increased school budget funding earmarked for special education, early childhood programs and its equity grants, cash infusions for campuses dealing with steep enrollment declines or those in neighborhoods facing economic and other hardships. The district is doing away with the term “equity grant,” which was confusing to families, officials said, but Chicago will spend $50 million to prop up the budgets of schools with small or steeply declining enrollments, a $14 million increase over last year.

The district has experienced a net loss of about 25,000 students during the pandemic, with current enrollment at 330,400 students. An unprecedented number of students — more than 53,000 — left Chicago Public Schools for other districts, private schools, and homeschooling.

The district will spend $21 million to continue to add nurse, social worker positions, and case workers, with officials saying they aim to go beyond goals spelled out in the district’s contract with the Chicago Teachers Union.

Over the years, the union and others critics have taken aim at a school budget formula in which student enrollment still looms fairly large. They say the district’s approach sends shrinking schools on the South and West sides into a spiral of lost funding, program and staff cuts, and further student losses.

But Martinez’s predecessor, Janice Jackson, argued that while the district cannot divorce budgets from enrollment entirely, it has taken major steps to make funding more equitable. Roughly half of school budgets this school year are based on pupil numbers, and 95% of campuses saw budget hikes.

Martinez said he will aim for a balanced approach. Enrollment will still count, but the district is trying to soften the budget pain for schools that are rapidly losing students.

“We put some safeguards to limit the reduction,” he said.

“We didn’t want any school to not have resources for intervention teachers, arts classes, or smaller class sizes,” he added.

The press conference featured two principals at schools with growing enrollment who saw increases in their budgets. At Emmett Till Math and Science Academy, a South Side elementary school, principal Raven Patterson-Tally said she is especially excited about a hike the school got for special teachers and support staff.

“With these resources, we’ll be more thoughtful about how we approach inclusion and other best practices,” she said.

She said her campus will also benefit from centrally budgeted dollars to continue rolling out the district’s new universal Skyline curriculum. She said teachers who piloted that curriculum at her school found it rigorous and well-connected to state academic standards.

CHICAGO (CBS) -- Chicago Police are looking for a man who tried to kidnap a woman in the city's West Loop but was thwarted by some good Samaritans. This is at least the second time this has happened … END_OF_DOCUMENT_TOKEN_TO_BE_REPLACED

Illinois homes sold somewhat faster in August 2022 than in the year prior, even as median prices rose statewide, according to new data from Illinois REALTORS®. Though statewide home sales were down … END_OF_DOCUMENT_TOKEN_TO_BE_REPLACED

“I’m not one to really tell people what to do,” said Kennedy, 35, who lives in Milwaukee and works in software sales. But if a friend tried to order a delta-8 drink, “I would tell them, ‘Absolutely … END_OF_DOCUMENT_TOKEN_TO_BE_REPLACED