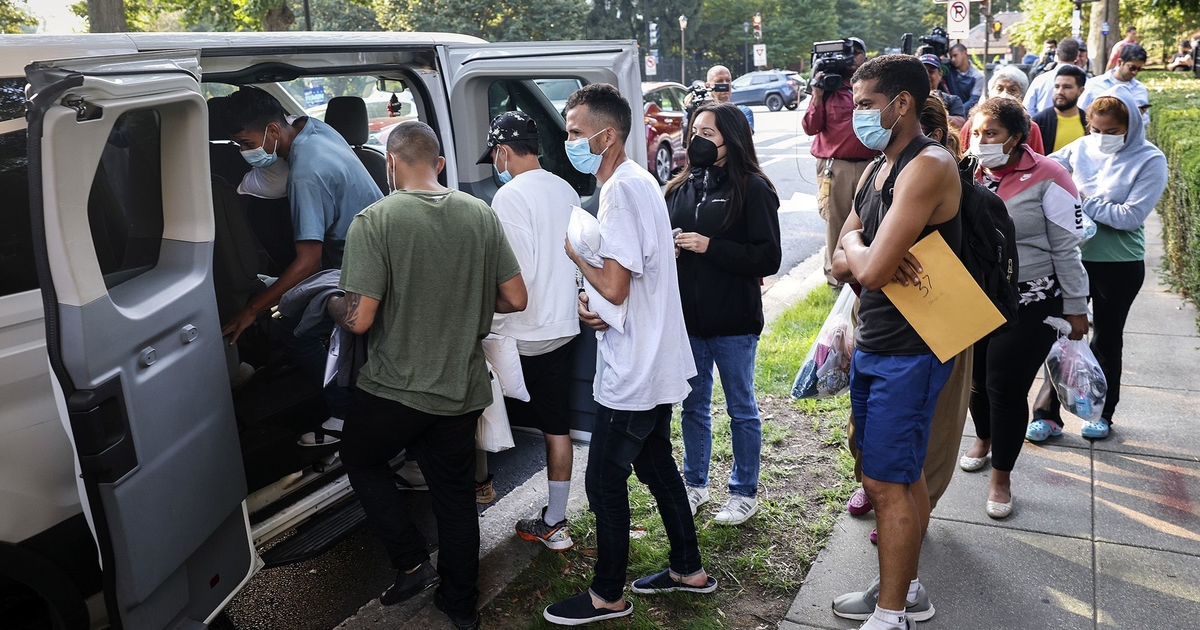 Washington DC has allocated $10 million toward a newly established Office of Migrant Services. Illinois Governor J.B. Pritzker issued an emergency disaster proclamation on Wednesday, an action that will free up transportation, housing and medical services to the around 600 asylum seekers that have arrived in the state over the last several weeks.

At least 13,000 migrants have been transported to Washington, New York and Chicago since April from Texas and Arizona. About 50 were sent by Florida Governor Ron DeSantis to Martha’s Vineyard, Massachusetts, this week. Immigrant rights groups and Democratic officials have widely criticized the relocation effort as an inhumane political stunt.

The lack of notice and already growing unhoused populations in major US cities is stressing social service departments.

New York isn’t running out of resources, Adams said when asked on CNN’s “State of the Union” on Sunday.

“We’re going to follow the law, as well as our moral obligations and responsibilities,” he said. “It’s going to be challenging — we’ve experienced some challenges in doing so — but we’re obligated by law here in the city of New York.”

The White House is helping cities that have received relocated migrants, with Federal Emergency Management Agency representatives on site to coordinate efforts to administer federal support, press secretary Karine Jean-Pierre said on Friday. She added that funding is available for local governments and non-profits though FEMA’s emergency food and shelter program to support humanitarian relief for migrants.

“We’ll continue to do what we can as a federal government to support these cities as we rebuild our asylum processing system after it was gutted by the Trump administration,” she said. “In response to repeated attempts by these Republican officials to create chaos and confusion at the border, we are working to manage the consequences.”

The White House didn’t provide specific figures on how much aid is available to the cities.

“Congress has an opportunity to reaffirm its commitment to protecting migrants and the right to seek refuge by extending funding,” the group wrote in the letter, saying that the legislative body “must ensure that communities have the tools necessary to treat migrants fairly and humanely as they flee violence and instability.”

New York is attempting to build support in real time to shelter, educate and provide healthcare to the rush of migrants. In the 2022 fiscal year, the city spent about $135.83 per day for individuals in single adult facilities and $186.01 for those in family facilities, according to the Mayor’s Management Report. The city said estimating the total cost of caring for the migrants is complicated as some of them don’t end up in the shelter system and instead may be housed in hotels.

“For months, this administration, on its own, has safely and efficiently provided shelter, health care, education, and a host of other services,” said Fabien Levy, a spokesman for Adams. “We have spoken to the federal government about reimbursement.”

Chicago, which began preparing for migrants’ potential arrival weeks before buses unexpectedly showed up at Union Station, is seeking additional financial assistance to help alleviate some of the cost burden.

Even with the added strain, mayors are encouraging the Biden administration to continue to take in refugees. Adams, Lightfoot and mayors from about 30 cities sent a letter Friday to Biden asking the President to maintain the refugees admission goal to 125,000 in 2023 and strengthen humanitarian programs.

“As cities and counties from across the country, we are at the forefront of welcoming refugees and integrating immigrants into our communities,” the mayors said in the letter. “We know firsthand that we all benefit from the tenacity, courage, diversity, and skills that refugees bring.”

To be sure, while overwhelming logistically, it may be too soon to tell whether this will bring a financial burden. The biggest US cities have budgets that stretch past the tens-of-billions and many, while flush with federal stimulus cash, also have been collecting revenue that outpaced projections.

The relocation programs have been costing Arizona and Texas as well. Governor Greg Abbott’s costs have reached over $12 million as of mid-August. Arizona, which began sending asylum seekers to Washington in May, spent $3 million in the first three months of the program.

Florida lawmakers allocated $12 million in the state budget to “facilitate the transport of authorized aliens from this state,” raising questions about DeSantis’ use of those funds for the Martha’s Vineyard relocation, according to the Washington Post. Two state Democratic lawmakers said Friday they will ask the legislature to instruct DeSantis to “cease his inappropriate use of taxpayer money,” the paper reported.

“I cannot imagine a less useful use of money,” said Linda Bilmes, a professor of public policy at Harvard’s Kennedy School. “That money could be spent on transitioning immigrants into useful, productive, members of the economy.”