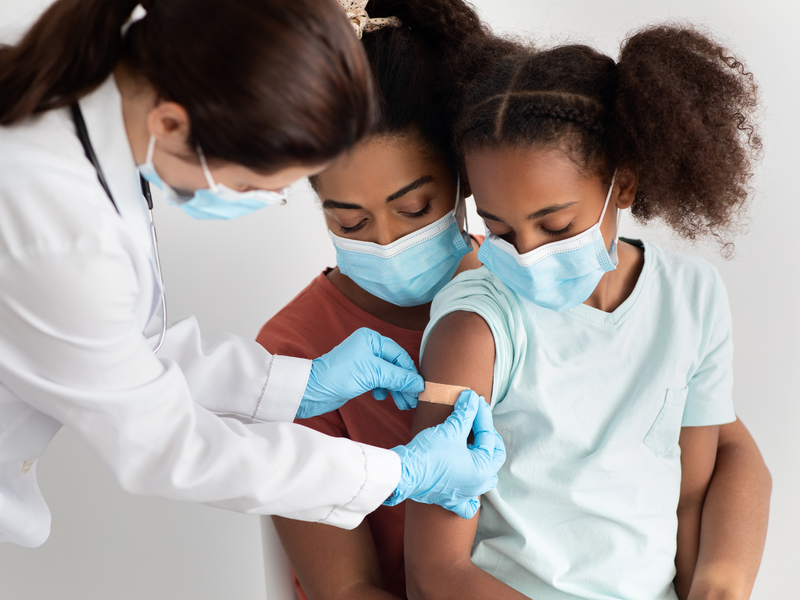 SO FAR, OVER 13% OF KIDS IN CITY GET VACCINE DOSES: Chicago officials declared Nov. 12 vaccine awareness day and made a concerted push to get kids aged 5-11 their first COVID shot so they could be fully vaccinated in time for the winter holidays. Chicago Public Schools piggybacked off the Veterans Day holiday and canceled classes the next day to encourage kids and families to get shots.

Thousands took advantage of those days off to get jabbed, according to city data. There was a surge in first-dose vaccinations among the youngest Chicagoans and a slight spike in first shots among adolescent children ages 12 to17.

On Nov. 12, “we broke a six-month vaccination record for Chicago,” CDPH Commissioner Dr. Allison Arwady said at a Tuesday press conference, adding she was “very pleased” with the uptake. “We had more than 8,300 first doses of COVID vaccine on the 12th, our single largest day for youth vaccination to date.” Those figures may not be reflected in city data for a few days.”

CPS CEO Pedro Martinez said at that same press conference that roughly 6,700 CPS students were vaccinated on Nov. 12 and just under 13,000 were vaccinated between Thursday and Saturday. Martinez said “this is the beginning” and that CPS will hold 133 vaccination events through the rest of November and December. There have been 679 total reported COVID cases among adults at CPS and 2,400 cases among students, as of November 15.

But there’s plenty of work to do: Despite the spike, a little over 13% of the city’s youngest eligible population have received their first shot.

ILLINOIS PEDIATRIC GROUP LAUNCHES NEW VACCINATION PROMOTION INITIATIVE: As the vaccination push enters the 5- to 11-year old demographic, the Illinois Chapter of the American Academy of Pediatrics, through a $5 million contract with the Illinois Department of Public Health, has launched Illinois Vaccinates Against COVID-19.

The program will support the expansion of COVID-19 vaccinations into routine patient care workflows in primary care settings, hospital urgent care centers and upon hospital discharge, the ICAAP said in a statement, with the goal of getting Illinoisans of all ages immunized at every opportunity. The program also aims to make sure providers are prepared to immunize all eligible age groups, including eligible pediatric patients.

The ICAAP will work in partnership with subgrantees, the Extension for Community Health Outcomes-Chicago at the University of Chicago and the Illinois Academy of Family Physicians. The program will include statewide training and implementation assistance to support providers and provider organizations, focusing on areas of the state with low vaccine uptake and high social vulnerability index. Providers and provider organizations can sign up at https://www.illinoisvaccinates.com/.

AMA SPEAKS OUT ON VACCINE MEDICAL EXEMPTIONS, DOCTORS’ DISINFORMATION: At its special meeting of the house of delegates, the American Medical Association resolved that only licensed physicians should determine whether a person should receive a medical exemption from vaccines and said it would work on issues surrounding doctors who deal in COVID disinformation.

The policy comes as tens of thousands of people have cited medical reasons for seeking exemptions to state and municipal COVID mandates. The nation’s largest physicians organization’s official policy states that only licensed physicians should have the medical authority and the power to grant these exemptions.

“Vaccine hesitancy has played an unfortunate role in extending the COVID-19 public emergency. Failing to get vaccinated has resulted in tragic and unnecessary deaths. To protect everyone, we must be sure that a trained, licensed physician is making the judgment on whether a person actually warrants an exemption,” Dr. Willie Underwood III, a member of the AMA Board of Trustees.

The AMA said in a statement that the term “medical authority” can take many forms, with some states allowing alternative practitioners, such as naturopathic providers, to approve vaccine exemptions. The AMA already has a policy opposing nonmedical—religious, philosophic, or personal belief—exemptions from immunizations, since, it says, such exemptions endanger the health of the unvaccinated individual and the health of the community at large.

Terms of the acquisition, which was announced Monday, were not released. The move will allow Kaufman Hall to advise health systems on real estate strategies for the properties they own, lease and operate.

“Health care real estate as a component of the broader real estate industry has been a relatively stable and attractive opportunity for real estate investors, so it’s become a popular place to deploy capital,” Turner said. “An independent strategic advisor with an in-depth understanding of the sector is vital.”

NORTHSHORE RULING ON RELIGIOUS EXEMPTIONS EXTENDED: Judge John F. Kness of the U.S. District Court of the Northern District of Illinois has extended by two weeks a temporary restraining order barring NorthShore University Healthsystem from firing 14 employees who refuse to be vaccinated.

Fourteen “Jane Doe” workers at the Evanston-based health system say NorthShore discriminated against them by denying religious exemptions from its vaccine mandate. They are represented by Liberty Counsel a conservative Christian law firm based in Florida.

Judge Kness was cognizant of the fact that any ruling on the suit would be appealed, so chose to hear arguments Tuesday but delay a ruling on the request for a more preliminary injunction request, said Liberty Counsel Chief Litigation Counsel Harry Mihet. Liberty Counsel has asked the judge to give the lawsuit class-action status to include any NorthShore workers who had not been allowed an exemption. Mihet said the judge plans to rule on both a preliminary injunction, which would run through the course of the lawsuit and on the question of class-action status.

Mihet said he is ultimately looking for a multimillion-dollar judgment against NorthShore for the entire class of employees for denying them religious liberties.

NorthShore said it had no comment on the pending litigation on Tuesday. In a previous statement NorhtShore said that “of the 17,000 NorthShore team members, a small fraction requested exemptions. We reviewed each individual request, implementing a thorough process and using criteria applied consistently, and criteria specifically indicated on the application itself.”

VILLAGEMD EXPANDS ITS WALGREENS CLINICS IN TEXAS: VillageMD said it plans to open more than 20 Village Medical at Walgreens primary care practices in Dallas area Walgreens pharmacies over the next year. Chicago-based VillageMD opened its first Walgreens location in Dallas on Oct. 26, with several more openings to follow in November and December. VillageMD has clinics in Deerfield-based Walgreens’ pharmacies in four Texas markets, Dallas Houston, El Paso and Austin and 11 other markets around the country.

Back in October, Walgreens Boots Alliance took a majority stake in VillageMD with a $5.2 billion investment. It now owns 63% of the company.

NORTHWESTERN STUDY: HEART DISEASE  KILLING MORE SMOKERS THAN LUNG CANCER: Smokers are more likely to die, without warning, of a heart attack than they are to die from lung cancer, according to a new Northwestern Medicine study.

“This is so important because in the U.S., one in five people still report using tobacco, which may have increased with the added stress of the pandemic,” lead study author Dr. Sadiya Khan, an assistant professor of medicine at Northwestern University Feinberg School of Medicine and a Northwestern Medicine cardiologist, said in the statement.

MIDWEST CARDIOVASCULAR AWARDING SCHOLARSHIPS: The Naperville Midwest Cardiovascular Institute is awarding educational scholarships to those interested in continuing their education online to become medical assistants, MCI said in a statement.

The online learning scholarships were developed with Fletcher Technical Community College in Schriever, La. and include one semester of online didactic training followed by one semester of 500+ clinical hours at an MCI location. Upon graduation, students are awarded a Certificate of Technical Competency in Medical Clinical Assistant and are eligible for the Certified Clinical Medical Assistant certification exam through National Healthcareer Association.

Eligibility details and application information can be found at www.cardio.com/career-opportunities.

The former Catholic Charities of Chicago property is being rebranded as Symphony Palos Park, the statement said. Symphony worked closely with Catholic Charities and Holy Family Villa on a transition that includes a commitment to continuing “the facility’s long-standing religious and spiritual traditions at the property’s chapel,” the statement said.

JOIN US FOR CRAIN’S HOSPITAL CEOs BREAKFAST: Hear how Chicago area hospitals have been weathering the storm and what’s forecasted on the horizon at the Dec. 14 Crain’s Hospital CEO Breakfast. Register now for the in-person event.

PEOPLE ON THE MOVE

• Dr. Thomas Inge has been named surgeon-in-chief of Ann & Robert H. Lurie Children’s Hospital of Chicago. Lurie Children’s said in a statement that Inge is an internationally recognized surgeon-scientist and is renowned for his expertise in pediatric bariatric surgery and research.

Inge comes from Children’s Hospital of Colorado, where he served as associate surgeon-in-chief and member of the hospital’s executive leadership team. He was also the division chief of Pediatric Surgery, director of the Adolescent Bariatric Surgery program, and a professor of Surgery and Pediatrics at the University of Colorado Denver School of Medicine.

• Destiny Lee has been named policy analyst and legislative liaison for the Health Care Council of Illinois. Before joining HCCI, Lee was a policy and budget analyst in the office of the Illinois Senate President.

President Joe Biden speaks as he announces that he is nominating Jerome Powell for a second four-year term as Federal Reserve chair, during an event in the South Court Auditorium on the White House … END_OF_DOCUMENT_TOKEN_TO_BE_REPLACED

Research has shown that women are most likely to shop for milk substitutes, and so the all-women Planting Hope, which counted food industry financier Larry Levy and other men as early investors, is no … END_OF_DOCUMENT_TOKEN_TO_BE_REPLACED