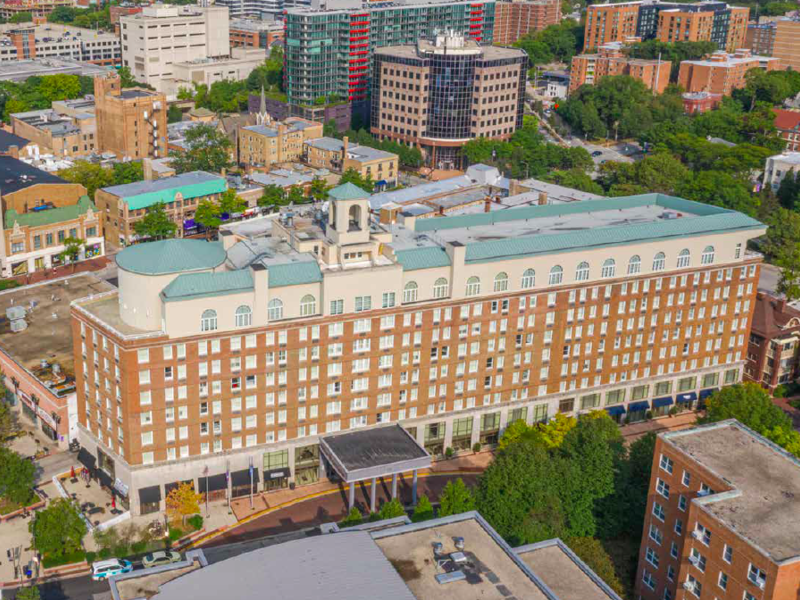 When the foreclosure complaint was filed, Olshan indicated to special servicer Midland Loan Services—which is overseeing the mortgage on behalf of CMBS bondholders—that it planned to hand over the keys to the property to resolve the matter. Instead of putting the property on its books through a deed-in-lieu of foreclosure, Midland is now working with Olshan to try to sell it to recoup as much of the lender’s investment as possible.

There is no listing price for the property, but sources said it’s likely to trade below the balance of the outstanding loan. As of February, the loan balance was just under $39 million.

A sale below that amount would mark a hefty loss for Olshan, which bought the hotel in 2015 for $60 million. The hotel performed well prior to the COVID-19 pandemic, with net cash flow of nearly $3 million against less than $2.6 million of debt service, according to Bloomberg loan data.

But the pandemic hammered its operations, with net cash flow during the 12 months ended in June 2020 falling below $1.3 million, or less than half of its debt service liability over that period. Olshan stopped making loan payments in August 2020, according to the foreclosure complaint.

Olshan is one of many Chicago-area hotel owners dealing with financial distress as the pandemic has brutalized their operations. In downtown Chicago, the owners of the Palmer House Hilton, JW Marriott Chicago and the Hotel Felix have been hit with foreclosure lawsuits.

Some hotel owners have been able to work out agreements with their lenders to try to buy time until the pandemic subsides. Some banks have been flexible or don’t want to take control of hotels during the public health crisis. But trustees for CMBS loans have less wiggle room, since they oversee mortgages for many properties that are tied together.

Olshan worked out a deal early in the pandemic with a master servicer overseeing the loan that allowed it to make lower mortgage payments for several months, Bloomberg data shows. The hotel turned to renting rooms to Northwestern University undergraduate students in fall 2020 to generate some business before the foreclosure complaint was filed.

Spokesmen for Olshan and Midland couldn’t be reached.

JLL is framing the hotel as an opportunity to add value by renovating the property and potentially rebranding it under one of Hilton’s lifestyle hotel brands, such as DoubleTree or its Tapestry Collection.

The hotel includes almost 20,000 square feet of meeting space, including the 5,848-square-foot Grand Orrington Ballroom, which was heavily damaged from a roof leak during the pandemic and is now in “shell condition,” according to the JLL flyer. The flyer portrays that space as a “blank slate renovation opportunity.”

The hotel’s ground floor is home to the Farmhouse Evanston restaurant, and the building includes over 3,000 vacant square feet of street-level retail space in two spaces, one of which features a full kitchen, according to the flyer. The property also includes an adjacent 178-space parking garage.

Here is a new way you can watch local news, 24 hours a day, seven days a week – for free!  NBC 5 has launched NBC Chicago News on Peacock. Here, you will see around-the-clock local news coverage. … END_OF_DOCUMENT_TOKEN_TO_BE_REPLACED

Proper Rate, the joint venture by Guaranteed Rate and @properties, has named Rich Honquest as a new vice president of mortgage lending. In the position, Honquest will be originating loans in the … END_OF_DOCUMENT_TOKEN_TO_BE_REPLACED

Tuition for out-of-state and international freshmen will increase by 2.5% in Urbana-Champaign, 1.8% in Chicago and 1.5% in Springfield. Tuition at U of I was previously frozen from 2015-2019 and in … END_OF_DOCUMENT_TOKEN_TO_BE_REPLACED