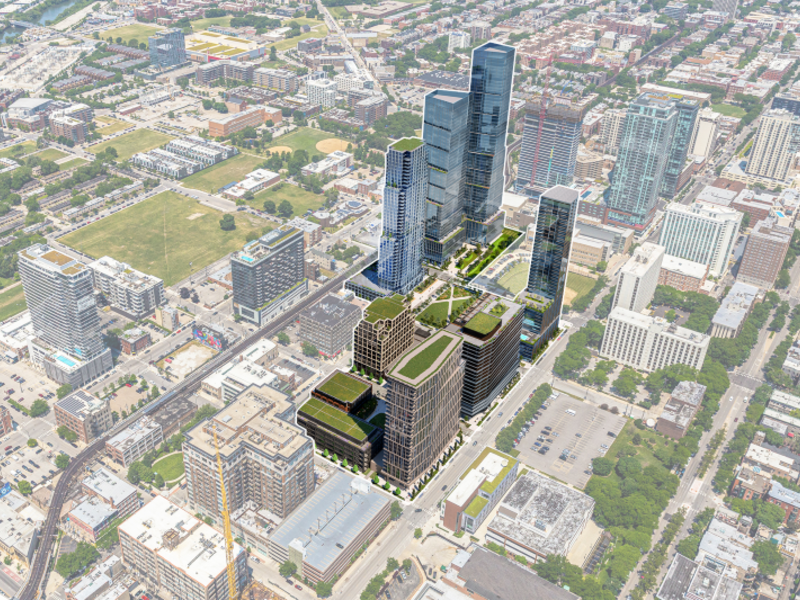 The market could be improving just in time for One Chicago. Designed by Goettsch Partners and Hartshorne Plunkard, the project includes two towers, one at 14 W. Superior St., rising 76 stories, and the other at 23 W. Chicago Ave., rising 48. At 971 feet, the 76-story high-rise is the eighth-tallest building in Chicago, according to the Council on Tall Buildings & Urban Habitat.

One Chicago’s condos, all on the upper floors of the tall tower, start at $1.7 million. For $28 million, you can buy a two-floor, 10,400-square-foot penthouse at the top of the building with 1,000 square feet of terraces.

“It’s got views of the world,” Letchinger said. But it’s “not for those who are fearful of heights.”

JDL started marketing the condos in 2020 but put sales on hold last April as the pandemic brought the city to a halt. The developer restarted sales this month, and buyers have signed contracts for about a dozen condos so far, Letchinger said.

The One Chicago apartment leasing office opens the weekend of June 5-6. Letchinger said he expects the first residents to move in Oct. 1, about six months ahead of schedule.

With rents averaging about $4 per square foot, near the top of the market, it will be an expensive place to live. One Chicago will include 22 units classified as affordable under the city’s affordable-housing ordinance.

Eager to fill their new buildings, developers typically offer tenants one or two months of free rent. But JDL is confident enough about the market that it doesn’t plan to offer incentives at the start.

He’s hoping that a Whole Foods Market and Lifetime Fitness at the base of One Chicago will help generate some of that demand.

“You don’t need to leave the building,” he said.

Harmon finally adjourned the Senate with the prediction that a bill ultimately would pass. Environmental advocates and union representatives would meet "as soon as tonight" to continue to try to hash … END_OF_DOCUMENT_TOKEN_TO_BE_REPLACED

Who ever thought that we could transition so quickly from high to low inventory? Of course, there are still houses for sale. For instance, Winnetka currently has 46 listed homes, some of which … END_OF_DOCUMENT_TOKEN_TO_BE_REPLACED