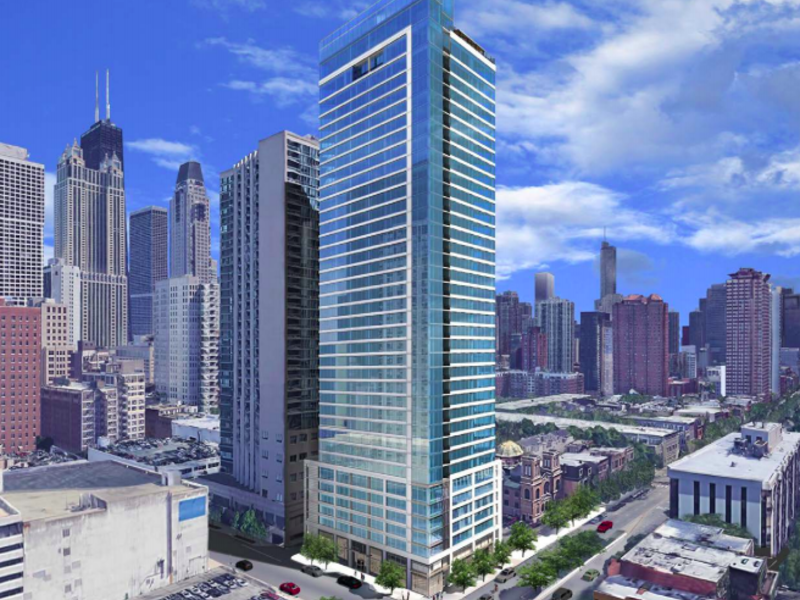 “Your concerns related to the existing congestion on Maple Street, the current context of predominantly lower-rise structures in the surrounding blocks and overall compatibility of this proposal at this location were carefully considered by both the developer and my office,” wrote Hopkins, who represents the neighborhood.

One other reason residents at 111 W. Maple might have opposed the project: Fifield’s tower would have blocked views from west-facing units. The project also would have included an eight-story community center for the Annunciation Greek Orthodox Cathedral, its neighbor to the south. The high-rise would have risen on the north side of the site.

Fifield hasn’t ruled out another revision to its plans. The developer is considering whether it could move the tower farther south, an idea that seemed acceptable to residents of 111 W. Maple, chairman and CEO Steve Fifield wrote in a text.

“We need to study it to see if feasible,” he wrote.

Fifield needs a zoning change from the city for any big development on the site, a process that includes community meetings and requires the approval of the Plan Commission and Chicago City Council. Under the City Council’s long-standing custom of aldermanic privilege, aldermen can effectively veto proposed projects in their wards even before the Plan Commission considers them. Fifield’s decision to withdraw its plans takes the pressure off Hopkins to formally reject its proposal.

Hopkins did not respond to a request for comment.

If approved, the Maple Street project would have been Fifield’s only active apartment development in Chicago. The firm is spending more time these days pursuing opportunities in other markets like Denver, Phoenix and Tampa.

A representative for Vistria declined to comment. Founded in 2013 and led by Marty Nesbitt and Kip Kirkpatrick, Vistria manages more than $8 billion in assets and invests across health care, education … END_OF_DOCUMENT_TOKEN_TO_BE_REPLACED