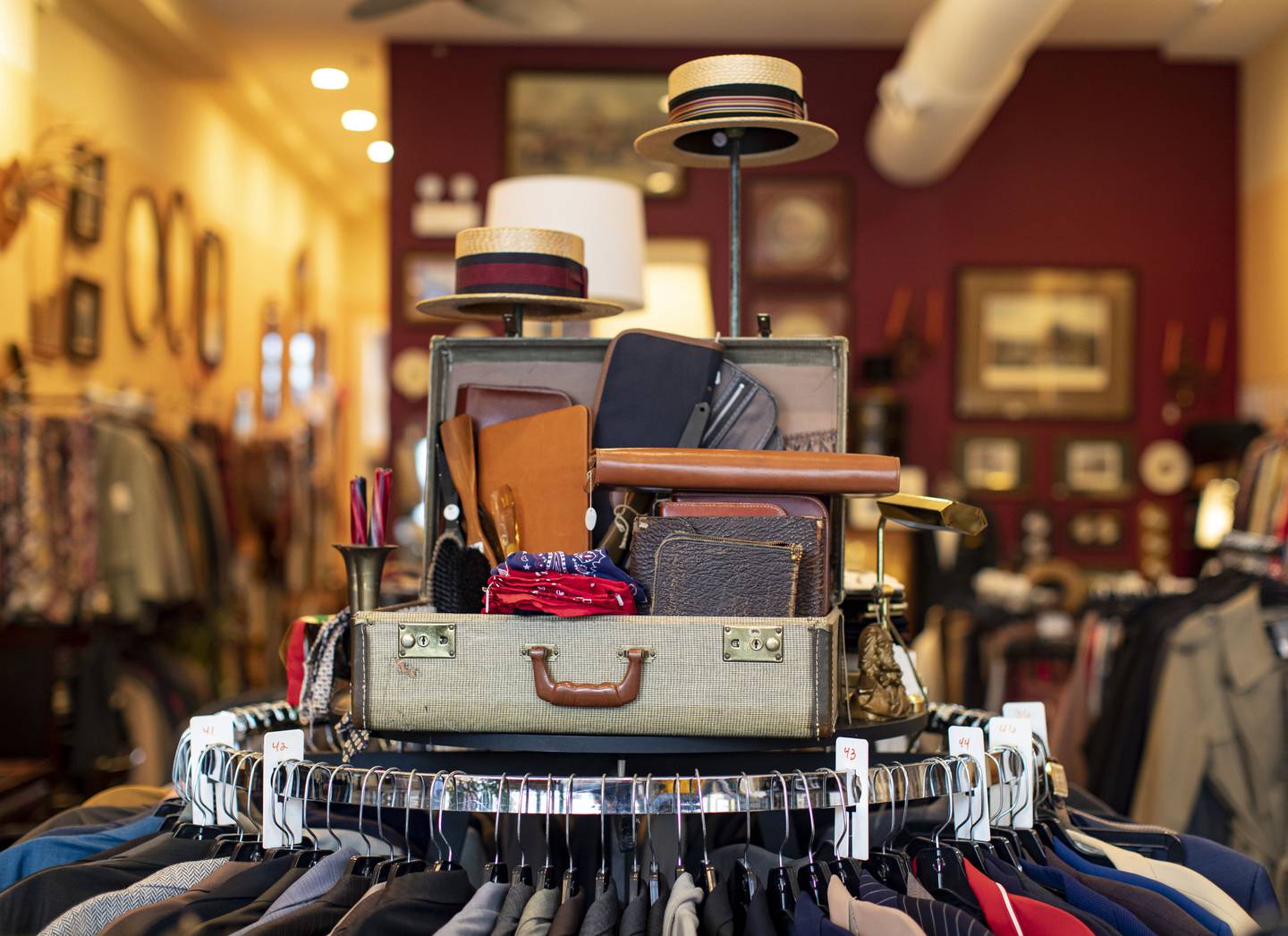 A surprise identical twin, Richard Biasi, 52, has always battled for his own identity. He often jokes he got the “yolk” of the egg if you ask him about being his brother’s double.

After working more than a decade creating his brand as a top sales associate at retail stores such as Neiman-Marcus and Bloomingdale’s, Biasi grew tired of grueling sales expectations and decided to open Richard’s Fabulous Finds, a store specializing in vintage men’s suits, appropriately enough in a 100-year-old building.

His most recent renaissance from posh to used found Blasi switching to secondhand clothing after making a career selling Ralph Lauren, Donna Karan and other top designers. He fought to bring life to his other talent, bringing a modern twist to vintage suits.

“After racking up more than $40,000 in sales at one of Bloomingdale’s presale events, I got tired of living off of coupon sales and deals,” Biasi said. “I guess I am proving that you don’t have to give the store away in order to make money.”

He found the hole in the retail market and began filling it, he said.

“When you start anything you have to invest in it,” Biasi said. “You have to find what’s not being offered.”

And he did — vintage suits.

Starting off, Biasi frequented estate sales and gathered items from people he’s known throughout the years. Not only did he look for suits — he also kept an eye out for other great pieces.

“The items have to be wearable and in good shape. My shop doesn’t smell like dead people,” he said with a chuckle, noting that everything is professionally cleaned before it is placed on a sale rack.

“I show my customers that there is value in vintage wear,” he said.

His business, at 2545 W. North Ave., has been in the Humboldt Park neighborhood for eight years. It recently underwent a gut rehab.

And, like other Chicago business owners, Biasi had to quickly figure out how to survive the pressure of the COVID-19 pandemic. He utilized the patio space at his business, which has a view of the downtown skyline, renting it out to host micro-weddings, birthday parties and baby showers.

Even though things seemed to pan out financially, there were several problems with the building’s structure, according to Blasi. After the 78th water leak happened at his store, Biasi said he decided to leave the pity party he was throwing for himself.

“I told myself, ‘You got to make it,’” he recounted while rehashing mounds of frustration in dealing with the previous owners of the building that houses his business.

While they attempted to make repairs to address issues, “they put a Band-Aid on everything,” he said. Once the floor started sinking in, it motivated Blasi to look for funding to help rehab the structure he had grown to love.

He quickly jumped into action, finding help in the SBIF Grant, a small business improvement fund set up to assist small business owners. At least $100,000 was released to the building’s new owner, making a gut rehab possible, Biasi said.

The Small Business Improvement Fund (SBIF) provides funding for permanent building improvements and repairs across the city. Offered by the city’s Department of Planning and Development (DPD) to tenants and owners of industrial and commercial properties, SBIF grants are funded by tax increment financing revenues in designated TIF districts citywide.

According to the SBIF website, program participants can receive grants to cover between 30% and 90% of the cost of remodeling work, with a maximum grant of $150,000 for commercial properties and $250,000 for industrial properties. The grant, administered by SomerCor on the city’s behalf, does not have to be repaid.

A selection of merchandise on display at the vintage menswear and decor shop Richard’s Fabulous Finds on North Avenue in Humboldt Park. (Brian Cassella / Chicago Tribune)

“Whether you’re an entrepreneur pursuing your dreams in a start-up space, or a long-time employer looking to revitalize your business, the SBIF program could be the key to your future,” reads a statement from Mayor Lori Lightfoot on the city’s website.

The SBIF has provided $105 million to more than 1,400 small businesses across Chicago since it started in 1999, according to the website.

Before the grant was approved for Richard’s Fabulous Finds, Biasi did his homework on the property. The building’s foundation was repaired, an old water heater was replaced, and tuckpointing work was completed on the structure through the grant, he said.

He also used that time to become an intimate member of the community where he does business and lives. During his research, he discovered a property on his block where an Italian restaurant was once run, and another property where the Three Stooges fruit stand operated, he said. A fellow Humboldt Park resident gave Blasi an old martini shaker found on the site of the Italian restaurants.

In his life as a business owner, Biasi hasn’t forgotten what was learned during his time on the Magnificent Mile. He embraces ideas about building a strong clientele, and knows the power of being truthful to help find the best fit and style to compliment the customer, he said.

His beliefs have also afforded him opportunities to be involved in the big screen. Biasi has provided wardrobe pieces for the television shows “Lovecraft Country” and “Fargo.”

Richard’s Fabulous Finds, which has garnered a 5.0 rating on Yelp, is a one-man show, where he spends his time finding men the perfect suit.

“When you wear vintage you get a one-of-a-kind,” he said.

Sometimes it’s hard for Biasi to part with a suit, which he calls “seller’s remorse.”

“If I love it, I know somebody else will love it and it needs to live again.”

Editor’s note: The reporter knew the subject from a working relationship during a previous job in retail.

CHICAGO — Former Ukrainian troops are visiting Chicago to pay tribute to their brothers-in-arms this Memorial Day Weekend. Ukrainian veterans who fought in places like the Donbas region and the … END_OF_DOCUMENT_TOKEN_TO_BE_REPLACED

Hart was promoted to president from general counsel in 2020, but the CARES Act compensation limits were based on 2019 pay. His total compensation last year was estimated at $3.5 million, mostly … END_OF_DOCUMENT_TOKEN_TO_BE_REPLACED

After an often-contentious floor debate, the Chicago City Council has passed a new weekend curfew for the city’s residents, moving it back from 11 p.m. to 10 p.m. on weekends. The new ordinance will … END_OF_DOCUMENT_TOKEN_TO_BE_REPLACED