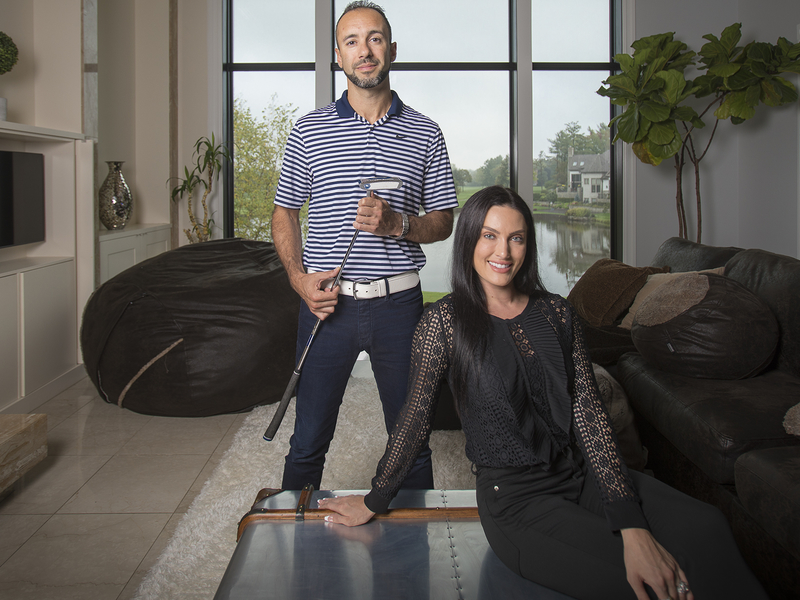 The Venas bought the five-bedroom house on Hillburn Lane in Wynstone for its two pools, indoors and out, ample indoor space for working at home and 2.3 acres of outdoor space, as well as low-traffic streets where their kids can ride bikes. The golf course is incidental, but “it gives us a nice view,” Tom says.

The Venas, who moved to Wynstone from Glenview, are part of a wave of pandemic-era homebuyers who have revitalized the market for golf course homes, which in the before times were often hard to sell. Many of these buyers aren’t golfers, but “they like the aesthetic of a community with so much open space,” says Christine Wilczek, an agent with Realty Executives Elite who has been part of at least five home sales this year in Ruffled Feathers, a golf course community southwest of Chicago in Lemont.

In the pandemic era, Wilczek says, “if they’re going to work from home, they’d rather have a home office with a view.”

At Ruffled Feathers, one of four Chicago-area golf communities where Crain’s dug into home sales records, 15 homes sold in the year ended Oct. 1, compared with five or fewer in each of the years ending on that date in 2019, 2018 and 2017. (We skipped 2020 because the pandemic home sales boom kicked in during the second half of the year, skewing totals.)

The latest year’s sales were more than double any of the three comparison years in White Eagle, west of Chicago in Naperville, in Wynstone, northwest in North Barrington, and in Royal Melbourne, northwest in Long Grove. In each case, the growth in golf home sales was greater than this past boom year’s growth in sales in the community at large.

“It’s been crazy,” says Jill Clark, a Compass agent who’s lived in White Eagle for 28 years and could barely squeeze in time for an interview between showings, inspections and offers on her latest listings there. Before the pandemic boom, she says, homes in White Eagle averaged about 100 days to sell. Now they sell in 13 days.

Clark, who tracks the data assiduously, says the buyer pool has shifted dramatically in the recent boom. It used to be that about one-quarter of the people who bought her listings in White Eagle were moving out from the city. In the past year, it’s been three-quarters.

“Most of them say they aren’t golfers, or maybe they’d like to learn to play golf,” Clark says. More of the appeal is in the “golf course in your view, the illusion of living on acreage,” she says, as well as community swimming, tennis and other recreational facilities.

Some of the buyers are golfers who wouldn’t previously have considered buying in a golf course community, says Connie Antoniou, who lives and sells homes in Wynstone. “Before, they weren’t interested in paying the fees for a private club,” she says, but when the pandemic shut down many public clubs and curtailed nonmembers’ use of private clubs, “they changed their minds.”

Golf course communities were largely a latter-20th-century phenomenon, and with that came the desire for ever-larger houses. The “baby boomer dream houses” seemed to be going out of style, but then the pandemic increased everybody’s need for space to accommodate working, schooling and exercising at home.

In the first months of the pandemic, Carrie and Brandon Sagotz both set up offices in their Lemont home, hers in a bedroom and his in the basement. In October 2020, they bought a house on Sawgrass Street in Ruffled Feathers, and now each has a dedicated in-home office, above ground. They also gained a swimming pool, “lots of mature trees and a feeling of privacy,” Carrie says.

The Sagotzes’ move wasn’t driven by the pandemic specifically; they had already been hunting for a bigger house for their family of four for months when the crisis began. That meant they were primed to pounce when the right house hit the market. They put the five-bedroom house on half an acre under contract 47 days after it went up for sale.

Compare that to the previous time the Sawgrass Drive house sold, in February 2015. At that time, it had been on and off the market three times in six years, at one point waiting 11 months on the market without attracting a buyer.

“Having your space is more important than ever,” Wilczek says, and “that absolutely created a lot more demand for these golf course communities.”

Along with the new branding being announced Monday will come new names, roads, and a message of environmental friendliness. With a tagline of “Next Starts Here,” HRP said the Bellwether District will … END_OF_DOCUMENT_TOKEN_TO_BE_REPLACED

PRITZKER MOVES TO PROTECT THE AS-YET UNVACCINATED: Employees of licensed day care centers in Illinois will now be required to be vaccinated against COVID-19 or get tested for the virus at least once a … END_OF_DOCUMENT_TOKEN_TO_BE_REPLACED