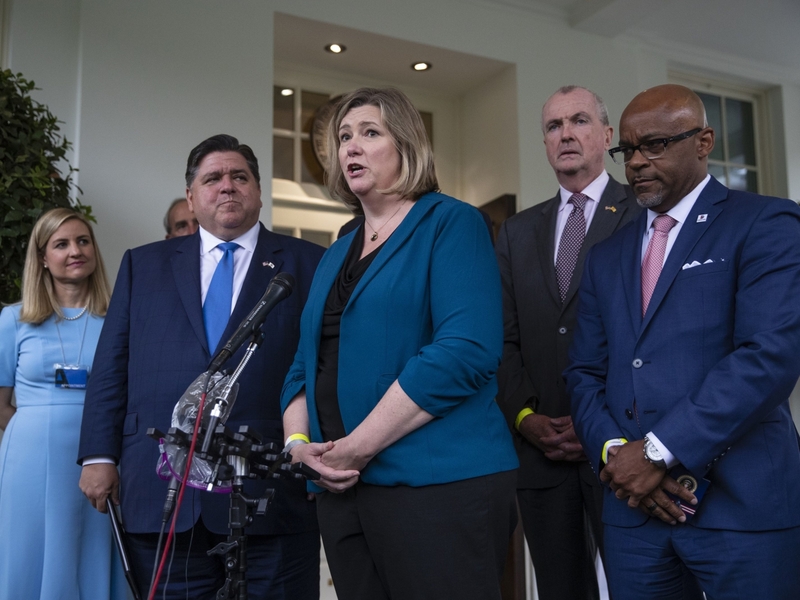 In the mayor’s meeting, which involved about two dozen officials, Pritzker said the conversation focused on traditional infrastructure—roads, bridges, and the like—that is included in a bill now pending in the U.S. Senate.

Pritzker said he specifically asked for money for “logistics buildout,” an apparent reference to highway and railroad improvements designed to secure metropolitan Chicago’s place as a national distribution center. But he also asked for help in filling a huge hole in the state’s unemployment trust fund that is now in hock to the feds for hundreds of millions of dollars of expenses run up during the height of the COVID-19 pandemic.

Pritzker clearly would like the feds to erase some of the debt. But there are other possibilities, he added, including stretching out the period in which the state—more specifically, state employers—will have to pay off the debt.

The Oval Office session lasted about half an hour and finished up with a personal tour of portions of the West Wing and the Rose Garden. Pritzker said it involved him, Biden, and two or three aides. On Pritzker’s ask list there: help with gun control and related anti-violence efforts amid a summer of continuing street violence in portions of the state, particularly Chicago.

Pritzker flew out this morning and was returning from D.C. mid-afternoon. He described himself and the former Vice President and U.S. Senator as “old friends.” Both are Democrats.

Battered by the lingering pandemic, a rise in inflation, supply chain slowdowns and recessionary fears becoming reality, the healthcare industry has faced crisis after crisis over the past several … END_OF_DOCUMENT_TOKEN_TO_BE_REPLACED

“It’s not really livable unless you did a lot of renovation throughout,” Birov said. Built in about 1902, the pillared Classical Revival house was owned by the family of executive outplacement guru … END_OF_DOCUMENT_TOKEN_TO_BE_REPLACED

Get more in-depth, daily coverage of Chicago politics at The Daily Line.CITY HALL — Ald. Sophia King (4th) announced Wednesday she is running for mayor in 2023, becoming the third sitting alderman to … END_OF_DOCUMENT_TOKEN_TO_BE_REPLACED