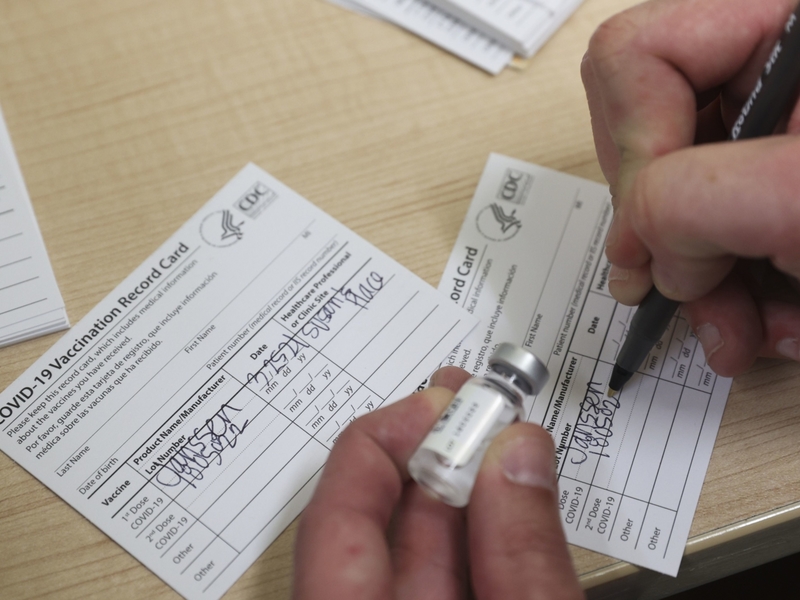 As more people get vaccinated and hospitalizations decline, safely reopening brings the state one step closer to ending the economic disruption caused by the pandemic, which has infected 1.3 million Illinoisans and killed 22,000.

The city of Chicago is “on course” to move into the bridge phase of its own reopening plan, in conjunction with the state, on May 14, according to an emailed statement from Lightfoot’s office.

“This next step in our cautious and responsible reopening plan will allow for an extensive expansion of capacity limits across industries that broadly align with state regulations,” the statement says, noting that more information will be shared in the coming days to help businesses prepare for the new regulations.

“This pandemic is not over, but if we’re going to truly end it, we have to make sure we don’t see another surge in the virus, and the best way to do that is for everyone to get vaccinated,” the governor said today. “We have the vaccine, all we need is the doctors,” he added, noting that more than 1,000 doctors’ offices have signed up to offer the shots as of this afternoon.

There are risks associated with reopening both too fast and too slow, experts say. States that lift mitigations much later than others risk losing public trust, which will be crucial to combat any future virus surge or new variants that might be impervious to existing vaccines. But reopening too quickly—particularly when other states and countries are dealing with outbreaks—could result in a surge, leading states to backpedal and sending shockwaves through the economy.

“We’re doing better, but this doesn’t mean COVID will go away in the U.S. We need to learn to live and mitigate. It’s not sustainable to keep economies closed,” says Alessandro Rebucci, associate professor at John’s Hopkin’s Carey School of Business.

Under the bridge phase of Illinois’ reopening plan, several industries—including gyms and retailers—will bump up to 60 percent capacity, from 50 percent, while restaurants outside of Chicago can continue to serve parties of 10 or fewer spaced at least six feet apart.

Illinois has already met one key measurement toward a full reopening: To date, nearly 56 percent of Illinoisans 16 and older have been vaccinated. When other key COVID-19 metrics—like hospital admissions—are stable or declining for a 28-day period, the state intends to lift all capacity limits and resume large gatherings with new safety protocols.

In Michigan, rather than identifying a target date, the state’s reopening is based on hitting vaccine milestones. The plan, called “MI Vacc to Normal,” increases capacity at stadiums, conference centers and other facilities each time the percentage of people 16 and older increases 5 percentage points, starting at 55 percent and ending with a full reopening at 70 percent. According to media reports, the Protect Michigan Commission says the state could reopen as soon as July 4.

Unlike New York’s reopening plan, under which some events will require proof of vaccination or a negative COVID test to negate the requirement of maintaining social distancing, Illinois’ doesn’t factor in a statewide vaccine passport program. The city of Chicago has teased a “Vax Pass” program intended to encourage residents to get a shot by offering preferred seating at certain events.

Meanwhile, Illinois is reopening slower than some other states: Georgia eliminated social distancing and masking requirements on May 1 and Pennsylvania aims to lift all restrictions by Memorial Day.

But easing restrictions is just one factor driving states’ economic recovery. In fact, research shows that economic disruption primarily is driven by consumer fear of the illness, not governmental actions, though the two are inextricably linked.

“States that didn’t put in stay-at-home orders (early in the pandemic) still saw pretty drastic declines in economic activity because people were scared of the virus,” says David Merriman, a senior  scholar at the University of Illinois’ Institute of Government & Public Affairs. “People are going to be reluctant until they’re sure the disease is under control. On the flip side, if people don’t perceive the disease as being dangerous, even with the restrictions, they’re going to be out doing stuff.”

That has been the case for gyms, says Steven Schwartz, chairman of the Illinois Fitness Alliance and CEO of Midtown Athletic Clubs. “People don’t like to work out in a mask,” Schwartz says. “It’s a constant reminder that maybe you should stay away from everybody.”

But experts say there’s a clear case for a conservative, evidence-based reopening target, since tightening restrictions after businesses have scaled up would be detrimental to economic recovery.

“It would be devastating if we had to scale back again,” says Sam Toia, president and CEO of the Illinois Restaurant Association. “A lot of people are very concerned about coming back to work and going back on unemployment. That would be a gut punch. However, with the vaccines out there—we have enough vaccines now—wearing our masks, doing social distancing, I think we’re seeing light at the end of the tunnel.”

In other reopening news, Pritzker and Lightfoot on May 4 announced the return of the Auto Show, from July 15 to 19 at McCormick Place, marking the first large convention since the pandemic began—and spurring hope for a revival of big events.

“I don’t think we’re ever going to get back 2019 or 2018 sales at restaurants or hotels until we have conventions back because our city—especially the central business district—is built on conventions, tourism, culinary tourism,” Toia says. “It’s all about guests in beds and diners in seats.”

As for people who work in the city of Chicago, it’s unclear whether easing COVID restrictions will precipitate a widespread return to downtown offices among those who have the ability to work remotely. Yesterday BMO Harris Bank, Chicago’s second-largest bank, announced it will ask its business bankers and associated staff to return to the office beginning next month. Along with plans from Citadel and Chase, that would put well over 10,000 workers downtown this summer, at least for portions of the week.

CHICAGO (CBS) — We first told you about Sally’s Nuts one year ago; a beloved mother-daughter business that took off during the pandemic.It turns out they’re doing so well, they’re finally​ having … END_OF_DOCUMENT_TOKEN_TO_BE_REPLACED

“In this environment, having certainty of who your tenants are and the cash flow of those tenants is attractive. We believe in Restoration Hardware as a tenant,” said Alexi Panagiotakopoulos, … END_OF_DOCUMENT_TOKEN_TO_BE_REPLACED