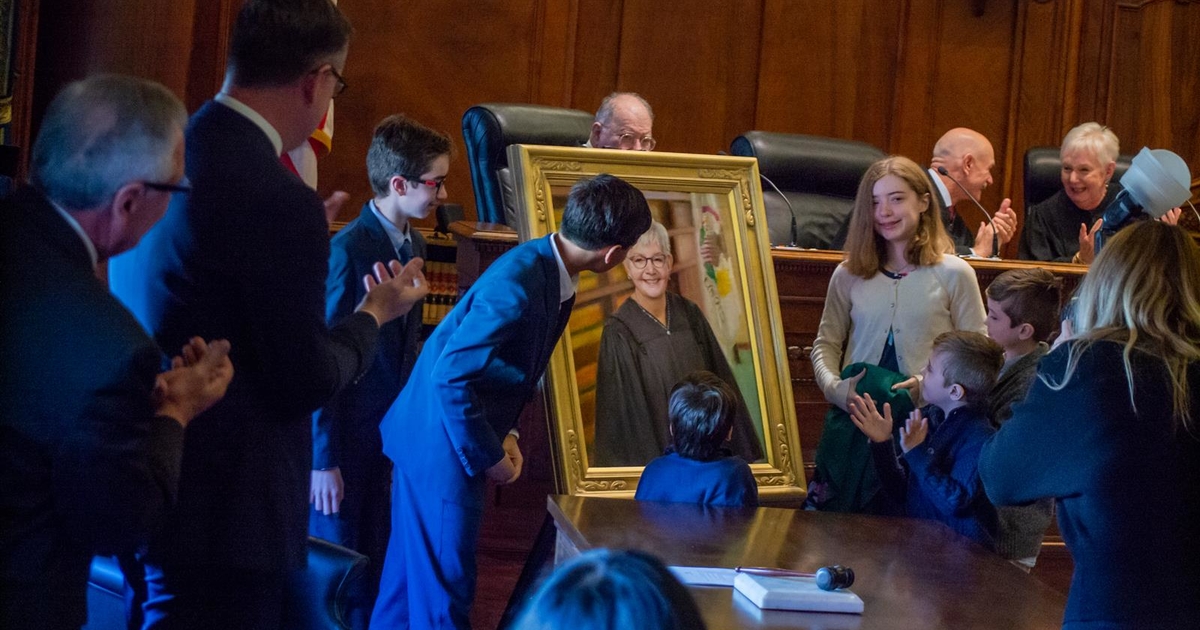 Democrats will also take a 5-2 majority on the court next month, an expansion of partisan power from the current 4-3 split after Democrats won two judicial races in the 2nd and 3rd districts in last week’s elections.

But the bipartisan message Monday during a swearing-in ceremony from the Springfield Supreme Court building was a unifying one: The rule of law, not partisan politics, governs how the justices approach their work on the bench.

“We are in a time of crisis,” Theis said in an address to about 60-70 individuals in the Supreme Court chamber. “We know that trust and confidence in institutions generally have been falling. We know that today, polls show that the United States Supreme Court is held in its lowest approval rating since polling began.

“Here in Illinois, we’ve just come through a bruising election. …A time where, over and over, the people of the state of Illinois were told that the judiciary is just another place of partisan politics, that what we do is gamesmanship. I will tell you that is not my experience. That is not the truth.”

In that election, the television airwaves were filled with messages about Republicans’ real or perceived stances on abortion and Democrats’ alleged involvement in partywide corruption.

Retired Justice Rita Garman, a Republican, was one of three speakers at Theis’ swearing-in ceremony, remarking on the long friendship the two shared during their time on the court. Garman had served on the high court since 2001 until her July retirement, while Theis has served since 2010.

Garman said she always appreciated Theis’ level of research in her opinions and analysis. And she became friends with her fellow justice at the Supreme Court’s living quarters in Springfield where the justices stay when in town for deliberations.

“She was always thoughtful and willing to offer input and suggestions,” Garman said. “I can assure you she is committed to the rule of law.”

Garman was replaced by Lisa Holder White, the first Black woman to serve on the state Supreme Court.

Justice Anne M. Burke, who immediately preceded Theis as chief justice, presided over the new chief’s swearing in. Burke herself will retire at the end of the month, and her appointed successor is Appellate Justice Joy V. Cunningham, who will become the second Black woman seated on the high court.

“In referring to our court, Justice Theis was quoted in 2012, saying, ‘I am proud of the nonpartisan sense of our court,’” Burke said in leading off the ceremony. “That phrase I believe, is the most important way to express how all of us on the court feel about the responsibility we share. The important issues which come before us are decided on the law and without regard to party, person or prejudice.”

Theis was officially sworn in Oct. 26, but the ceremony took place Monday as the justices returned to Springfield for their regular term.

She said her judicial philosophy stems from giving every argument before the court fair consideration.

“The main, most important indicator of whether people will accept what happens to them in court is if they believed they’ve been treated fairly,” she said. “The perception of fairness is what holds together our communities, our court system, the rule of law, and our democracy.”

He echoed his mother’s belief in giving everyone a “fair shake” and shared anecdotes about her career’s progression, starting with a July 1, 1983, appearance by the now chief justice on the local news in her judicial robes.

“The actual news story was about a judge that was in a wheelchair,” he said. “But for two brief seconds in this clip, my mom walks in from the right and stands with the judges who were there. I must have watched that video 100 times growing up when I was a kid until the tape started to wear away.”

Another memory he shared was when he found out his mom had been diagnosed with cancer. He said he was young but understood the possibility that she wouldn’t survive.

“And the second thing that even I knew at the time was even if she did survive and make it through the treatment process, her legal career would likely be derailed,” he said. “I was wrong. She beat cancer twice and her career’s turned out just fine.”

Theis is from the court’s 1st District, which encompasses Cook County and elects three of the court’s seven justices. She was chosen for the post through the court’s standard process of naming a chief justice, which gives the position to the most tenured justice who has not yet held it.

She was born in 1949 in Chicago, graduated from Loyola University in 1971 and earned her law degree from the University of San Francisco School of Law in 1974. She was retained for another 10-year term during last week’s election.

Her duties as chief justice will include serving as the court’s chief administrative officer, which oversees more than 900 judges in the statewide judicial system. The chief justice also selects Supreme Court agenda items, supervises all Supreme Court committee appointments, chairs the executive committee of the Illinois Judicial Conference and presents the court’s budget request to lawmakers.

Capitol News Illinois is a nonprofit, nonpartisan news service covering state government. It is distributed to more than 400 newspapers statewide, as well as hundreds of radio and TV stations. It is funded primarily by the Illinois Press Foundation and the Robert R. McCormick Foundation.

CHICAGO — A Chicago man faces criminal charges in the riot at the US Capitol nearly two years ago.  Federal authorities say James McNamara was identified as the suspect seen repeatedly ramming the … END_OF_DOCUMENT_TOKEN_TO_BE_REPLACED

Other provisions would loosen the definition of an EV worker and appear to be aimed at existing automakers in Illinois, especially Stellantis and Ford. They have huge conventional auto assembly plants … END_OF_DOCUMENT_TOKEN_TO_BE_REPLACED