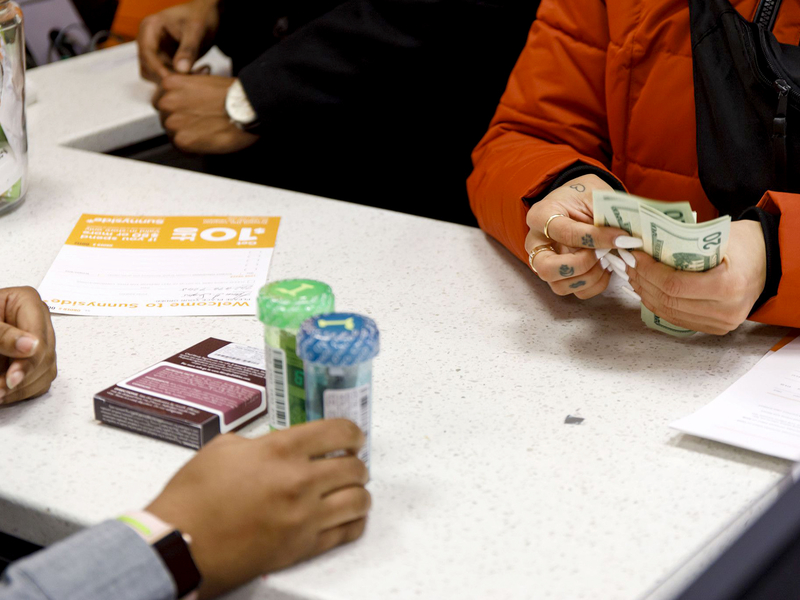 It’s partly a seasonal slowdown along with an industrywide hangover from a pandemic-inspired spike in recreational marijuana sales. But the slump also reflects the state’s delay in issuing licenses for new pot shops.

Illinois is on track to double sales to about $1.4 billion and take in about $428 million in sales taxes in 2021, just its second year of legal recreational marijuana sales. But the growth is about 10% less than it could have been, estimates Beau Whitney, who tracks the industry at Whitney Economics in Portland, Ore.

An extended period of flat or declining sales would threaten the tax revenue, jobs and other economic benefits that Illinois officials hoped for when they legalized pot.

“It means you’re pushing out that job growth because you’re not opening more stores, and you’re not going to see as much tax revenue,” Whitney says. “Once stores get open, there will be an increase in jobs, tax revenue and sales.”

Illinois has 110 marijuana stores, up from just 55 when recreational sales began in January 2020. An additional 185 store licenses are in limbo, pending legal challenges. There’s no telling when the lawsuits will be resolved. The CEO of Planet 13, a Las Vegas-based cannabis retailer that’s in line for a license with a local partner, told analysts recently he expects to receive it by mid-2022.

Illinois unexpectedly plunged into legal marijuana in 2019, with promises of creating jobs, generating tax revenue and righting social wrongs. But no one knew quite what to expect from an industry that’s been legal for less than a decade. Sales have lurched along in fits and starts, first as the existing medical-cannabis growers boosted production, then opened additional stores. Now seasonal factors, such as Chicago’s tourism patterns, are in the mix.

State regulators and cannabis companies say they’re not worried about the 2% drop in statewide sales between October and November to $120.7 million, the lowest since June.

“Like any market, there will be fluctuations in consumer activity,” says a spokeswoman for Gov. J.B. Pritzker.

Jason Erkes, a spokesman for Cresco Labs, one of the largest marijuana companies in Illinois, notes that “November is typically a slower month with only four weekends and retail being closed on Thanksgiving—we see that all across the country.”

He adds, “With the number of operational stores in Illinois frozen right now, I think we’ll see consistency month to month but not a big bump until more doors get opened.”

Analysts say the industry is coming down from a high caused by COVID, when widespread lockdowns kept people at home where they could use cannabis more freely. During lockdowns that forced some retailers to close, marijuana shops were allowed to stay open as “essential businesses” in Illinois and most other states where weed is legal.

“We saw cannabis markets globally boom in Canada and the U.S.,” says Jamie Schau, who heads up research at Chicago-based Brightfield Group, which tracks the industry. “The foot is coming off the gas a little bit in some of these markets. They’re still growing, but it’s not at the same rate. People were staying inside and using it more early in the pandemic.”

In Colorado, the most mature weed market in the U.S., year-over-year growth in weed sales doubled to about 30% starting last May but has been negative since June, according to data compiled by the state.

With the gradual return of some workers to offices, Whitney says “demand is returning to a normal growth pattern.”

Normal growth in the cannabis industry is seasonal. Weather and tourism affect weed use. Smokable marijuana is still the most widely consumed product, so usage takes a hit when cold weather forces people indoors. That’s one reason Illinois sales peaked in July, jumping 11% in a month when Independence Day fell on a weekend and Lollapalooza was in Grant Park.

“It’s a fairly consistent pattern: You tend to see highest revenue in July, August and September, then it tapers off,” says John Kagia, chief knowledge officer at New Frontier Data, an industry research firm in Washington, D.C. “It’s the end of tourism season and people are heading back indoors. The cannabis industry is cyclical. There are a lot of factors that drive it.”

Illinois could catch a tailwind next year, if the traditional seasonal trends coincide with opening of new stores, which are critical to the industry’s long-term growth.

“I would expect coming out of the colder months, we’ll see an uptick, and I’m fully expecting an uptick as more stores open and open in different regions of the state,” says Schau, who predicts the Illinois market will roughly double again to about $3 billion in annual sales by 2026. “A lot of the initial growth (in cannabis) comes in transferring people from the legacy illicit market and not new consumers. To get new consumers, you need more stores.”

Here is a new way you can watch local news, 24 hours a day, seven days a week – for free!  NBC 5 has launched NBC Chicago News on Peacock. Here, you will see around-the-clock local news coverage. … END_OF_DOCUMENT_TOKEN_TO_BE_REPLACED

Proper Rate, the joint venture by Guaranteed Rate and @properties, has named Rich Honquest as a new vice president of mortgage lending. In the position, Honquest will be originating loans in the … END_OF_DOCUMENT_TOKEN_TO_BE_REPLACED

Tuition for out-of-state and international freshmen will increase by 2.5% in Urbana-Champaign, 1.8% in Chicago and 1.5% in Springfield. Tuition at U of I was previously frozen from 2015-2019 and in … END_OF_DOCUMENT_TOKEN_TO_BE_REPLACED