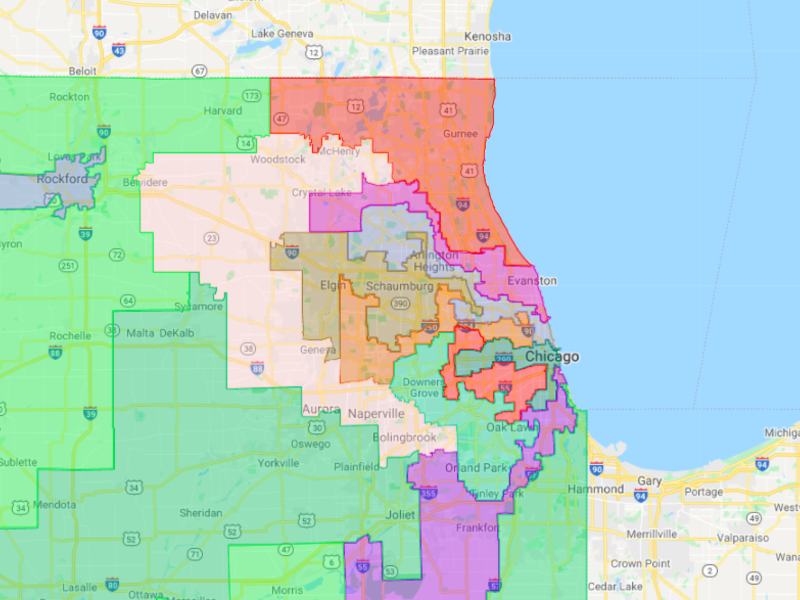 If you already know where I’m headed with this—a call to reform political gerrymandering—then count yourself among the remap cognoscenti. After all, gerrymandering isn’t some abstract concern: It has real-world consequences, in the form of who gets elected and who does not. Yet millions upon millions of people refuse to care a whit about it.

Former Gov. Jim Edgar—who served in an era when majorities in the Illinois Legislature toggled between Democratic and Republican—described why politicians play for keeps when it comes to maps.

“That’s the bottom line in Springfield: the map. This idea that Republicans are going to be fair or Democrats are going to be fair, that’s just not true. Not on this issue,” Edgar told host Justin Kaufmann for the Better Government Association podcast “The Madigan Rule.” “They might be fair on everything else. But not on a map.”

Events of the last few months bear that out. Democrats in Springfield faced a June 30 deadline for state legislative maps—or risk losing control of the process to Republicans in a coin flip. The map they rushed to approve was built from population estimates, not the actual census headcount. And when the census data did arrive, it showed large population variances among districts that made the maps illegal.

Democrats nimbly fixed the problem, then delivered state legislative maps that Gov. J.B. Pritzker promptly signed—even though he campaigned in favor of independent map commissions and promised to veto a map drawn by politicians.

By the time the Legislature’s redistricting committees began drawing congressional maps this summer, the public had gotten the message: Their input was not wanted. People responded by not participating in the charade. At one hearing, only a single person testified.

The end result, approved in late October by the Legislature, is predictable if disappointing.

Gerrymandering persists. In the southwest part of the state, the 13th District takes the shape of a skinny sickle with its handle in East St. Louis and running northerly through Springfield and Champaign. The 17th District, arcing from Peoria past Rockford, runs 330 miles long.

Jim Lewis, a senior research specialist at the University of Illinois at Chicago’s Great Cities Institute, said Illinois’ strange-shaped districts are the expected outcome of a system designed to reward partisan gerrymandering.

When parties do it, they gain seats. And there is virtually no disincentive to cause them to stop. Besides, the Supreme Court has sanctioned all this, ruling in 2019 that mapmaking is a political process “beyond the reach of the federal courts.”

Lewis said the result is utterly predictable: runaway gerrymandering. The distorted contortions in Illinois’ new map won’t even be among the worst 10 cases once all 50 states have finished their maps, he said.

“Everybody does it. That’s just the way mapmaking works. Of course, you’re trying for partisan advantage, and the Supreme Court ceded this a couple of years ago,” Lewis said.

The map approved by the Illinois Legislature’s Democratic supermajorities in both houses last month sought to lock in 14 congressional seats for Democrats, a one-seat increase for the party, and to limit Republicans to only three seats, reducing their count in Washington by two.

Independent commissions can be an antidote to partisan gerrymandering. Twenty-one states have them. Some fair-maps advocates propose a national law requiring commissions in every state. Illinois has tried and failed to establish commissions, so the state right now is stuck.

The next round of electoral mapmaking will start with data from the 2030 census. As big a challenge as it would be to bring about national legislation, there’s almost a decade to get it done. And adoption of commissions in nearly half the states shows support is sizable. A large majority of Illinois residents support the idea. It’s the politicians and courts that have prevented it from happening.

What’s lacking most is the will, and the resources, to carry on the fight. That won’t come from politicians. It needs to come from people who demand better—and are committed to make fair maps the objective of a national movement.

CHICAGO (CBS) – It’s a special Thanksgiving morning in the loop. After two years, a Chicago tradition returns. The Chicago Thanksgiving Parade returns Thursday and will feature the traditional, large … END_OF_DOCUMENT_TOKEN_TO_BE_REPLACED