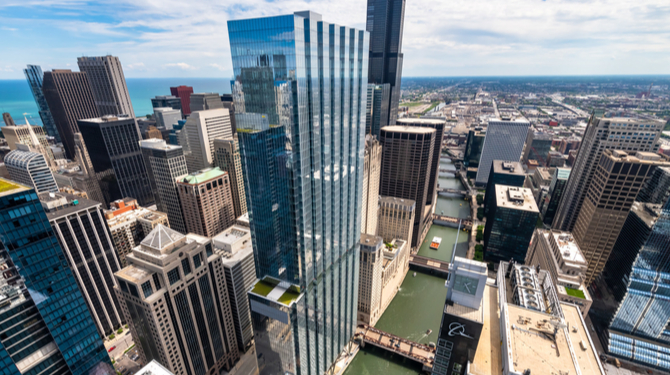 Perkins Coie has relocated its Chicago office to the newly-constructed Bank of America tower at 110 North Wacker Drive, two years after the Seattle firm signed the 104,000 square foot lease.

The move takes Perkins Coie’s 60 partners, 61 lawyers and more than 100 other staff members in the Windy City to the riverfront where it will occupy three of the skyscraper’s 55 storeys just under a mile away from its current base at 131 South Dearborn Street, where the firm has been a tenant since it opened in Chicago in 2002.

The new office has been designed with collaboration and employee wellness in mind and covers slightly less square footage than the firm’s previous Chicago base, which was 118,000 square feet.

Key features of the space include ‘state-of-the-art’ technology, collaborative meeting spaces, a community lounge and a conference and event centre. Lawyers and staff will also have access to a number of dedicated private spaces, including for wellness, meditation and mothers, in a move the firm said underlines its commitment to employee wellbeing.

Richard Sevcik, Perkins Coie’s Chicago office managing partner, said the new office will allow the firm to better serve its roster of clients across the technology, finance, fintech and healthcare sectors, among others.

He added the move “also highlights a significant new investment in a major business centre that is a priority market in Perkins Coie’s long-term national growth strategy.”

The firm has focused on steadily building its platform in Chicago since it first entered the city 20 years ago, going from just three attorneys to ranking among the largest law firms in the Windy City this year according to data from Crain’s Chicago Business. Its Chicago base is currently its largest office outside its Seattle headquarters, which houses 159 partners amid a wider team of 463 lawyers and staff.

Perkins Coie was one of a number of US law firms to push back their office return dates as a result of Covid-19’s resurgence over the summer, meaning lawyers won’t necessarily be populating the new office space until 4 January. The firm, which is currently using a hybrid model that combines remote and in-person work, said pandemic-related factors were ‘absorbed’ into the new space’s design, but ultimately did not change its original plans from when the deal was first announced in 2019 as part of its national strategy.

Kirkland & Ellis, the world’s largest law firm by revenue, also unveiled plans in August to move its 700 lawyers and staff in its Chicago headquarters from 300 N. LaSalle to a 600,00 square-foot space in a new tower located nearby at 333 W Wolf Point Plaza. The deal served as a major driver in the rebounding of Chicago’s law firm leasing activity in the third quarter of 2021.

And in May, Silicon Valley firm Cooley added nine partners from a number of firms including Latham & Watkins, Winston & Strawn and DLA Piper to open an office in Chicago to serve its Midwest clients.

CHICAGO (CBS) – It’s a special Thanksgiving morning in the loop. After two years, a Chicago tradition returns. The Chicago Thanksgiving Parade returns Thursday and will feature the traditional, large … END_OF_DOCUMENT_TOKEN_TO_BE_REPLACED