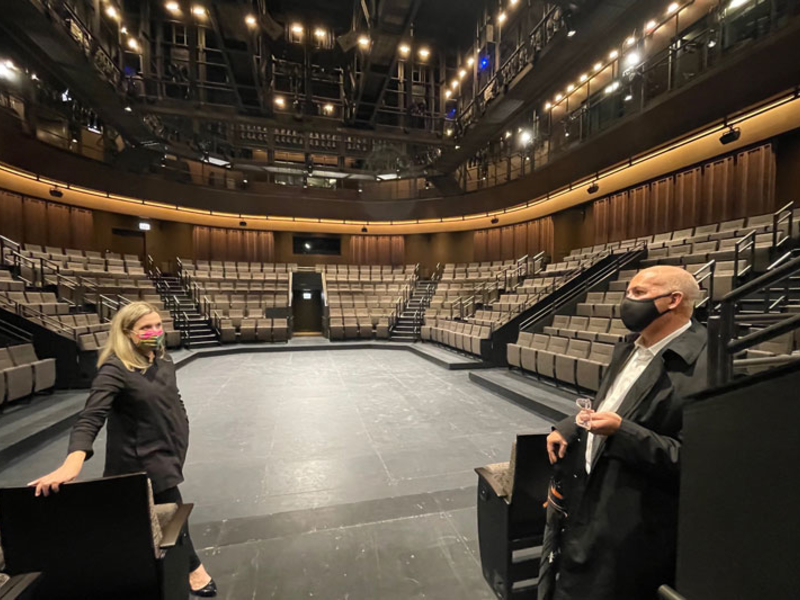 Flanagan and Gill gave Crain’s a tour of the new building and what amounts to an entirely new company campus ahead of the formal unveiling Nov. 2.

Steppenwolf had been planning the expansion for 14 years, going back to the tenure of Martha Lavey, the theater’s longtime artistic director who died in 2017. Flanagan said Gill went through a dozen designs over those years.

Gill credited Lavey’s successor, Anna Shapiro, and Flanagan’s predecessor, David Schmitz, with advancing the project through the three-phase, $73 million Building on Excellence campaign. The first phase, creating the Front Bar and smaller 1700 Theater out of a former Ethan Allen furniture building to the north, was completed a few years ago. Now this new building, on what was a parking lot to the south, is ready for action, along with the renovation of the main theater building at 1650 N. Halsted St.

Gill recalled asking Shapiro “where you think theater occurs.” The reply: “Theater occurs, I think, between the audience and the actor in this ethereal space, and it’s a collision. It can be dangerous sometimes, it can be fun sometimes, but it’s always safe and it’s dynamic.”

A shotgun corridor runs along the Halsted side, connecting the Front Bar, the main stage and the new in-the-round theater. Formally known as the Ensemble Theater in Honor of Helen Zell (like the Lefkofskys, a prominent donor), the 400-seat performance space has 100 more seats than the old upstairs theater in the main building, which has been converted to a rehearsal space.

The theater itself is impressive. “It’s a very adaptable house,” Gill said, “and very intimate. It has a personality, just like Steppenwolf does: warm but rugged.”

Tracy Letts’ “Bug” resumes its pandemic-paused run on the main stage in November. An adaptation of Eve Ewing’s “1919” launches the Ensemble Theater early next year, followed by Yasen Peyankov’s reworking of Chekhov’s “Seagull.”

The new building also includes the Loft, an upstairs area devoted to classrooms that will allow the company to bring students in house and expand its education program from 20,000 to 30,000 students a year, along with offices, a script library and a costume shop, moved over after Steppenwolf sold its old office building at Halsted and North Avenue.

“Who knew you could take our old fortress of a building, an Ethan Allen furniture store and a parking lot and make this?” Flanagan said.

CHICAGO — The City Council on Monday delayed a vote on Mayor Lightfoot’s curfew change — but a group of young residents are urging members to vote no. The young adults are part of the racial … END_OF_DOCUMENT_TOKEN_TO_BE_REPLACED

The fire at the former Pheasant Run Resort, 4051 E. Main St., broke out Saturday afternoon, sending huge plumes of smoke into the sky surrounding the closed resort and drawing dozens of onlookers who … END_OF_DOCUMENT_TOKEN_TO_BE_REPLACED

As the 2022 political season gets into full swing, one of the most intriguing candidates for elected office is Herschel Walker. The star running back with the University of Georgia and Dallas Cowboys … END_OF_DOCUMENT_TOKEN_TO_BE_REPLACED