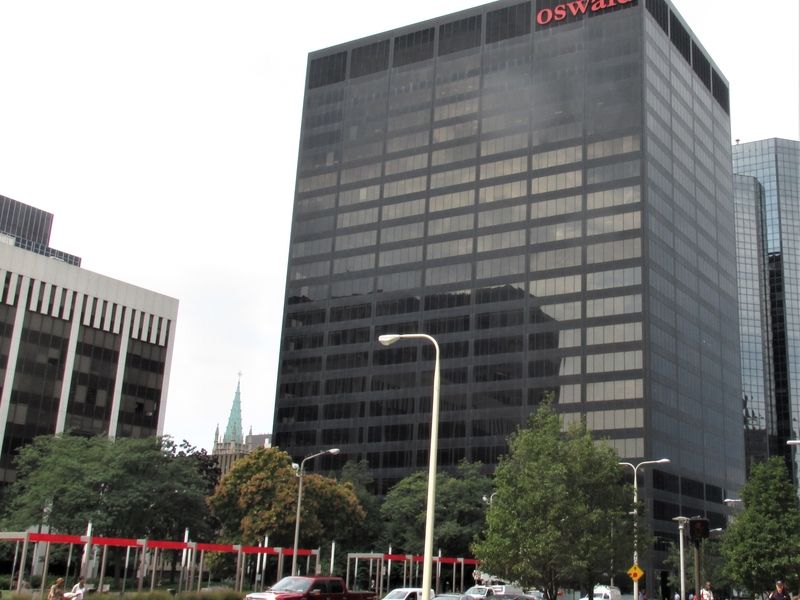 The 21-story Oswald Centre in downtown Cleveland has gone into foreclosure, a staggering turn of events for a Chicago-area real estate firm that had a long, successful run here, as well as a strong track record in the Windy City.

A run of bad luck at the 1972-vintage building at 1100 Superior Ave. that American Landmark Properties of Skokie, Illinois, has owned since 2007 may account for most of the property’s woes, but it also suffers from the long-term challenges of the office sector and more recent pandemic-era trends with downsizing tenants in the work-from-home era.

The glass-skinned steel structure, owned by an affiliate of American Landmark Properties through 1100 Superior of Cleveland LLC, has 31% vacancy in its 576,000-square-feet of rentable space. However, insiders believe it actually has more space than that available as tenants turn back space to landlords because they can get by with less office space as the lingering pandemic delays the return to the office.

According to data from the JLL Inc. real estate brokerage, the structure is worse than downtown as a whole, which has a vacancy rate of 26%. However, it is better off than other Class B, older buildings, which have a vacancy rate of 33%, according to JLL’s annual Skyline Report issued in October.

The collateralized mortgage loan on the structure, referred to as COMMM-2014-UBS3, went into default when 1100 Superior quit paying monthly payments on the $48.25 million remaining principal on a $52.5 million loan taken out against the property in May 2014, according to a court filing. That was technically a refinance of the property — typically a time when companies take money out of a project they want to keep with a new, larger loan — after buying it for $47 million in 2007.

The foreclosure was filed Nov. 22 in Cuyahoga County Court of Common Pleas by US Bank as the trustee for the loan, which already had been placed in special servicing with LNR Special Servicing of Miami Beach, Florida.

Notes from the special servicer relayed to the investment community stated that the building was more than 120 days delinquent on monthly payments, and the owner quit paying the mortgage because it wanted to get a loan modification. Such modifications typically are given by insurance and bank lenders, but not by special servicers who seek to recoup capital for bond investors.

“Borrower advised they were unable to fund the capital costs associated with the leases due to high roll over during the remaining term of the loan,” the report stated, in a reference to rampant tenant downsizings expected in the post-pandemic era. Oswald Centre in the spring lost a full-floor tenant from its top floor when labor and employment law firm Little Mendelson moved to Key Center and substantially cut the size of its office.

The DBRS report noted that the building suffered $2.8 million in damage in 2017 when a water line broke and only $500,000 was received from insurance, putting the building in a bind for additional funds.

Here is a new way you can watch local news, 24 hours a day, seven days a week – for free!  NBC 5 has launched NBC Chicago News on Peacock. Here, you will see around-the-clock local news coverage. … END_OF_DOCUMENT_TOKEN_TO_BE_REPLACED

Proper Rate, the joint venture by Guaranteed Rate and @properties, has named Rich Honquest as a new vice president of mortgage lending. In the position, Honquest will be originating loans in the … END_OF_DOCUMENT_TOKEN_TO_BE_REPLACED

Tuition for out-of-state and international freshmen will increase by 2.5% in Urbana-Champaign, 1.8% in Chicago and 1.5% in Springfield. Tuition at U of I was previously frozen from 2015-2019 and in … END_OF_DOCUMENT_TOKEN_TO_BE_REPLACED