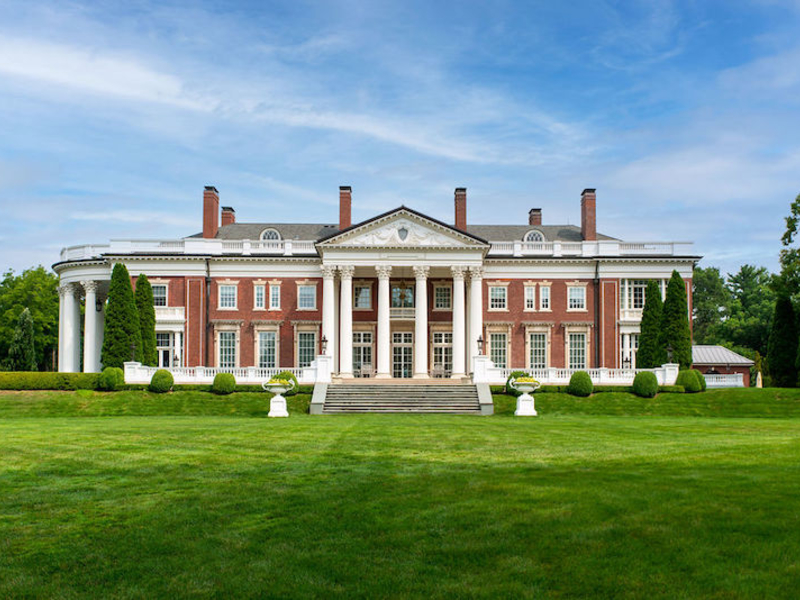 Harris died in 1916, and in 1920 the family sold the estate to Jean and Walden Shaw, who changed the property’s name to The Stenning. Walden Shaw and John Hertz ran a livery company in Chicago that became Yellow Cab. In the 1930s, the Shaws’ daughter, Dorothy, and her husband, Daniel Peterkin, the head of Morton Salt, took over ownership.

The Peterkin family sold the property to Driehaus in 1998, after nearly 80 years in one family’s hands.

Most published reports indicate Driehaus himself oversaw many of the details of restoration of the white-pillared mansion and grounds. He was, as many Chicagoans recall, a dedicated preservationist, with his offices in the Ransom Cable mansion, built in 1886 on Erie Street, and a museum of decorative arts named for him across the street in the Samuel and Matilda Nickerson mansion, built in 1883. A few months after Driehaus died, the Driehaus Museum bought its next door neighbor, the Murphy Auditorium, built in 1926.

Driehaus underwrote the Landmarks Illinois annual preservation awards and a similar program at the National Trust for Historic Preservation, as well as an architecture prize at Notre Dame for work in traditional or classical styles.

In Lake Geneva, Driehaus funded development of a lakefront plaza with a statue called The Angel of Waters.

Chicago Shooting News Live: A gunman on a rooftop opened fire on an Independence Day parade in suburban Chicago on Monday, killing at least six people, wounding at least 30 and sending hundreds of … END_OF_DOCUMENT_TOKEN_TO_BE_REPLACED

The real estate industry is beyond crowded — it seems like agents are popping up everywhere and taking aim at your clients. So, how can you cut through all that noise to stand out? You’ve got to … END_OF_DOCUMENT_TOKEN_TO_BE_REPLACED

Chicago Mayor Lori Lightfoot confirmed to the New York Times that the Chicago Police Department is assisting in the response and investigation.  “Law enforcement is working hard to bring the shooter … END_OF_DOCUMENT_TOKEN_TO_BE_REPLACED