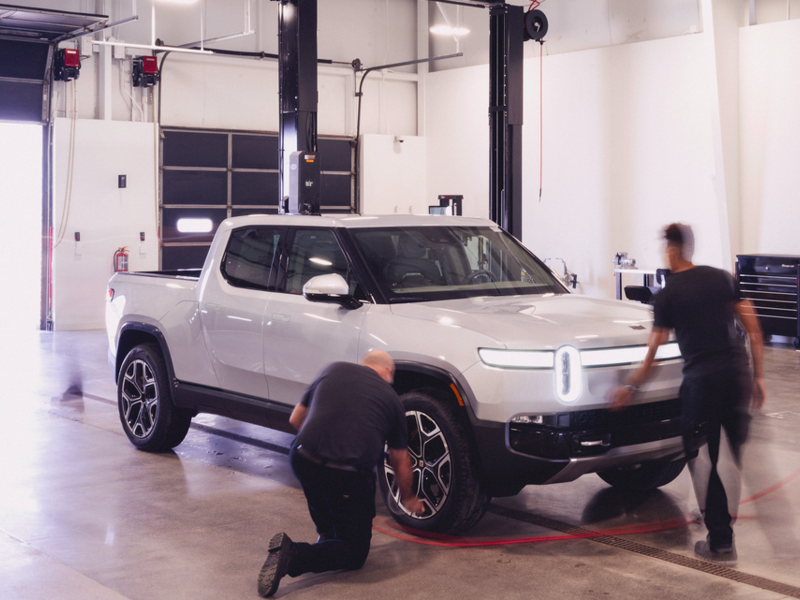 The deal comes as Rivian—which raised nearly $11 billion last month through its initial public offering, the largest IPO for an American company since Facebook—ramps up production of its electric vehicles and expands its network of service centers nationwide. The company is chasing industry pioneer and leader Tesla, which has a showroom and service center just north of the Fulton Market District among other locations in the Chicago area. Another competitor that went public earlier this year, Lucid Motors, is opening a service center on Goose Island.

Rivian had a deal lined up in February to lease a building on Randolph Street in Fulton Market for a showroom, but the company never finalized the lease. Now it is instead setting up shop further west on a site next to where the city of Chicago is about to begin building a new CTA Green Line station at Damen and Lake.

The Rivian spokeswoman did not provide details on when the new service center will open or how many jobs it will create. While Rivian aims to handle most vehicle maintenance at owners’ homes from mobile service vans, the company’s service centers handle more serious repair work, according to the spokeswoman. Rivian has opened or is building out locations this year in New York, Washington and California, among other states.

Rivian has already invested heavily in Illinois, spending more than $1 billion to convert a shuttered factory in downstate Normal into an assembly plant that had about 700 workers as of early this year. Rivian is expanding the size of that plant to more than 4 million square feet and plans to hire as many as 1,000 more employees in Normal by the end of June, the company said this month.

Rivian is leasing the Near West Side site from Realterm Logistics, an Annapolis, Md.-based industrial real estate investor that bought the property from Standard Equipment for $14.8 million in February 2020.

A spokeswoman for Realterm did not provide a comment.

Shares of Rivian began trading today at just more than $96 apiece, up from the Nov. 10 IPO price of $78 per share. The company’s stock price briefly surged past $170 per share in the days after the IPO, then plummeted just as quickly and has been trending downward since.

Here is a new way you can watch local news, 24 hours a day, seven days a week – for free!  NBC 5 has launched NBC Chicago News on Peacock. Here, you will see around-the-clock local news coverage. … END_OF_DOCUMENT_TOKEN_TO_BE_REPLACED

Proper Rate, the joint venture by Guaranteed Rate and @properties, has named Rich Honquest as a new vice president of mortgage lending. In the position, Honquest will be originating loans in the … END_OF_DOCUMENT_TOKEN_TO_BE_REPLACED

Tuition for out-of-state and international freshmen will increase by 2.5% in Urbana-Champaign, 1.8% in Chicago and 1.5% in Springfield. Tuition at U of I was previously frozen from 2015-2019 and in … END_OF_DOCUMENT_TOKEN_TO_BE_REPLACED