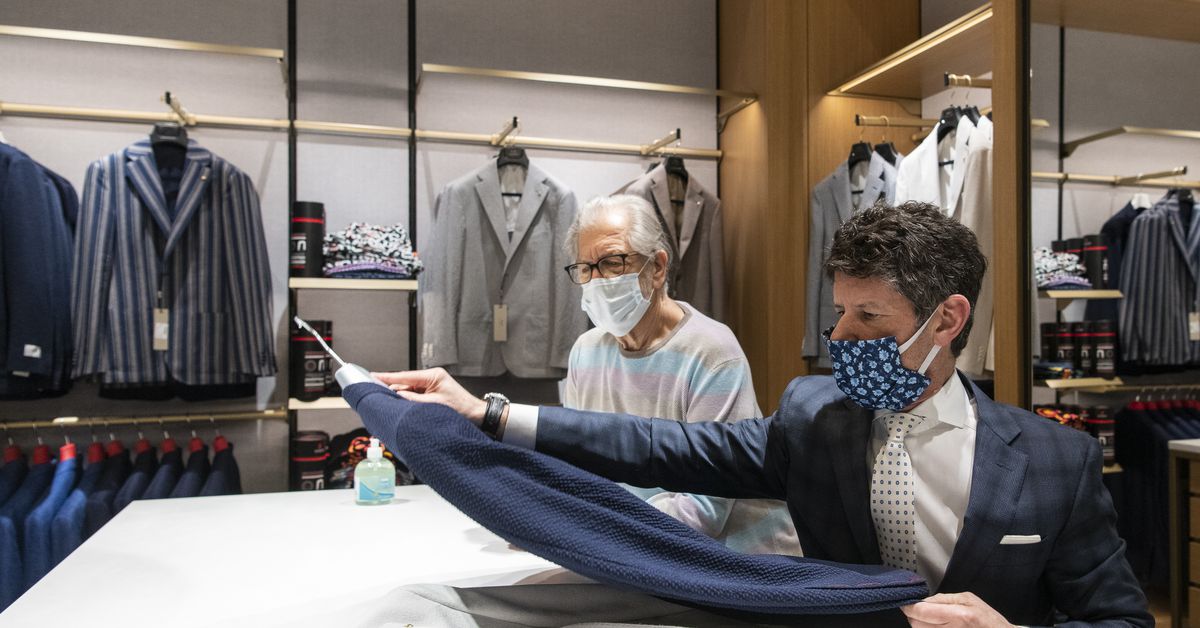 Over the past year, I’ve worn a coat and tie exactly once. The incoming director general of the Taiwanese economic and cultural office in Chicago wanted to get acquainted over a Zoom call. I knew he’d be wearing a coat and tie, and didn’t want to be disrespectful: they’ve got enough of that coming from communist China already.

It was, as they say in diplomatic circles, a frank and productive exchange of ideas.

A few minutes before we spoke, I stood before the mirror in the bedroom, fingers fluttering at the necktie — blue, not red, for obvious reasons. I wondered if I’d remember how to tie it. But I’ve been tying neckties since 1974, when I played the Mr. Darling/Captain Hook role in “Peter Pan” at Camp Wise and had to tie a tie onstage while delivering lines. You don’t forget.

The COVID-19 era was pants optional, business conducted from your living room. Now, with the non-wackadoodle segment of the country getting vaccinated, and beginning to emerge from our long hibernation, the question is: Are we going to start dressing up? Or go to work in sweats? Or even buy new clothes? Those with a dog in the race are optimistic.

“The courts aren’t open, there’s no theater, no trade shows, the financial institutions are all still closed,” said Scott Shapiro, owner of Syd Jerome, the high-end Loop men’s clothing store, which has had plywood over its windows since August.

“There’s no reason to put displays in the windows because nobody is walking by,” said Shapiro.

Even without mannequins displaying cashmere sweaters and Italian belts, “our customers are slowly coming back.” A certain Chicago milieu is always going to look sharp.

“A big portion of what we sell is to plaintiff’s attorneys, your [personal injury] workman’s comp divorce guys,” said Shapiro. “Wearing ties is part of their persona.”

He tried to convince one prominent lawyer shooting a TV commercial during the pandemic to switch to a zip sweater with an open collar. “Show a warmer, softer side,” he urged.

“I’m the suit guy,” the counselor replied. “They expect to see me in a suit.”

Suit guys are like that. In early April, Chicago Cut Steakhouse threw a two-night re-opening reception after four months of being shuttered.

“Everybody was dressed up, everybody was having fun, telling great stories,” said managing partner David Flom. “It’s just great to see the world coming back, great to see people being social. At the end of the day, people love getting dressed up.”

At the top of the food chain, anyway. How about us working stiffs in the respectable middle? I checked in with Paul Rosengarten, owner of Suits 20/20 in Niles, who outfitted my boys for their bar mitzvahs and has sold me a few bargain suits too.

“Things have started to pick up,” Rosengarten said. “It’s a welcome relief. People were hesitant to go out and shop. But now, with the vaccines coming out, there’s this pent-up demand with people realizing they put on a couple pounds since they bought clothes last.”

“Guys historically wait until the last minute,” he said. “Weddings are starting up again, even proms. They’ll come in Thursday and say they need something for an event this Saturday.”

And you can handle that?

And about finding new revenue streams — for instance, the several inches of fabric cut off when pants are shortened. Pre-COVID, that went into the garbage; now, for $15 you can have a mask made that’ll match your suit.

“Guys are loving that,” Rosengarten said.

One big benefit is that customers happy to buy loafers online from Zappo’s still balk at buying a suit on Amazon.

“People are all so tired of being cooped up inside,” said Rosengarten. “There is a general satisfaction the consumer has in shopping. The want to go out and buy something. Fortunately for us, suits are one of the few things that still require some type of personal attention to fit.”

(Amazon does sell men’s suits, such as a Perry Ellis two-piece Slim Fit suit in … good Lord … a rayon/polyester/spandex blend for $96.78.)

“Guys are wearing the Slim Fit suits, even the stocky guys, the husky guys, they want to be able to put it on, buy it, go home and say, ‘Look honey, I’m wearing a Slim Fit.’”

Not this guy. My wife would just laugh.

The high profile corner of Seven Points shopping center at Lake and Hennepin in Minneapolis will be transformed into Arts & Rec, an experiential mini-golf, arts, and restaurant concept being developed … END_OF_DOCUMENT_TOKEN_TO_BE_REPLACED

The lawsuit “fails to allege sufficient facts ‘that would support an inference that defendants intentionally and purposefully discriminated against them,’” U.S. District Judge Fernando M. Olguin wrote … END_OF_DOCUMENT_TOKEN_TO_BE_REPLACED