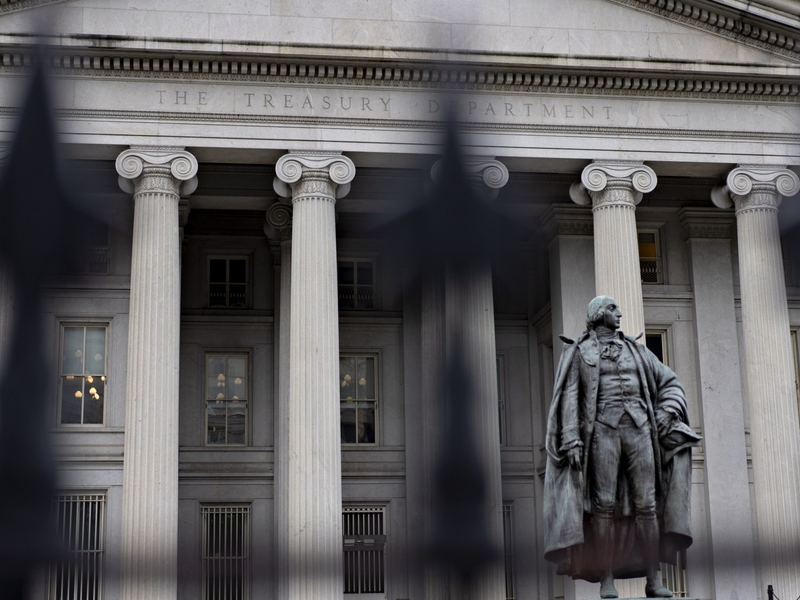 “It does mean some state and local governments will have to rethink,” Eric Kim, an analyst for Fitch Ratings, said in an interview on Tuesday. While “$350 billion is a lot of money,” some of the restrictions “were maybe not anticipated.”

Biden’s rescue package seeks to shore up the finances of states and municipalities that have been on the front lines of the government response to the outbreak. While municipal tax collections initially plunged at the start of the pandemic, the majority of U.S. states have seen revenue recover to pre-pandemic levels. That’s left governors and mayors grappling with how to best spend the aid.

Several officials, including leaders in Illinois, Chicago and New Jersey, had considered using the funds to pay back loans, but this week’s guidance muddles those plans.

“Expenses related to financing, including servicing or redeeming notes, would not address the needs of pandemic response or its negative economic impacts,” according to a document from the Treasury. “Such expenses would also not be considered provision of government services, as these financing expenses do not directly provide services or aid to citizens.”

Illinois Governor J.B. Pritzker had suggested using some of the state’s $8.1 billion in aid to repay the outstanding $3.2 billion in debt from the Federal Reserve’s emergency lending facility and to reduce unpaid bills. Illinois was the only state to borrow from the Fed last year, tapping it twice. On Tuesday, Jordan Abudayyeh, a Pritzker spokesperson, said the administration is “seeking clarification” from the Treasury on whether Illinois can use the aid to pay back the loan from the Fed.

“We need to act responsibly with these dollars,” Pritzker said during a press conference Tuesday. “I believe this is an important step toward putting our state’s fiscal house in order.”

Before the release of the guidance, Chicago Chief Financial Officer Jennie Huang Bennett had proposed using some of the city’s nearly $1.9 billion from the rescue package to pay off debt taken to close its 2020 deficit. A Chicago spokesperson didn’t have an immediate response to the Treasury’s guidance.

“These regulations, if not a surprise, certainly make it more difficult for the state of Illinois and city of Chicago to pay down the borrowing,” said Laurence Msall, president of the Civic Federation, a local watchdog group.

The rule could also affect New Jersey, which sold nearly $3.7 billion of bonds last year to cover its shortfall during the pandemic. Assembly Republican Leader Jon Bramnick, a Republican, in April had called for Governor Phil Murphy, a Democrat, to use some of the federal aid to pay down the state’s debt.

The Treasury rules also restrict using the aid to replenish reserves or rainy day funds. Industry groups are taking a close look and planning to give feedback to the Treasury on its guidance and the department is asking for comments on its 151-page document on the interim rules for the funds.

“It’s a living, breathing document,” said Irma Esparza Diggs, director of federal advocacy at the National League of Cities, who said the group is looking at those restrictions and will be talking to its members throughout the coming weeks.

For states such as Illinois that want to use the money for debt repayment, the large amount of federal aid still gives them “ample” opportunity to do what investors want to improve creditworthiness, said Ty Schoback, a senior municipal research analyst for Columbia Threadneedle Investments.

“We know that within state and local budgets, sources and uses are fairly fungible,” Schoback said. Relieving budget pressure in one area with federal aid can open up resources for other items while remaining fully compliant for the intended use, he said. “I don’t think they will have any trouble.”

Cook County this week has 51 cases per 100,000 people, up 78 percent from the prior 7-day period, CDC data shows. Under the federal agency’s recommendation, areas of substantial transmission are those … END_OF_DOCUMENT_TOKEN_TO_BE_REPLACED

Origin launched its first QOZ fund in 2018 and has committed $100 million of the $265 million it raised to five apartment projects, including one recently completed in Pilsen. Origin plans to use the … END_OF_DOCUMENT_TOKEN_TO_BE_REPLACED