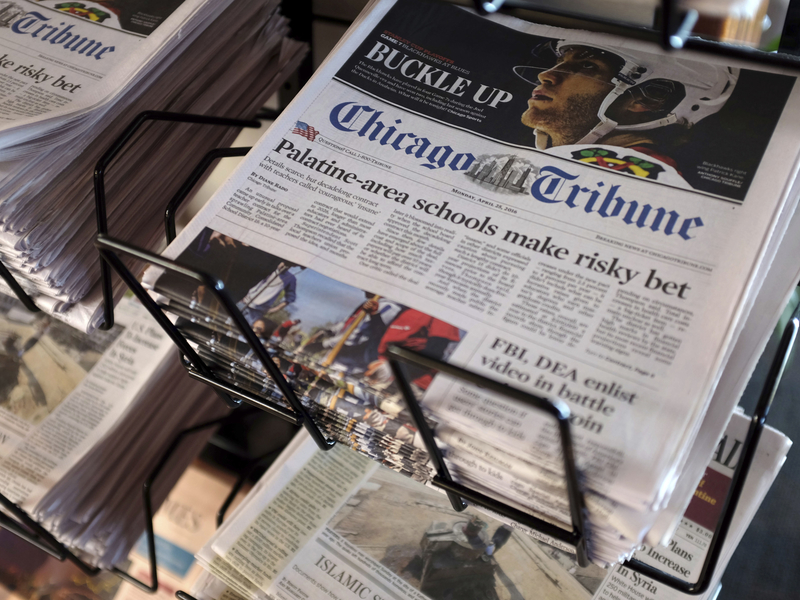 The Tribune shareholder vote, tabulated May 21, came after months of behind-closed-doors drama as well as quite public soapboxing by journalists employed in Tribune-owned newsrooms. Those journalists, along with a billionaire or two dragooned into service to counter Alden’s bid, were hoping to stave off what proved to be inevitable: the passage of their newsrooms into the hands of financiers who have earned a reputation for harsh cost-cutting at media properties ranging from the San Jose Mercury News to the Boston Herald. In the end, shareholders accepted Alden’s $17.25-a-share offer for the two-thirds of Tribune shares that the New York-based hedge fund didn’t already own.

As the media business has grappled with the financial fallout of a painful transition from a print world to a digital one, Alden has found opportunity to scoop up stakes in roughly 200 U.S. newspapers. Along the way, it has laid off swaths of journalists and undercut the kind of local reporting that monitors the doings of the powerful and illuminates the sufferings of the unfortunate. Washington Post media columnist Margaret Sullivan put it this way in 2018 after Alden announced a round of cutbacks at the Denver Post: The New York-based hedge fund is “one of the most ruthless of the corporate strip-miners seemingly intent on destroying local journalism.” And she wasn’t wrong.

Here in Chicago, Alden’s triumph clouds the future of the Chicago Tribune, which is not only one of the two dominant daily newspapers in the city but is in many ways the most important news organization in the Midwest. Don’t get us wrong—we view the Tribune as prime competition and relish every opportunity to duke it out with their staff as well as the Chicago Sun-Times and the myriad broadcast and niche publications that cover the Chicago area. But that, in a way, is the point: The competition for scoops and insights benefits all Chicagoans by surfacing information that those in power would prefer their constituents didn’t know, by showcasing opinions that challenge the status quo and by shining a light in dark corners. If past is prologue, the biggest player in that competition is about to be diminished, perhaps significantly. And in the end, that benefits no one.

Chicago has always been a hub of hard-hitting journalism, dating back to the days when titles like the Chicago American and the Chicago Daily News scrapped with one another for readers and scoops. Today, as some big cities face the prospect of a future with no daily newspaper at all, Chicago can take pride in the fact that it’s still home to two—a signifier, at least to some observers, that a city still deserves to be thought of as world-class.

Journalism is an expensive enterprise. It costs money to chase leads that might not pan out, to cover local zoning or school board meetings that most people are too busy or disinterested to attend themselves, or to wait by the phone for an interview with an elected official or a real estate developer who may have a dozen reasons not to want to talk publicly about their day-to-day work.

Like any for-profit enterprise, a media business needs to make money for its owners. But if there’s anything media owners have learned since the turn of the 21st century, it’s that trying to produce news on the cheap is a losing game. Readers won’t pay for commodity news that they can get elsewhere for free, nor will advertisers want to place their brands next to it. That means survival depends on creating high-quality, unique content. And that can only be done by employing bona fide journalists.

Sadly, journalism doesn’t seem to be the game that Alden is really playing. As Crain’s columnist Joe Cahill once explained, Tribune Publishing sports a large and growing cash stockpile—roughly $250 million at last count. The company also lacks a significant amount of debt, and it possesses other assets that could be sold for cash in the neighborhood of $30 million to $60 million. Barring a legal challenge to the acquisition, Alden would control all that cash. Whether it can keep the cash spigot flowing post-acquisition is another question. But for now, that quarter of a billion dollars may be all the comfort Alden needs as it contemplates its longer-term challenges.

Harmon finally adjourned the Senate with the prediction that a bill ultimately would pass. Environmental advocates and union representatives would meet "as soon as tonight" to continue to try to hash … END_OF_DOCUMENT_TOKEN_TO_BE_REPLACED

Who ever thought that we could transition so quickly from high to low inventory? Of course, there are still houses for sale. For instance, Winnetka currently has 46 listed homes, some of which … END_OF_DOCUMENT_TOKEN_TO_BE_REPLACED