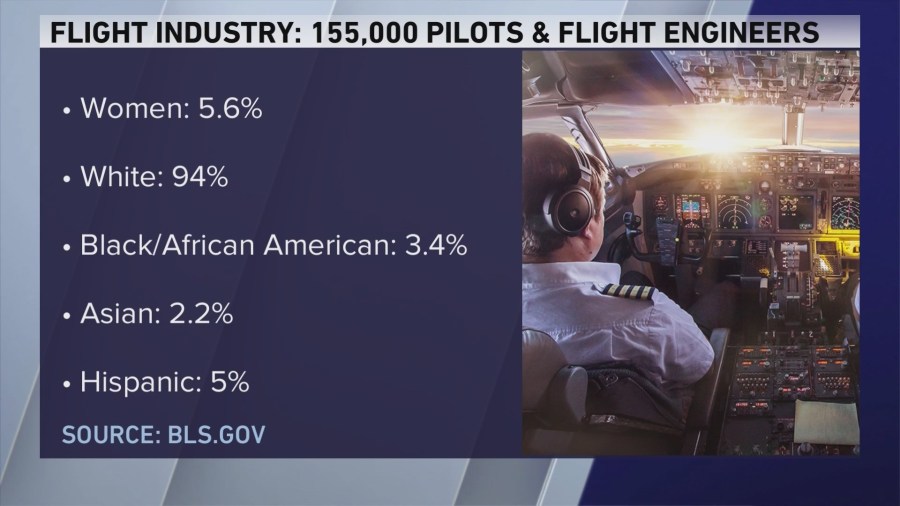 Gabrielle Harding knew at age 15 that she wanted to become an airline pilot.

For the past 14 years, she has worked for one of the biggest airlines in the world, United, where she is considered a rising star.

Harding credits the Girl’s Scout for sending her to space camp and the Tuskegee Airmen Detroit chapter for taking her on the plane ride that launched her dream of becoming a pilot.

“It’s exposure, it’s exposing people to the fact that they can join this career and become an airline pilot,” she said.

The airline, whose headquarters reside in Chicago, has pledged to train 5,000 new pilots by 2030 at its Aviate Academy flight school.

Half of the attendees will be women and people of color.

“I’m delighted,” said Ken Rapier, an airline transport pilot and the Chicago DODO chapter president for Tuskegee Airmen Incorporated. He told WGN he knows firsthand how hard it is to become a pilot.

A hiring freeze was instituted just as he was set to enter the final interview phase with the airline. While he was never hired, he applauded United for its pledge.

“You have to see it to achieve it,” he said.

Harding says there’s no better career, especially because of the perks of the job.

“It’s definitely a lucrative career and you get to meet interesting people and learn a lot about different cultures because you get to experience them firsthand,” she said.

Candidates do not have to have flying experience. And because the school is an expensive endeavor, over $2 million in scholarship money is being made available.

The high profile corner of Seven Points shopping center at Lake and Hennepin in Minneapolis will be transformed into Arts & Rec, an experiential mini-golf, arts, and restaurant concept being developed … END_OF_DOCUMENT_TOKEN_TO_BE_REPLACED

The lawsuit “fails to allege sufficient facts ‘that would support an inference that defendants intentionally and purposefully discriminated against them,’” U.S. District Judge Fernando M. Olguin wrote … END_OF_DOCUMENT_TOKEN_TO_BE_REPLACED