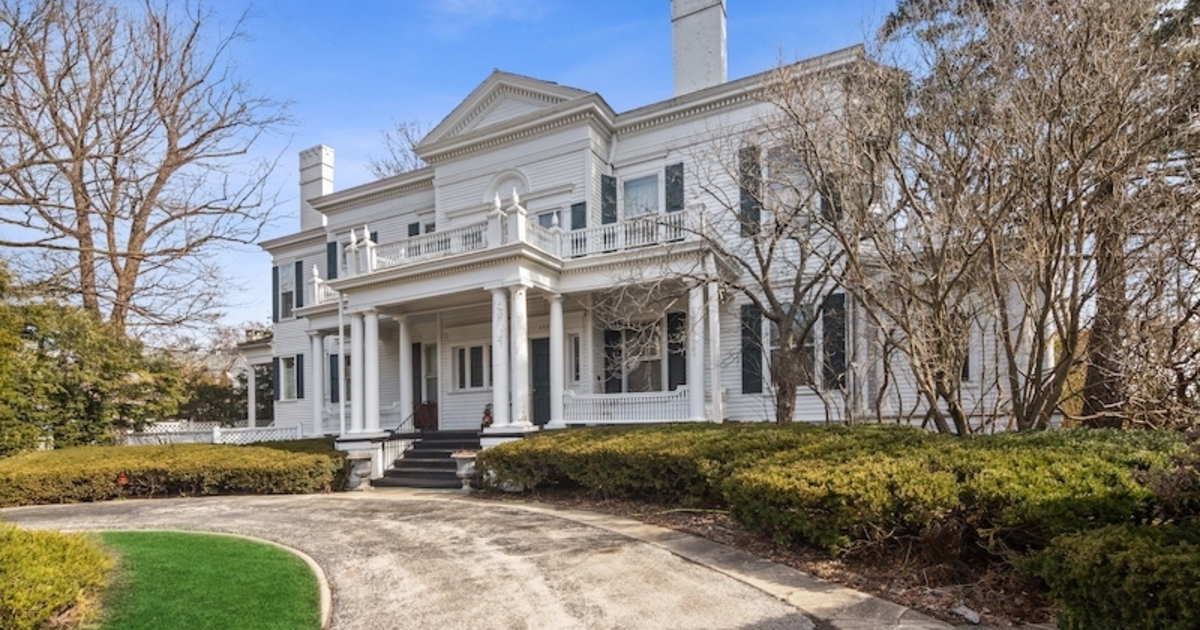 The Challenger house, on Sheridan Road, is six bedrooms and about 5,360 square feet on 1.75 acres, with 151 feet of Lake Michigan shoreline. Built around 1902, it has been in the Challenger family since 1970. The property, which includes a coach house and a greenhouse, will go on a private agents-only network next week.

The home is in livable condition but needs extensive updating, according to Annie Challenger, the Baird & Warner agent representing the house for herself and four other heirs of James, who died in 2019, and Ruth, who died in 2008.

“Either way you go, it’s a project,” Annie Challenger said. “Either you love the house and want to restore it as a project, or you decide to build your own and it’s still a project.”

A buyer who wants to renovate the existing house “would have to be somebody who’s interested in the beauty of the houses they built back then,” Challenger said.

A buyer who plans to demolish would be paying about $9.1 million per acre, compared to the roughly $7.24 million per acre that buyers paid in 2020 and 2021 to buy a row of three separate lakefront parcels to create a 3.3-acre home site. Those parcels, whose combined purchase price totaled $23.9 million, are about a mile south of the Challenger property.

The Classical Revival house, white clapboard with a pillared front porch, has hefty oak paneling and other trim on the interior, views east to the lake from the primary and some other bedrooms, and some original hardware on the doors, according to Challenger.

“It’s a magnificent house to grow up in,” Challenger said. Despite it being in the family for five decades, she said she and her siblings are not pushing for buyers to rehab.

“We have to be realistic about the condition of the house,” she said.

Regardless of what they do with the house, the buyers likely will do some work on the property’s access down the bluff to the beach. Challenger said her father preferred to keep the bluff feeling private, not exposed, so it is mostly covered with big trees and has only a slender, aged staircase down to the water.

In the early 1960s, James Challenger was in the kitchen appliance business when he spotted an opportunity, his son told Crain’s Steven Strahler in 2019: “finding progressive companies to take care of employees on their way out,” said John Challenger. “People weren’t very good at looking for work—especially in those days—as the principle of lifetime employment disappeared.”

Challenger Gray became a well-publicized source of reports on job cuts, CEO turnover, holiday bonuses and corporate policies on social media use and sexual harassment, Strahler wrote in 2019. It also charted the impact on the workplace of attention-draining pursuits like fantasy football. James Challenger was still chairman of the firm when he died.

Annie Challenger said the family has spent the intervening time cleaning out the house to get it ready to sell.

The names of the house’s original owners and architect or builder are lost, according to the Winnetka Historical Society. Prior to the Challengers, it was owned from 1919 until 1970 by the family of William and Alma Hay. James and Ruth Challenger paid $200,000 for the property in 1970, according to Annie Challenger. That’s the equivalent of about $1.46 million today.

Aside from the trio of purchases by one buyer, the last time a home in Winnetka sold for over $10 million is 2018, when two different homes each went for $12 million within a few weeks of one another.

CHICAGO — Former Ukrainian troops are visiting Chicago to pay tribute to their brothers-in-arms this Memorial Day Weekend. Ukrainian veterans who fought in places like the Donbas region and the … END_OF_DOCUMENT_TOKEN_TO_BE_REPLACED

Hart was promoted to president from general counsel in 2020, but the CARES Act compensation limits were based on 2019 pay. His total compensation last year was estimated at $3.5 million, mostly … END_OF_DOCUMENT_TOKEN_TO_BE_REPLACED

After an often-contentious floor debate, the Chicago City Council has passed a new weekend curfew for the city’s residents, moving it back from 11 p.m. to 10 p.m. on weekends. The new ordinance will … END_OF_DOCUMENT_TOKEN_TO_BE_REPLACED