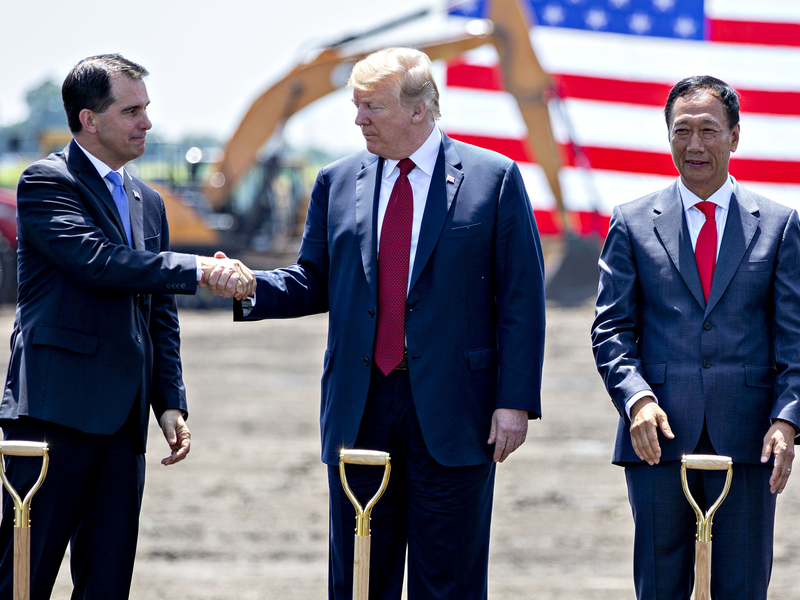 “The last deal didn’t work for Wisconsin, and that doesn’t work for me,” he said when he unveiled the new agreement. He added that it “will save taxpayers $2.77 billion, protect the hundreds of millions of dollars in infrastructure investments the state and local communities have already made, and ensure there’s accountability for creating the jobs promised.”

Wisconsin’s troubled dance with Foxconn is a case study in cynical and damaging policy theatrics. It’s also a reminder to President Joe Biden’s administration, which has made public-private partnerships a cornerstone of some of its most ambitious infrastructure plans, that the government has to be just as tough and deft at dealmaking as the businesses it courts.

That was, after all, one of Trump’s mantras when he campaigned for president. “If I’m president,” he announced during one GOP debate, “there won’t be stupid deals anymore.” He went out of his way to bask in the media spotlight with Walker and Foxconn’s chairman at the time, Terry Gou, when the Wisconsin deal was announced and when ground was broken on a plant meant to churn out oversized flat panel displays. The plant, Trump opined, would be “the eighth wonder of the world.”

Walker, like Trump, wanted to claim he had revived manufacturing in his state and he trumpeted the Foxconn transaction as an epic victory.

“This is about something that someday, maybe 10 or 15 or 20 years from now, those of us in public service who are either elected or appointed, and others in the community, in the private sector, will look back and say: ‘We were part of that day. We were part of that moment,’” he said in 2017. “We were part of the thing that was so transformational, it changed and put Wisconsin on the map on a global basis like nothing we’ve ever seen before.”

“They chose us because we’re ready,” Walker also said back then. But he and his statehouse team were hardly ready. They reportedly had no experience negotiating contracts with big Asian corporations. And they apparently didn’t bother recruiting outside consultants with deep industry expertise who might have helped them navigate the complex — and possibly insurmountable — supply chain, manufacturing and labor hurdles that arise in a competitive market such as flat-panel production.

They just dove in, promising to give Foxconn a subsidy that exceeded Wisconsin’s annual spending on its public university system and its prisons. For anyone informed about Gou’s track record as a negotiator and the realities of the global electronics market (in other words, people other than Trump and Walker), the specifics of Wisconsin’s initial agreement with Foxconn, first spelled out on the back of a napkin, were risible.

As my Bloomberg Opinion colleague Tim Culpan observed when the deal was forged, the $3 billion Walker was offering to help subsidize Foxconn’s Wisconsin payroll amounted to as much as $1 million apiece for jobs that were going to provide average annual salaries of $54,000. That $10 billion, 20-million-square-foot plant Gou said he would build? Culpan said the only way an investment of that magnitude could pay off would be to keep staffing at a minimum and automate production. “This LCD factory will be either labor intensive or highly automated. It can’t be both,” he noted.

In the end, Foxconn committed only to building a far less grandiose operation in Wisconsin and never met the hiring goals in the initial deal. It says it will now invest $672 million instead of $10 billion in the project and create 1,454 jobs rather than 13,000. Fortunately for Wisconsin’s taxpayers, Evers has also prevented billions of dollars of subsidies to remain in play. (Because Wisconsin exempts manufacturers from paying taxes, the subsidy would have been funded with taxpayers’ cash.)

But Wisconsin has already spent about $237 million on infrastructure, local grants and other payments associated with the Foxconn deal. It also granted Foxconn extensive water rights along its ecologically vulnerable lakeshore and used eminent domain laws to demolish local housing.  The Wisconsin township and county where Foxconn’s plant is based have also spent at least $190 million on infrastructure and land, including at least $160 million to raze 132 properties and relocate their residents. “They demolished my house for this?” one displaced resident told the Guardian. “It’s upsetting. That’s where my old house was, and now it’s just nothing. You know? Nothing.”

All of this came to pass because the Foxconn charade served the financial and political interests of Gou, Trump and Walker even if it didn’t serve the business, workplace and social interests of Wisconsin’s residents. It also came to pass because Walker and his team were inept rookies who didn’t know how to cut a deal. Those are all lessons that shouldn’t be lost on Biden as he partners with the best and brightest in the business community.

Timothy L. O’Brien is a senior columnist for Bloomberg Opinion.

CHICAGO — The City Council on Monday delayed a vote on Mayor Lightfoot’s curfew change — but a group of young residents are urging members to vote no. The young adults are part of the racial … END_OF_DOCUMENT_TOKEN_TO_BE_REPLACED

The fire at the former Pheasant Run Resort, 4051 E. Main St., broke out Saturday afternoon, sending huge plumes of smoke into the sky surrounding the closed resort and drawing dozens of onlookers who … END_OF_DOCUMENT_TOKEN_TO_BE_REPLACED

As the 2022 political season gets into full swing, one of the most intriguing candidates for elected office is Herschel Walker. The star running back with the University of Georgia and Dallas Cowboys … END_OF_DOCUMENT_TOKEN_TO_BE_REPLACED