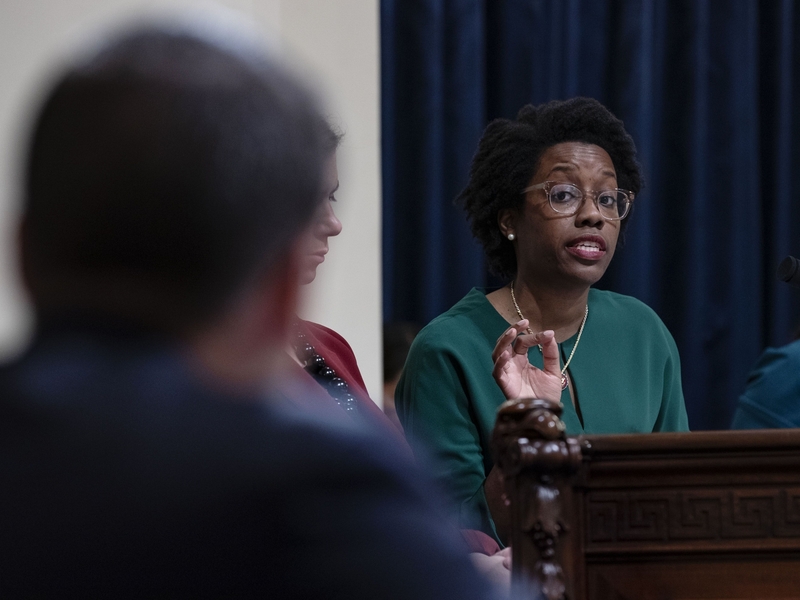 It’s hard to generalize, but they tend to include those who weren’t subject to the AMT before (so they were used to taking the full SALT deduction). Democrats in high-tax states are under pressure, since they know how important SALT is to voters, and they sense an opportunity as key political leaders have voiced support.

Ideally, there should be a simplified tax code with lower rates and fewer deductions, among other reforms. But since that doesn’t seem likely anytime soon, a more practical way forward may be found in a proposal from Representative Lauren Underwood, an Illinois Democrat.

Keeping a deduction limit in place helps to ensure that the wealthiest aren’t reaping the biggest gains. A full repeal of the cap would give the top 1% of earners (those making at least $540,000) the largest bump, with an after-tax increase in income of 2.8%, according to estimates from the Tax Foundation. Capping the deduction at Underwood’s limits would give them an increase of just 0.37%, with other income quintiles benefiting more.

More specifically, take a look at New York. The average SALT deduction was more than $10,000 in dozens of less affluent counties upstate. A $15,000 or $30,000 cap could potentially benefit many taxpayers who are considered middle class in those places.

The proposal also addresses an unfair marriage penalty where two single filers could each claim a $10,000 SALT deduction, but once they marry and file jointly they’re still limited to $10,000 (or $5,000 if married filing separately). The tax law fixed some of the ways the tax code penalizes married couples, but the SALT cap remains an outlier.

Finally, the cost of increasing the SALT cap rather than completely repealing it is substantially less. It is estimated that a full repeal of the cap would reduce federal revenue by $380 billion, if it stayed on the books until 2026 (when it’s scheduled to expire under the tax law). Increasing the cap to $15,000 or $30,000 would cost $135 billion during the same time period, Tax Foundation estimates show.

There are other options to modify the SALT cap, such as only allowing the benefit for taxpayers’ earnings below certain incomes, or swapping the deduction for a credit. But Underwood’s seems to be the most targeted, effective and least burdensome to administer.

Unless SALT deduction supporters want to wait until the cap expires at the end of 2025, her plan might be the best compromise to help taxpayers who could actually use a break now.

CHICAGO — The City Council on Monday delayed a vote on Mayor Lightfoot’s curfew change — but a group of young residents are urging members to vote no. The young adults are part of the racial … END_OF_DOCUMENT_TOKEN_TO_BE_REPLACED

The fire at the former Pheasant Run Resort, 4051 E. Main St., broke out Saturday afternoon, sending huge plumes of smoke into the sky surrounding the closed resort and drawing dozens of onlookers who … END_OF_DOCUMENT_TOKEN_TO_BE_REPLACED

As the 2022 political season gets into full swing, one of the most intriguing candidates for elected office is Herschel Walker. The star running back with the University of Georgia and Dallas Cowboys … END_OF_DOCUMENT_TOKEN_TO_BE_REPLACED