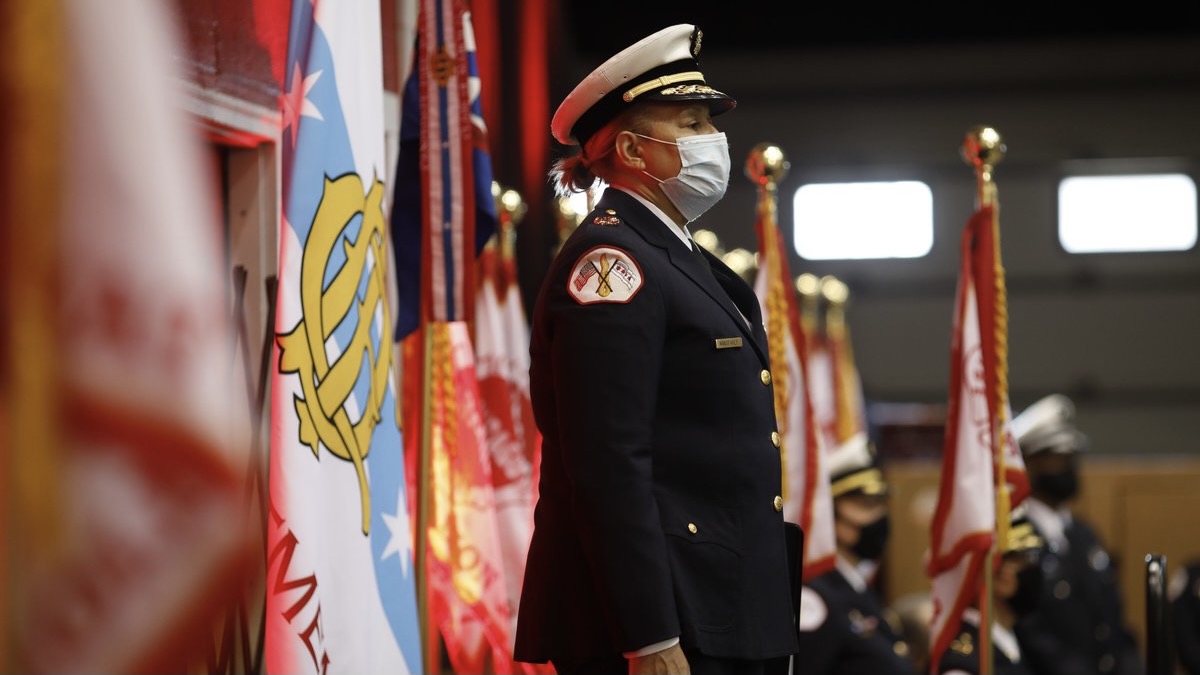 Annette Nance-Holt stands at attention while Mayor Lori Lightfoot announces her nomination as the next commissioner of the Chicago Fire Department. (Credit: Chicago Mayor’s Office)

If confirmed by the Chicago City Council, Nance-Holt would be the first Black woman to lead the department.

Lightfoot made the announcement at the swearing-in ceremony for 42 paramedics, who greeted their new chief with an enthusiastic round of applause and cheers.

Nance-Holt’s pending confirmation will be “yet another crack in that glass ceiling,” the mayor said.

“I know a thing or two about firsts, so Madam Commissioner, welcome to the club,” said Lightfoot, the first Black woman and first gay person to serve as Chicago’s mayor.

A Chicago native and 31-year veteran of the Chicago Fire Department, Nance-Holt, 56, served as the department’s No. 2 official under former Commissioner Richard C. Ford II. Nance-Holt led the department after Ford retired April 2 after reaching the department’s mandatory retirement age of 63.

With the all-but-certain approval of the City Council, Nance-Holt will lead a department that has a long track record of discrimination and sexual harassment complaints.

Lightfoot acknowledged Friday that “more work remains in order to eliminate discrimination, racism and sexism from the firefighter profession.”

The more than 5,000-member department, which is 90% male and 66% white, has been sued many times by prospective, current and former members alleging they were subjected to discrimination and sexual harassment while in uniform.

Approximately 16% of firefighters and paramedics are Black, and another 16% are Latino. The city’s population is approximately one-third white, one-third Black and one-third Latino, according to census figures.

The class of paramedics that graduated Friday was 60% white and 69% male, according to data provided by the mayor’s office.

“The Fire Department must have membership and leadership that mirrors the communities it serves every day,” Nance-Holt said in a statement. “As a child, I never laid eyes on either a female firefighter or a firefighter of color. There were no role models who looked like me, and so I never thought that becoming a firefighter, which was my dream, would be a possibility for me. As fire commissioner, I intend to show the next generation of young black women that they too can achieve any and everything they set their minds and hearts to.”

Nance-Holt’s 16-year-old son Blair Holt was killed in 2007, when he shielded a classmate from gunfire a crowded CTA bus. Michael Pace, a member of a gang, is serving a 75-year prison sentence for killing the Julian High School honor student.

As the department’s first deputy, Nance-Holt earned $197,736 annually, while Ford earned $217,728 annually as the leader of the Chicago Fire Department.

CHICAGO (CBS) — Four people were injured Wednesday evening in an accident at the busy intersection of 79th Street, Stony Island Avenue, and South Chicago Avenue. The crash happened at 7:11 p.m. at the … END_OF_DOCUMENT_TOKEN_TO_BE_REPLACED

Real estate investors re-entered the housing market in a big way in the second quarter of 2021, and Chicago is at the top of the list for investor purchases, according to a new report. The study by … END_OF_DOCUMENT_TOKEN_TO_BE_REPLACED