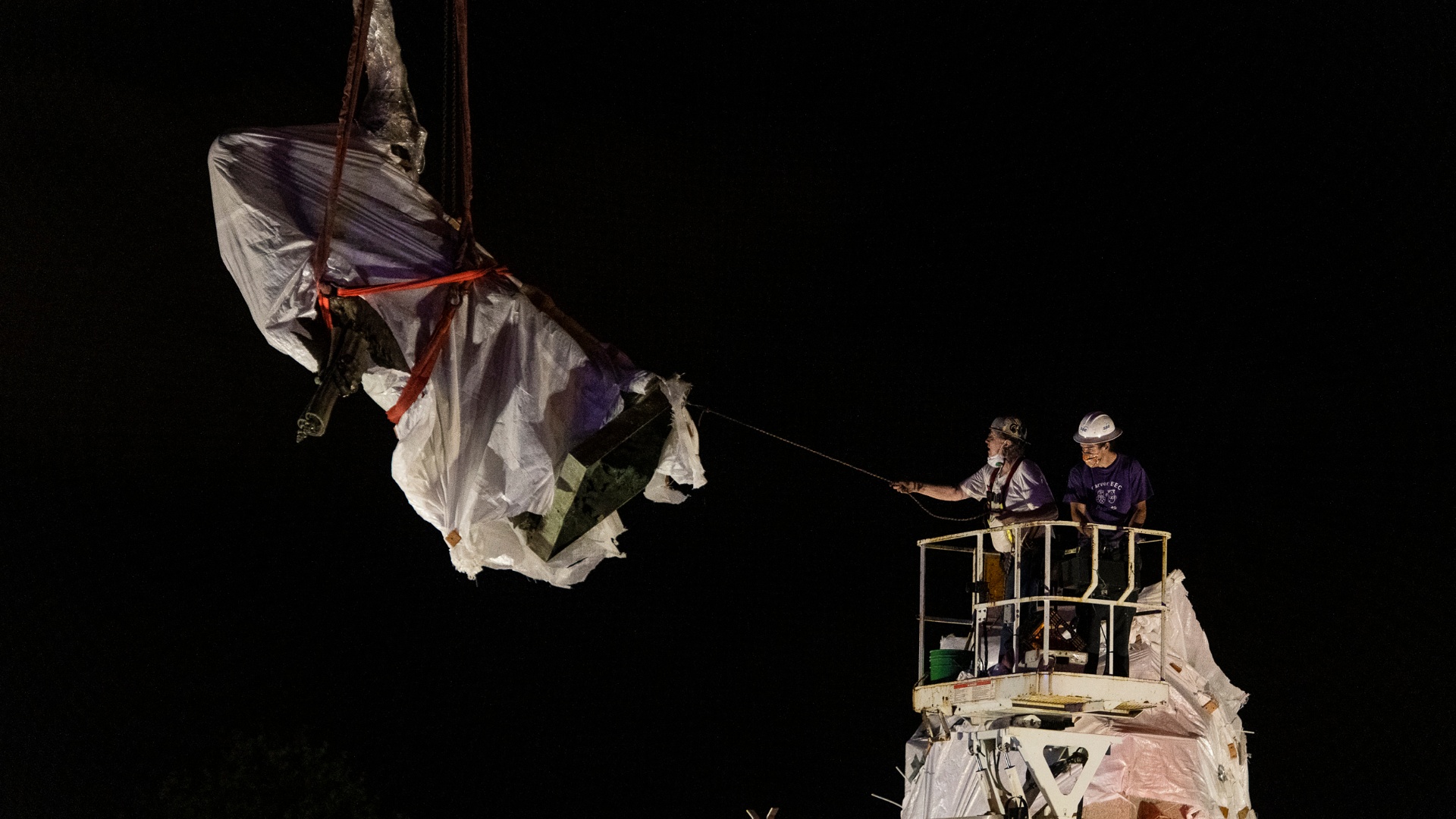 City municipal crews help guide the Christopher Columbus statue in Grant Park as it is removed by a crane, Friday, July 24, 2020, in Chicago. A statue of Christopher Columbus that drew chaotic protests in Chicago was taken down early Friday amid a plan by President Donald Trump to dispatch federal agents to the city. (Tyler LaRiviere / Chicago Sun-Times via AP)


A “racial healing and historical reckoning project” launched by Mayor Lori Lightfoot after she removed the city’s three statues of Christopher Columbus has stalled, and the statues remain in storage a year after they were wrenched from their pedestals.

Lightfoot ordered the city’s three statues of the Italian explorer to be removed in the early morning hours of July 24, 2020, after the statue in Grant Park became a flashpoint for protests against racism and police brutality in wake of massive social justice protests touched off by the police murder of George Floyd in May 2020.

Lightfoot vowed that the statues’ pedestals would be empty only temporarily, and soon launched the Chicago Monuments Commission to “provide a vehicle to address the hard truths of Chicago’s racial history” and detail how the city could “memorialize Chicago’s true and complete history.”

After six months of work, that commission flagged 41 monuments as “problematic,” in February touching off a firestorm by including statues of four presidents, including native son Abraham Lincoln.

Meant to conclude its work in April, the commission will continue its work this summer with a series of in-person neighborhood programs, said Cesar Rodriguez, Lightfoot’s press secretary.

“The city’s efforts throughout this process have not been about a single statue or mural, but about creating a formal process that will reflect our values and elevate our rich history and diversity,” Rodriguez said.

The commission plans to issue a report in the coming months, said Jamey Lundblad, a spokesperson for the Department of Cultural Affairs and Special Events.

The commission’s website does not list any dates or location for in-person meetings about the monuments project, although it does list the Floating Museum’s Critical Distance exhibit. Chicago-based artist Faheem Majeed, the museum’s co-director, is a member of the Chicago Monuments Project Advisory Committee.

Chicagoans can submit feedback via an online form.

City officials declined requests from WTTW News to interview Bonnie McDonald and Jennifer Scott, who are co-chairs of the commission along with Department of Cultural Affairs and Special Events Commissioner Mark Kelly, who announced his retirement earlier this month.

A month after the commission released the list of problematic monuments, the commission’s website was updated with a “frequently asked questions” section to detail why the statues of the four presidents and other monuments were flagged.

Washington’s statues were flagged because he enslaved people at Mount Vernon, while Lincoln’s “historical role as an escalator of Indian removal” merits reconsideration of monuments in his honor, according to the commission.

Statues of President Ulysses S. Grant and William McKinley should also be examined in light of their role in displacing native people and advancing colonialism, according to the commission.

The commission flagged the Illinois Centennial Monument in Logan Square because the beloved landmark and gathering point does not recognize the “violent removal” of American Indians from Chicago, according to the commission.

In addition, Daniel Chester French’s “The Republic” was flagged because it was originally crafted to celebrate the 1893 World Columbian Exposition in Jackson Park, an “event that presented a highly distorted vision of Chicago’s past and present,” according to the commission.

The commission’s work is intended to start “a long overdue and necessary conversation,” according to its website.

But the website is silent on the concerns revolving around the three Columbus statues.

Ron Onesti, the president of Chicago’s Joint Civic Committee of Italian Americans, said he remains deeply frustrated that the statues remain in storage a year after they were removed. In February, he told WTTW News it was a “bitter pill” to swallow to see the empty pedestals — a feeling he said this week has only grown.

The committee announced Thursday that it would sue the city in an attempt to get the statue of Columbus returned to Arrigo Park in Little Italy on the city’s West Side based on a 1973 agreement the committee inked with the Chicago Park District to display the statue.

“We have been respectful, communicative and resourceful,” Onesti said. “Their lack of response has made litigation unavoidable so as to protect the interests of Chicago’s Italian American community.”

A representative for Vistria declined to comment. Founded in 2013 and led by Marty Nesbitt and Kip Kirkpatrick, Vistria manages more than $8 billion in assets and invests across health care, education … END_OF_DOCUMENT_TOKEN_TO_BE_REPLACED