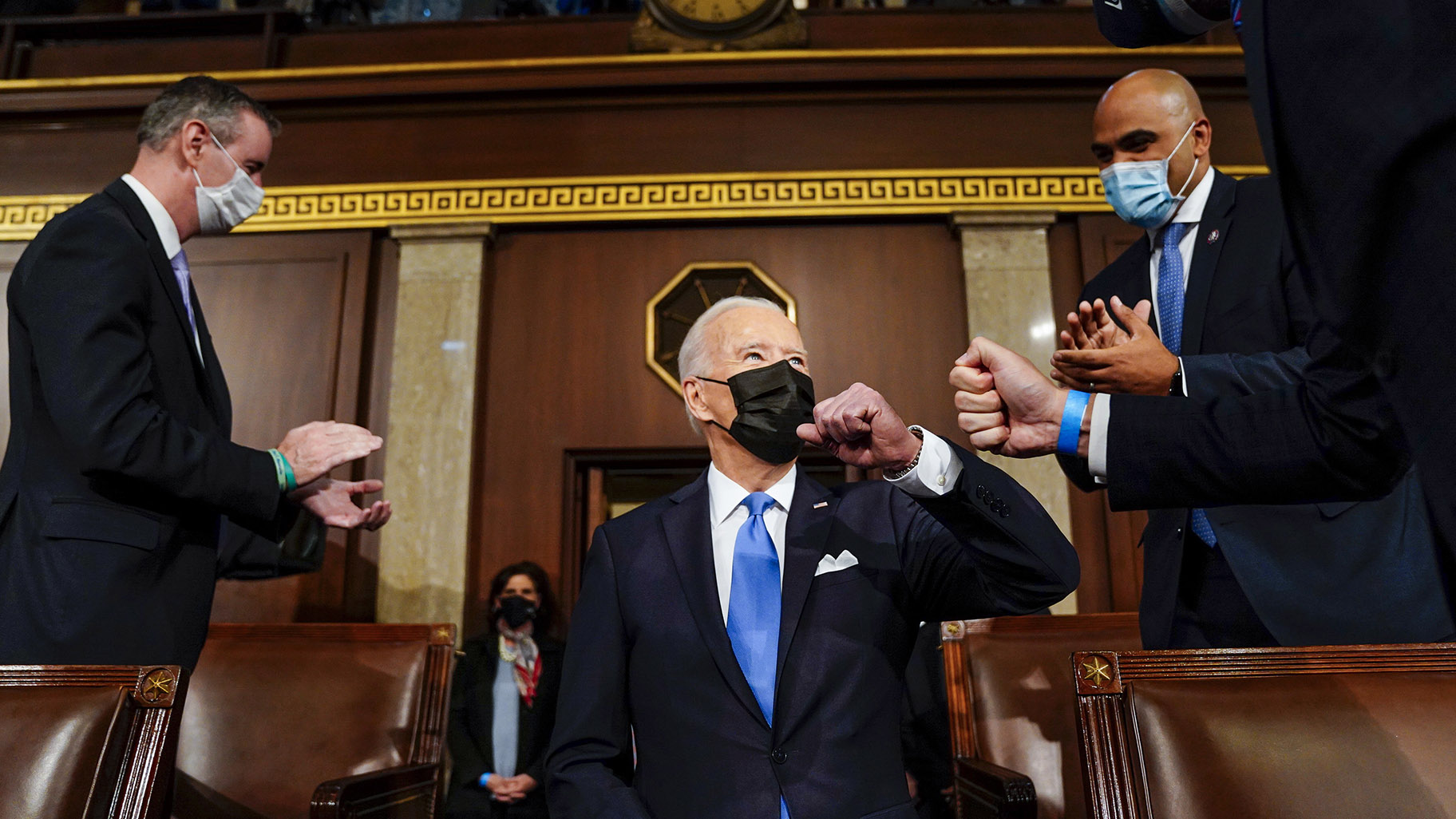 President Joe Biden arrives to speak to a joint session of Congress, Wednesday, April 28, 2021, in the House Chamber at the U.S. Capitol in Washington. (Melina Mara / The Washington Post via AP, Pool)


WASHINGTON (AP) — President Joe Biden laid out a long list of policy priorities in his speech to Congress — and some are more politically plausible than others.

The two parties are working together in some areas, including on changes to policing and confronting the rise of hate crimes against Asian Americans. But Republicans are likely to block other Democratic initiatives on immigration and voting rights.

On some of Biden’s top priorities, Democrats may choose to find ways to cut out Republicans entirely. The president told lawmakers that “doing nothing is not an option” when it comes to his two massive infrastructure proposals, which would cost $4.1 trillion.

A look at what’s possible, and what’s unlikely, when it comes to action in Congress:

While they can’t use that tactic on every piece of legislation, Democrats might return to the same procedure for Biden’s two signature proposals — his $2.3 trillion infrastructure jobs plan, which would rebuild roads and bridges, boost broadband access and make other improvements; and his $1.8 trillion families plan, which would expand preschool and college opportunities, create a national family and medical leave program, distribute child care subsidies and make other similar investments.

Republicans have proposed a much smaller $568 billion infrastructure package, and both sides have shown a willingness to negotiate. But their differences are broad — including on how they would pay for the plans and whether to raise taxes — and Democrats are intent on passing a major infrastructure boost this year, with or without GOP support.

“We’ve talked about it long enough — Democrats and Republicans,” Biden said in his speech. “Let’s get it done this year.”

Democrats and Republicans have fallen out of the habit of working together, as President Donald Trump’s tenure was mostly dominated by partisan division. But they have edged a bit closer to bipartisanship on some topics since Biden took office, including on police reform, gun control and efforts to reduce violence against women.

All of those bills are still heavy lifts in the evenly divided, 50-50 Senate. But negotiations are underway, and members of both parties have signaled that they want legislation passed.

Both parties say they were encouraged last week by the Senate approval of a bill to combat the rise of hate crimes against Asian Americans and Pacific Islanders. The legislation passed 94-1 after Democratic Sen. Mazie Hirono of Hawaii worked with Republicans to reach a compromise. In his speech, Biden thanked the Senate and urged the House “to do the same and send that legislation to my desk as soon as possible.”

Compromise on the other bills, such as the policing overhaul, will not come as easily. Republican Sen. Tim Scott of South Carolina is negotiating with Democrats to change some of the nation’s policing laws following the death of George Floyd in Minneapolis last year and the conviction this month  of the officer who killed him. A Democratic bill passed by the House would allow police officers to be sued, would ban chokeholds and would create national databases of police misconduct. Scott’s GOP proposal doesn’t go as far but does have some similar provisions.

Democrats have pushed to finish the negotiations by the anniversary of Floyd’s death at the end of May, and Biden endorsed that timeline in Wednesday night’s speech. But Scott has not made a similar commitment.

Changes to gun laws — long one of the most divisive issues in Congress — could be even more difficult, even though there’s widespread public support for some measures. Democrats hope to expand background checks, especially in the wake of several mass shootings in recent weeks. Many Republicans would back an expansion of background checks, as well, but would not go as far as Democratic legislation passed in the House in March. Bipartisan Senate talks have so far failed to yield a compromise.

Senators in both parties have also expressed interest in finding agreement on a House-passed bill that aims to reduce domestic and sexual violence against women, but they have disagreed on provisions in the legislation that could keep guns out of the hands of abusers, among other matters.

Biden introduced the original Violence Against Women Act in June 1990 when serving as chair of the Senate Judiciary Committee, and the legislation has since been passed four times. “It’s estimated that more than 50 women are shot and killed by an intimate partner every month in America,” Biden said Wednesday. “Pass it and save lives.”

The list of long-shot bills on Biden’s agenda is much longer.

At the top of that list is Democrats’ wide-ranging effort to overhaul U.S. elections, legislation that would create automatic voter registration nationwide, promote early voting, require more disclosure from political donors and restrict partisan gerrymandering of congressional districts, among other changes. Senate Republicans are unanimously opposed to the measure, which has already passed the House, arguing it is designed to help Democrats win elections.

Democrats’ eagerness to pass the legislation — which Biden said in his speech would “restore the soul of America” by protecting the sacred right to vote — could eventually prompt them to change filibuster rules in the Senate. But the party is not yet united on such a move, and a decision isn’t expected soon.

Immigration is another intractable matter.

The Democratic-led House approved a pair of bills creating a pathway to citizenship for young “Dreamers” in the U.S. since childhood, immigrants who fled wars or natural disasters, and migrant farm workers. Sens. Dick Durbin, D-Ill., and Lindsey Graham, R-S.C., have introduced legislation giving “Dreamers” a chance for citizenship, and there have been some bipartisan talks among senators.

But Republicans have latched onto the huge numbers of migrants seeking to cross the southwest border as a fertile campaign issue. And many in the GOP are demanding tough border security restrictions as their price for cooperation.

Several other policy priorities appear stalled, for now, including legislation to enshrine LGBTQ protections in the nation’s labor and civil rights laws and bills to protect unions and raise the minimum wage.

CHICAGO (CBS) — Four people were injured Wednesday evening in an accident at the busy intersection of 79th Street, Stony Island Avenue, and South Chicago Avenue. The crash happened at 7:11 p.m. at the … END_OF_DOCUMENT_TOKEN_TO_BE_REPLACED

Real estate investors re-entered the housing market in a big way in the second quarter of 2021, and Chicago is at the top of the list for investor purchases, according to a new report. The study by … END_OF_DOCUMENT_TOKEN_TO_BE_REPLACED