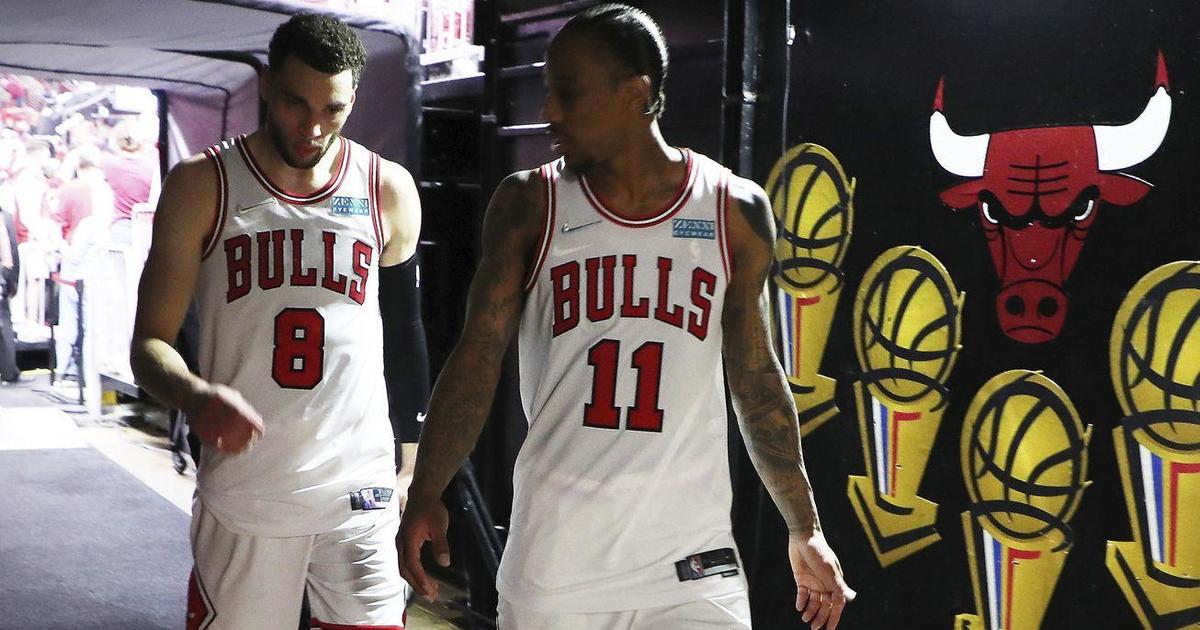 CHICAGO (CBS) — The Bulls’ season has come to a close, after they were eliminated from the NBA Playoffs Wednesday night following their Game 5 loss to the Milwaukee Bucks in the first round.

Without Zach LaVine and Alex Caruso on Wednesday night, the Bulls didn’t have much of a chance to extend the series to a Game 6.

Thus, the Bulls closed their season with a first-round playoff exit, but still made their first trip to the postseason in five years.

Now, they are left to reflect on the season as they hold meetings with the front office, which included the addition of free agents Caruso, Lonzo Ball, and DeMar DeRozan.

And of course, the Bulls were hampered by COVID and injuries until the bitter end.

“I don’t know if we got to see our full potential throughout the course of the year, but I think we’re a really good team with really good pieces that I think has a chance to be really special if we can put the work in and get to where we need to get to,” Caruso said.

“Almost all the great teams – they’re built over time. Nothing happens overnight. Nothing happens over a year. It’s very rare,” said Bulls center Nikola Vucevic. “You need to have that continuity. You need to give the teams a chance to go through the ups and downs, the season, playoffs, tough moments, good moments – getting to build that chemistry.”

“I just think the experience for me is huge. Obviously, being 20 in the NBA – it’s a blessing, but it can also be a curse depending on how you look at it, because you don’t really know much,” added Bulls forward Patrick Williams.

Meanwhile, they call it the offseason, but DeRozan has no plans of taking the summer off. He plans on heading home to Southern California, but if you were thinking summer vacation, think again.

DeRozan has a very specific plan, and he’s paving that road with good intentions.

“I plan on having a lot of guys come to LA for sure, work with me, put them through a lot of the hell things that I put myself through the offseason – especially Pat (Williams). You know, I’m looking forward to having him spend some time with me in LA. I’m having him get up at 4 o’clock in the morning – you know, kind of breaking him down – and whoever else wants in on the team. So just starting there,” DeRozan said. “I plan on spending a lot of time with most of these guys – working out, getting ready for next year.”

So what does a “summer in hell” entail besides getting up at 4 a.m.?

“I’ll let them tell you. Give them to the end of the summer and all the guys who go through it with me – they’ll be able to tell a hell of a story,” DeRozan said. “But it’s normal to me.”

Meanwhile, some questions are just beginning with the season over – including what’s going on with point guard Ball’s knee.

After being acquired last summer, Ball helped spark a defensive upswing for the Bulls before surgery to repair a torn meniscus back in January. But Ball never bounced back after, and continues to suffer from lingering knee pain.

Ball ended up playing just 35 games, and yet another knee surgery has not been ruled out.

“I’m kind of at a standstill right now, so I’m supposed to be going meeting with another specialist next week to kind of figure some things out. I kind of let it calm down for the last two weeks – you know, I was going at it pretty hard, you know, trying to get back as fast as possible. But like I said, I’m at a standstill. I still have pain, so I’ve got to get that figured out this summer,” Ball said. “It’s very frustrating. This year, we had a lot of promise, I felt like, and we had a lot of goals that I don’t think were met – mainly due to a lot of health issues. But you can’t change the past. I think everything happens for a reason.”

Gov. J.B. Pritzker on Wednesday signed into law legislation that bans so-called "ghost guns" across Illinois, making it the first Midwest state to do so. House Bill 4383 aims to crack down on "ghost … END_OF_DOCUMENT_TOKEN_TO_BE_REPLACED