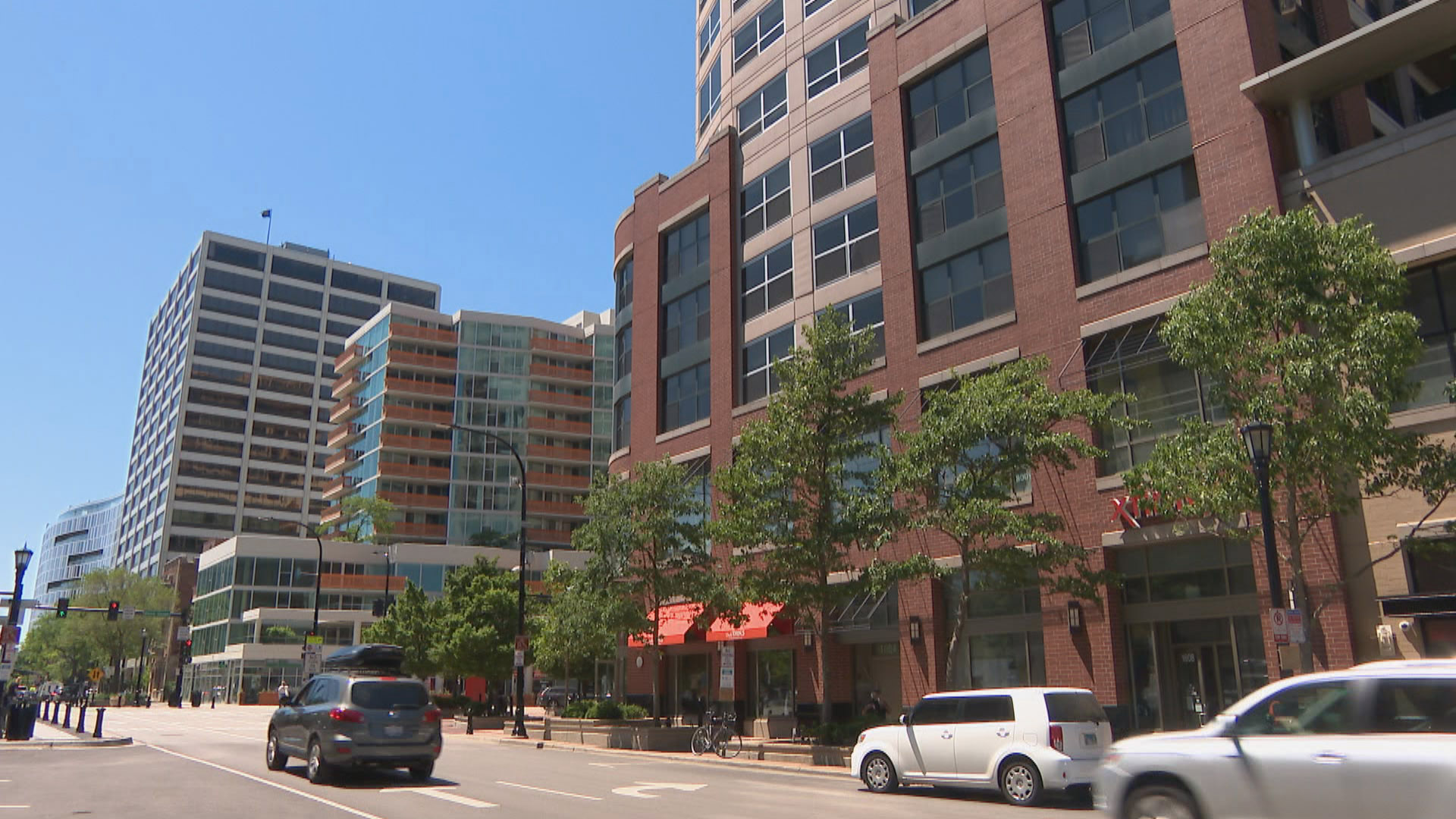 Located along the lakefront just north of Chicago, Evanston is known for its dining scene, arts and culture and Northwestern University.

But it also has a history of racial segregation and redlining, which city leaders hope to address through a historic reparations program that passed in March.

The program starts with distributing $400,000 to eligible Black households. Those who qualify can receive $25,000 for home repairs, interest or late penalties owed to the city, or down payments on property.

Critics say true reparations should come in the form of cash payments.

That’s something the financial mobility nonprofit UpTogether, formerly known as the Family Independence Initiative, is trying to do.

Charrisse Roberson’s family has lived in Evanston for decades. Her grandmother was born in the city in 1906, and Roberson knew she wanted to raise her three children in Evanston.

“It was a small town,” said Roberson, owner of So’Custom Bows & Tiez. “We knew everyone so it was the best choice.”

“I love to see people in my things. That’s the beauty of it. You get to see them wear what you created and they love it,” she said.

However, Roberson said it’s difficult to run a business without a financial buffer — especially during a pandemic.

“‘Oh, well you should be like everybody else, pull yourself up by your bootstraps,’” Roberson said. “I don’t have any bootstraps to pull on!”

Roberson just got her first direct payment from UpTogether, which says it’s giving 40 Black families with ties to Evanston $3,000 over 10 months as a complement to the city’s housing-focused reparations program.

“For people who have money, they may think, ‘Oh, giving somebody $200 or $300 extra a month, that’s nothing,’” Roberson said. “No, it really helped … My sewing machine broke down, I needed to repair it, but I didn’t have the money to repair it.”

UpTogether says its Evanston Equitable Recovery Fund has used up all the money it had for this round, but it’s looking for additional donors and partners to continue putting cash in people’s hands both in Evanston and nationwide.

Direct aid is also a focus of the group Evanston Fight for Black Lives, which has opened the first of four planned community fridges.

“Members of the community can come and put food in and then also take it out for no cost,” said Sarah Bogan of EFBL. “So that people have access to food and there isn’t as much food insecurity here.”

EFBL started last year in the wake of George Floyd’s murder by Derek Chauvin, the former Minneapolis police officer who was found guilty last month of murder and manslaughter.

“We’re not immune to the racial injustices that happen throughout this country,” Bogan said.

The group has organized marches, fundraisers and information sessions about defunding the Evanston Police Department and creating an alternative form of community safety.

“Still making sure that people are safe but making sure that Black and brown people aren’t being traumatized and there would be a variety of roles depending on the call of crisis that they’re getting, so if there’s someone calling with a mental health crisis, it’s someone trained specifically as a psychologist, as a therapist responding to that call rather than an armed officer,” Bogan said.

Public safety is a top issue for Biss.

“On day one I’m going to announce the creation of a special committee to really dig into our police department budget and resources and our city’s approach and philosophy on public safety,” Biss said. “It’s going to be populated by a variety of different stakeholders and activists and nonprofit service providers and policy experts.”

Biss says he hopes the committee will be able to make recommendations in time for the passage of the 2022 budget.

In addition to public safety, Biss will have a number of issues to tackle when he takes office on Monday, including recovery from the pandemic, which is also a priority.

Equity is key in terms of recovery and investment, Biss said.

Equity is also on the mind of Nichole Denise Pinkard, an associate professor at Northwestern’s School of Education and Social Policy who works on an education partnership with District 65 in Evanston. The university worked with the school district to create the website EL3 that helps connect families with resources available nearby.

“We all want to make sure that all kids in communities have access to the resources, the people and the places that are necessary for them to grow into healthy, engaged citizens,” Pinkard said. “I think we often focus on the importance of school. I think schools are critical, but also access to parks, access to out-of-school programming is critical but often that isn’t a big focus of conversation and accessing those resources — oftentimes families are left to their own efforts.”

The platform allows children and families to toggle opportunities by ward or interest area.

“What it really has done is also help communities have a sense of what their opportunities are and then to think about equity and to try to figure out ways to create more equitable programming,” Pinkard said.

She said the partnership helps bring infrastructure into the equity conversation, examining why resources such as buildings, parks and libraries are placed where they are.

“Those decisions are made in a period of time where a society has a particular perspective and so many of our decisions about where we place buildings … was made in the ‘50s, the ‘60s,” Pinkard said. “Let’s look at these decisions and let’s look at the infrastructure and where it is now and say is this, given how we think today, the most equitable distribution and if not, how do we come up with new understanding so allocating resources to be more equitable.”

Out of Space for August

The concert venue SPACE, which opened in 2008, has been mostly empty for the last year.

“We almost immediately started presenting live streaming concerts from artists’ homes,” said Jake Samuels of SPACE. “That was a really great way to still present music most nights of the week.”

As the weather warmed, SPACE offered concerts in people’s backyards, and eventually, for small crowds under a tent next door.

Samuels said it was “incredibly joyous seeing people experience music, seeing musicians perform for people, not a camera or their computer. I’ll remember it forever.”

Samuels says SPACE is eager to get back to business — with indoor shows for small, masked crowds next month, and the return of its Out of Space outdoor concert series in August.

“We’ve been really overwhelmed by the support for SPACE and music venues in general to preserve that web of venues that artists require to tour,” Samuels said.

The outdoor events that buoyed SPACE were also a boon to Diana Hamann who owns the wine bar and shop Wine Goddess.

Last summer, she and neighboring restaurants La Principal and Trattoria D.O.C approached the city of Evanston to ask about setting up outdoor dining on Custer Street.

“To their credit, they said go for it and what do you need,” Hamann said.

“Chicago Tonight” is expanding its community reporting. We’re hitting the streets to speak with your neighbors, local businesses, agencies and leaders about COVID-19, the economy, racial justice, education and more. See where we’ve been and what we’ve learned by using the map below. Or select a community using the drop-down menu. Points in red represent our series COVID-19 Across Chicago; blue marks our series “Chicago Tonight” in Your Neighborhood.

Harmon finally adjourned the Senate with the prediction that a bill ultimately would pass. Environmental advocates and union representatives would meet "as soon as tonight" to continue to try to hash … END_OF_DOCUMENT_TOKEN_TO_BE_REPLACED

Who ever thought that we could transition so quickly from high to low inventory? Of course, there are still houses for sale. For instance, Winnetka currently has 46 listed homes, some of which … END_OF_DOCUMENT_TOKEN_TO_BE_REPLACED