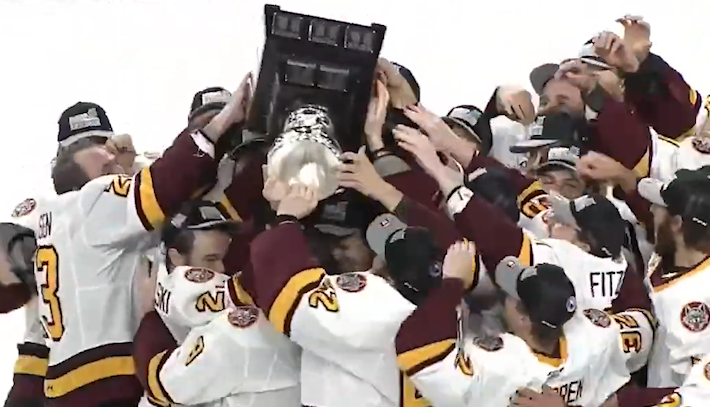 ROSEMONT – Fans in the Chicago area are guaranteed to have at least one banner-raising ceremony for a professional sports championship in the 2022 calendar year.

You can thank the Chicago Wolves for that.

The American Hockey League club captured its first Calder Cup championship in 14 years this past winter, spring, and summer in the finest season for the team since its inception in 1994. They finished with their best regular season record in franchise history then proceeded to go through the playoffs 14-4 to win their fifth franchise title.

Now fans know when they’ll get the chance to see that banner get raised to the rafters at Allstate Arena.

With the release of the full 72-game AHL schedule for the 2022-2023 season, the Wolves announced that they will hold their Calder Cup celebration in their season opener on October 15th in Rosemont against the Milwaukee Admirals at 7 PM.

This is the first time the team has been able to have a ceremony like this since their last title in 2008. They also won the Calder Cup in 2002 while also capturing the Turner Cup in 1998 and 2000 as a member of the International Hockey League.

As they take the ice under head coach Ryan Warsofsky this fall, they’ll be looking to become the first repeat champions in the AHL since the Hershey Bears did so in 2009 and 2010.

During the 2022-2023 campaign, the Wolves will host six Friday night, 15 Saturday night and 10 Sunday afternoon games at Allstate Arena, with two home games opening up the schedule. After the Milwaukee game on October 15th, the team won’t be back on the ice till the following Friday, October 21st against Manitoba.

Advocates staged a tent city in the lobby of City Hall during Mayor Lori Lightfoot's budget address on Monday, Oct. 3, 2022, calling on Chicago to provide a dedicated stream of funding to tackle the … END_OF_DOCUMENT_TOKEN_TO_BE_REPLACED

The candidates face off Dec. 6 in the final Senate contest of the 2022 midterms because neither surpassed 50% of the vote in the general election a little more than two weeks ago, which included a … END_OF_DOCUMENT_TOKEN_TO_BE_REPLACED