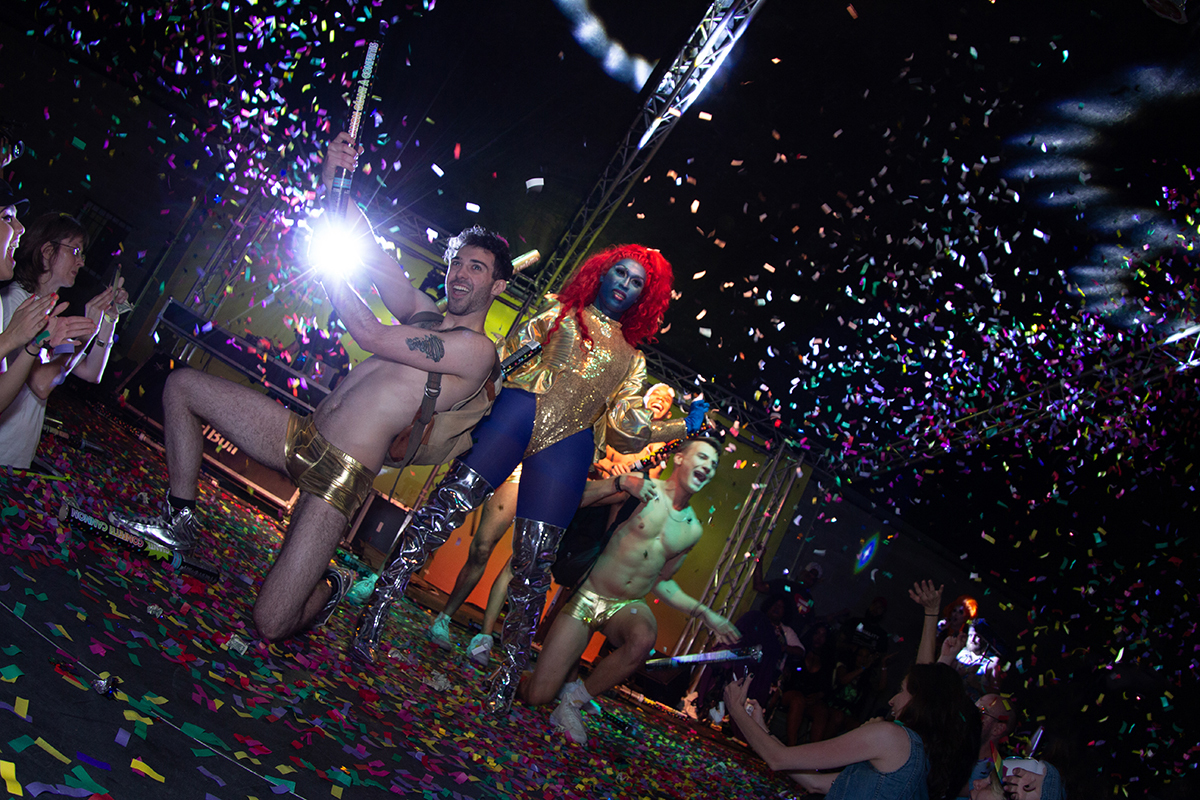 In the summer in Chicago, you can find festivals celebrating just about everything, including the best of the city’s food, music, craft beer and culture. So it was only a matter of time before Chicago debuted a festival showcasing one of its best cultural assets—its rich, diverse and exciting drag scene.

On June 24, the Cheetah Gym lot in Andersonville will play home to the third edition of Chicago is a Drag, the Midwest’s first drag fest. The festival is organized by A Queer Pride, the queer event collective of local performers Abhijeet, Bambi Banks-Couleé, JForPay and Kitty Banks.

The original event, held in 2019, emerged out of programming for another popular Pride event in Andersonville, Backlot Bash. When asked to program the Friday of the festival, the idea for an all-drag event was born.

“There was nothing in Chicago that highlighted the drag artists of Chicago by themselves, as themselves,” Abhijeet says.

To have this close out Pride month, we’re keeping an important tradition alive—celebrating in June and bringing all our friends together.

In 2020, following the COVID-19 pandemic, the organizers pivoted to hosting the festival digitally. This year, the team is focused on celebrating local talent, including uplifting established names from Chicago’s pageant scene and up-and-coming performers.

“We’re leaning into how the community has evolved since then and bringing in the people who are leading the charge, and newcomers who are freshly under one year in being in the community and giving them a full platform,” Abhijeet says.

On the heels of the positive reception of the first two events, interest and initiative in Chicago is a Drag has only grown. For the first two events, Abhijeet and A Queer Pride collective curated the lineup, but this year, they were able to open applications to welcome more new performers. More than 100 applicants applied for 40 spots at the event.

“It was very difficult but the cast that we’ve landed with hits the right spots,” JForPay says. “We have so many different people, representing so many different neighborhoods. It’s so exciting to be the people putting a spotlight on Chicago drag as a whole.”

Abhijeet describes the lineup as a “buffet of Chicago drag,” where attendees will be able to sample every facet of the Chicago drag scene, from the Drag Race heavy-hitters to pageant titles to performers who use live music and burlesque in their acts, as well as performers whose drag is more politically aligned or “pushing the scene forward.”

“In Chicago, we have a really amazing drag scene here because it really celebrates diverse points of view,” JForPay says. “We have some of the best drag kings in the world, like Tenderoni, but also a lot of amazing alternative performers that do darker or weirder drag and this amazing pageant tradition in Chicago centered around the Continental pageants. We have amazing trans performers. It’s such a wonderful place to begin drag and have long, amazing careers in drag.”

And this year’s lineup is a powerhouse celebration of local talent, with 40 performers spanning different styles and genres. Even the headliners who have gained international fame by appearing on RuPaul’s Drag Race—figure skating ice queen Denali and the glamorous Kahmora Hall—are Chicago queens. Celebrity out-of-town guests include Miami-based entertainer Fantasia Gaga Royale, the first winner of the OUTtv show HotHaus. And ahead of a pivotal primary election, guest hosts include Precious Brady-Davis, an author and advocate running for a commissioner seat on ​​the Metropolitan Water Reclamation District of Greater Chicago.

“To have this to close out Pride month, we’re keeping an important tradition alive—celebrating in June and bringing all our friends together,” JForPay says. “I think it’s really beautiful and important.”

Chicago is a Drag 2022 takes place Friday, June 24 from 4–10pm at the lot behind Cheetah Gym Andersonville (5248 N Clark St). Proof of vaccination and masks are required for entry, and organizers encourage guests to mask up for the duration of the event. Tickets range from $20–40, and the most current ticketing, lineup and other information can be found at chicagoisadrag.com.

Advocates staged a tent city in the lobby of City Hall during Mayor Lori Lightfoot's budget address on Monday, Oct. 3, 2022, calling on Chicago to provide a dedicated stream of funding to tackle the … END_OF_DOCUMENT_TOKEN_TO_BE_REPLACED

The candidates face off Dec. 6 in the final Senate contest of the 2022 midterms because neither surpassed 50% of the vote in the general election a little more than two weeks ago, which included a … END_OF_DOCUMENT_TOKEN_TO_BE_REPLACED