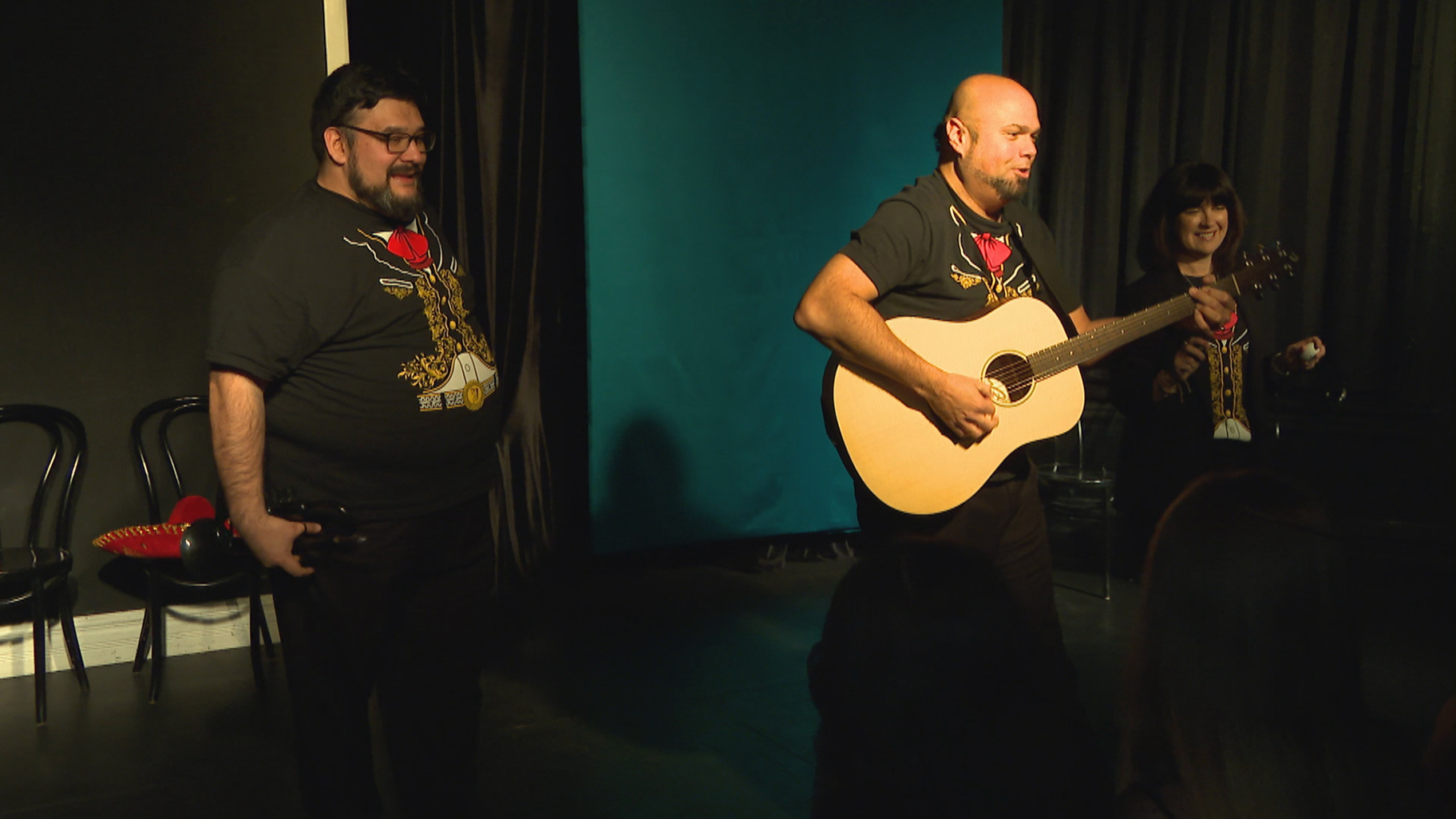 The members of Los Improviachis will be the first to tell you they’re not traditional mariachis.

“We’re comedians first and foremost, but we have a respect for mariachi, it’s a very serious art form,” said Nelson Velazquez, who founded the comedy trio. “It’s paying homage to things that come from mariachi or Mexican culture, but ultimately we throw it on its head.”

They’ll also admit to being not particularly good musicians.

“People are probably expecting these guys have sombreros, they have the attire, ‘these guys are going to sound great!’ and then I get on my horn and then it’s a B flat all the way,” said trumpeter Steven Sanabria.

But for their brand of improv comedy, it’s all part of the plan.

“Improvising the music provides an opportunity, that lower-level barrier to entry, where you can just go for it and have a good time,” said Megan Powell, whose maraca stylings round out the trio.

“It was born out of Salsation Theater Company, which is the longest running sketch comedy Latino theater company in Chicago. I wanted to put together a show that not only celebrated Mexican culture, Latino culture, but also had just a ton of fun with it.”

Sanabria said they have an arsenal of cultural touchpoints at the ready to poke gentle fun at Latino stereotypes.

“We got our Vicks VapoRub jokes, your 7-Up ‘eSprite’, our sexual appetite, you know the being the Latin lover, stuff like that,” Sanabria said.

“We may do a verse of ‘El Rey’ and we may pay homage by doing the traditional Spanish verse of it,” added Velazquez. “And then the second verse is completely in English and improvised, right on the spot based on what they’re given, right? We’re kind of ambassadors, we kind of are the ‘intro to the intro’ class that you would take at a community college on Latino culture.”

They say their act adds variety and relatability to what is often a white-dominated space.

“There’s not a lot of Spanish improv or comedy, especially on the north side of Chicago, that you’re going to see,” said Velazquez. “If you go to different stages across the city, I’m sure you’re not going to see a lot of our faces, right?” said Sanabria. “We bring a little understanding of the culture and how that is and how that plays a part in not only comedy, but everyday life, you know?”

But like any other comedy show, they say their primary mission is to make ‘em laugh – even when the results can be unpredictable.

“There’s a bit of reading the room, especially in the situations like, ‘oh are you two together? Oh, you’re not?’” said Powell. “There might be something that if Nelson asked that question that he noticed — body language or how they were sitting.”

“We’ve been doing this for 10 years, we’ve made some love connections!” said Velazquez. “We probably ruined a few marriages here and there, but hey, that’s collateral damage when you’re doing comedy. That’s the way we look at it.”

SENECA, Ill. — 15 people were injured in a boat fire in Seneca on Saturday afternoon, with one person suffering serious injuries, police said. According to Illinois State Police, troopers responded … END_OF_DOCUMENT_TOKEN_TO_BE_REPLACED

Vallas was CEO of Chicago Public Schools from 1995 to 2001 and served as city budget director under former Mayor Richard M. Daley. More recently, he worked as an unpaid consultant to the Fraternal … END_OF_DOCUMENT_TOKEN_TO_BE_REPLACED

As we continue our look at the candidates running for office this summer, we’re turning our eye toward Illinois’ 2nd Congressional District, where incumbent Rep. Robin Kelly is hoping to be elected to … END_OF_DOCUMENT_TOKEN_TO_BE_REPLACED