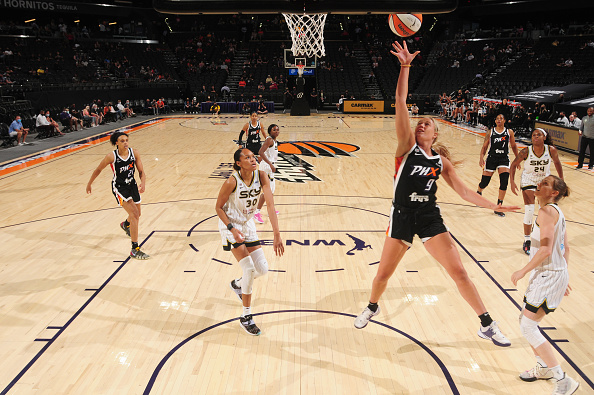 PHOENIX – It’s been a rough start for the team when it comes to injuries and absences during the early part of the 2021 season.

But, at last, the Chicago Sky got some great news before their game against the Mercury on Thursday.

Allie Quigley played in her first game of the season after struggling with hamstring issues since May and forward Stefanie Dolson returned after helping the US 3-on-3 national team qualify for the summer Olympic games in Tokyo.

Dolson’s 15 points in 12 minutes as a starter and Quigley’s eight in 19 minutes off the bench, including a three-pointer to put the Sky up by 13, looked to put the team on track to finally snap a five-game losing streak.

But, again, it wasn’t enough.

Behind Skylar Diggins-Smith, Phoenix rallied to tie the game in regulation then won 77-74 in overtime as Courtney Vandersloot missed a potential game-tying three-pointer in the final seconds.

The loss drops the Sky to 2-6 on the season as they remain out west to face the Sparks on Sunday in Los Angeles. They’ve lost both games to the Western Conference foe this season and it’s unclear if Candace Parker will play as she continues to heal an ankle injury that’s kept her out of the last seven games.

Head coach James Wade is continuing to keep the faith in his group that was predicted before the season to be a contender for the WNBA championship.

“We have to keep our head up and continue to believe,” said James Wade of the team moving forward after another loss. “It’s just a rough patch we’re going through, but we’ll be fine, we’ll be fine.”

At least they have plenty of games to fix their recent woes with more starters returning as the season continues.

CHICAGO — The City Council on Monday delayed a vote on Mayor Lightfoot’s curfew change — but a group of young residents are urging members to vote no. The young adults are part of the racial … END_OF_DOCUMENT_TOKEN_TO_BE_REPLACED

The fire at the former Pheasant Run Resort, 4051 E. Main St., broke out Saturday afternoon, sending huge plumes of smoke into the sky surrounding the closed resort and drawing dozens of onlookers who … END_OF_DOCUMENT_TOKEN_TO_BE_REPLACED

As the 2022 political season gets into full swing, one of the most intriguing candidates for elected office is Herschel Walker. The star running back with the University of Georgia and Dallas Cowboys … END_OF_DOCUMENT_TOKEN_TO_BE_REPLACED