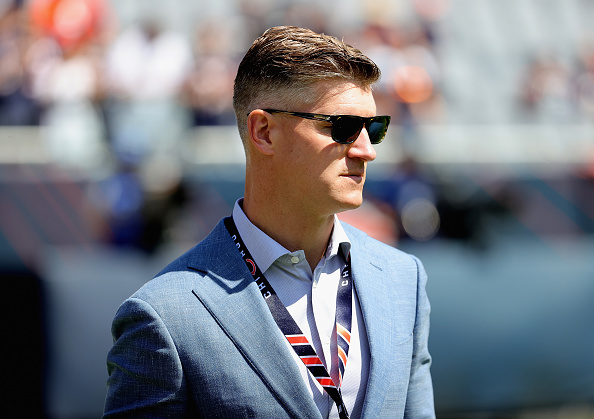 ATLANTA – A month-and-a-half after his tenure in Chicago came to a close, Ryan Pace has found a new job in the National Football League.

The former Bears general manager is joining the front office staff of the Falcons as he will be a senior personnel executive in the team’s scouting department. In the process he’ll be joining someone he knows very well along with someone who used to hold the same position with the Bears.

Pace will be working with general manager Terry Fontenot, with whom he has a connection from his days with the Saints. The duo worked together for 13 of Pace’s 15 years in New Orleans before he would take the Bears’ general manager job in January of 2015.

Fontenot worked as a Saints scout and then eventually the team’s director of pro scouting from 2013-2020 before taking the general manager job in Atlanta.

One of those people that Pace will be working with in Atlanta is Phil Emery, who was the Bears’ general manager from 2012-2014 before he was fired along with head coach Marc Trestman after a 5-11 season. Pace would succeed Emery as the general manager of the Bears shortly after that and held the position through this January.

On the job for seven seasons, Pace enjoyed just one playoff season while with the Bears in 2018 when he was named Executive of the Year in the NFL. But a number of questionable moves both in the draft and in free agency led to a downfall after the one playoff season and his dismissal after a 6-11 campaign in 2021.

WAUCONDA, Ill. (AP) — A bison that escaped a suburban Chicago farm last September and had been living in the wild since was recaptured Wednesday, officials said. The 1,300-pound bison some had come … END_OF_DOCUMENT_TOKEN_TO_BE_REPLACED

With suburban home value growth surpassing that of urban homes, the most popular areas appear to be outside the city. According to Zillow, all 10 of its current top markets are located roughly 30 … END_OF_DOCUMENT_TOKEN_TO_BE_REPLACED

The measure passed 30-19. After the first meeting adjourned, the City Council briefly met for a second time during a special meeting called for by 30 aldermen to grill city leaders about Chicago’s … END_OF_DOCUMENT_TOKEN_TO_BE_REPLACED