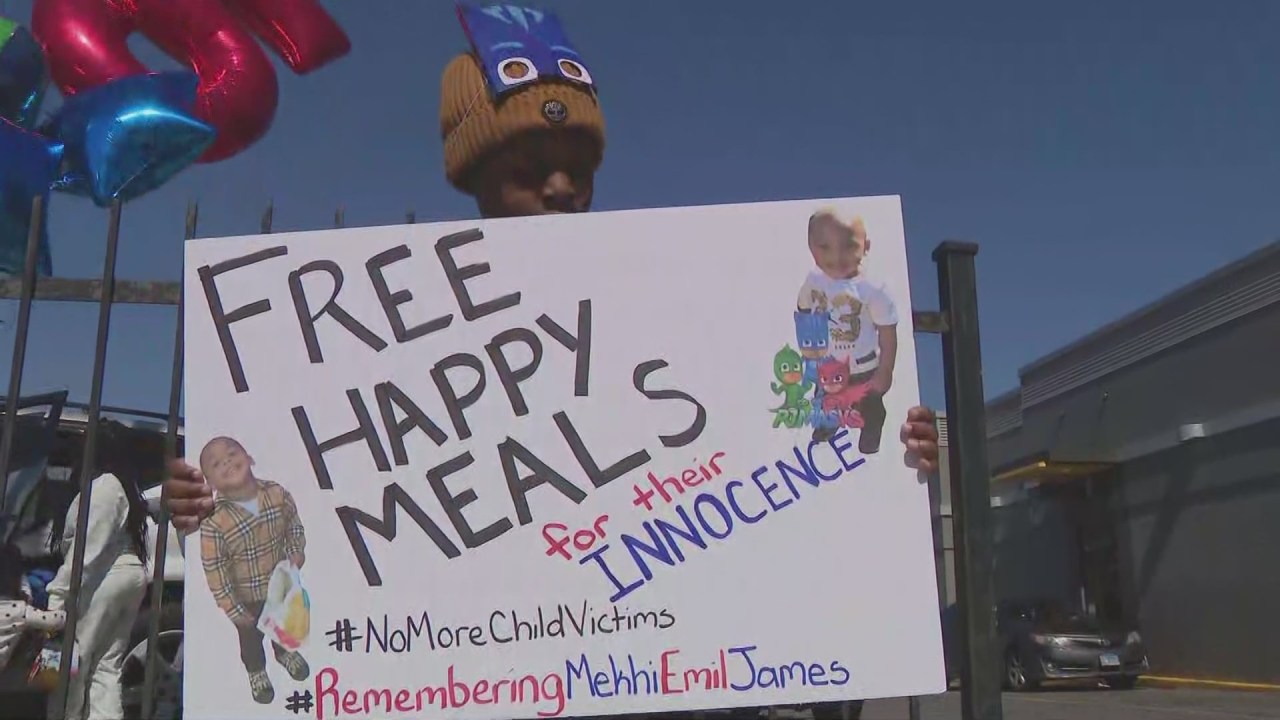 CHICAGO — Monday would have been Mekhi Emil James’ fifth birthday. However, instead of celebrating, his family helped give out 1,000 free Happy Meals in honor of the boy’s life that was cut short when he was shot and killed in the city’s Austin neighborhood.

At two McDonald’s locations Sunday afternoon, organizers from the James-Gail Foundation gave out coupons for free Happy Meals in honor of five children who have been shot and killed since 2015.

Event organizer Nicole McGee said Sunday’s giveaway was about more than just a free meal. It was symbolic of something small and innocent that children like Mekhi should have been able to enjoy. A McDonald’s Happy Meal was Mekhi’s favorite.

“We’re just finding ways to keep his name alive because he’s more than what happened on June 20,” she said.

Two years ago in June, Mekhi was riding in the backseat of his dad’s car on the 600 block of North Central Avenue when someone in a blue Honda fired shots into their vehicle.

Police said his father was believed to be the intended target and suffered a graze wound to the abdomen. Mekhi was shot and killed.

The gunman is still out there.

The gunman that took the life of 4-year-old Mychal MJ Moultry Jr. last year is also still out there.

“You come and you visit the City of Chicago with your kid and then you leave with him in a casket, it’s terrifying, you know?” his mother Angela Gregg said.

MJ was in town visiting his dad, getting his hair braided when someone drove by and fired 27 bullets into a window. Two of them hit MJ.

“I have nothing else to live for now,” Gregg said. “He was my only child, my only son. My days are spent doing events like this just to give me purpose because my purpose was my child.”

Video released of suspect in homicide of 12-year-old girl

Jaslyn “Pinky” Adams, 7, was shot to death while sitting in her father’s car outside of a McDonald’s at the intersection of Kedzie Avenue and Roosevelt Road on April 18, 2021.

She is now featured in a coloring book to honor young victims like 7-year-old Natalia Natalie Wallace who was gunned down on the Fourth of July in 2020 outside her grandparent’s house.

Whether a Happy Meal or a page in a coloing book, it’s really just a chance for kids to talk about their feelings and process the violence they see.

The 14-year-old boy inside the costume was recently a pallbearer at a friend’s funeral.

“Change the gun laws,” Candiace McGee, Mekhi’s aunt, said. “They’re not strict enough. People go to jail every day here and they ride back on the streets the next night doing the same thing or worse. Change the laws.”

These moms say it’s not just about their pain but about proactive solutions. They want a state taskforce to investigate child murders and harsher punishments written into state laws for shooters who accidentally kill kids.

CHICAGO (CBS) -- Chicago Police are looking for a man who tried to kidnap a woman in the city's West Loop but was thwarted by some good Samaritans. This is at least the second time this has happened … END_OF_DOCUMENT_TOKEN_TO_BE_REPLACED

Illinois homes sold somewhat faster in August 2022 than in the year prior, even as median prices rose statewide, according to new data from Illinois REALTORS®. Though statewide home sales were down … END_OF_DOCUMENT_TOKEN_TO_BE_REPLACED

“I’m not one to really tell people what to do,” said Kennedy, 35, who lives in Milwaukee and works in software sales. But if a friend tried to order a delta-8 drink, “I would tell them, ‘Absolutely … END_OF_DOCUMENT_TOKEN_TO_BE_REPLACED