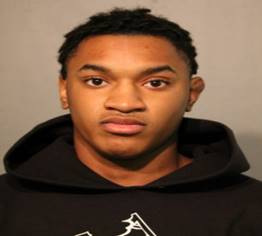 Authorities say around 5:45 a.m. Saturday, troopers located a stolen vehicle carjacked earlier in Chicago. As troopers attempted to conduct a traffic stop, the suspect vehicle in the area of Interstate 94 northbound near 33rd Street, the car sped off.

Troopers pursued the vehicle, eventually forcing the car to come to an abrupt stop at Tilden and Aberdeen Street.

Police said six people, three of which were juveniles, were taken into custody.

Troopers also recovered one firearm from the scene.

Noah T, Ransom, 18, of Chicago, is charged with aggravated vehicular hijacking, unlawful possession of a stolen motor vehicle, aggravated fleeing and eluding, and unlawful use of a weapon.

Man critically injured after being shot at, hit by car in Portage Park

Authorities also charged Dallas A. Johns Jr. and Vernon Gipsobn, both 18, with criminal trespass to a vehicle.

Authorities screened three 17-year-old passengers for charges equivalent to criminal trespass to a vehicle before being released to their guardians.

U.S. new-home sales plunged in April as continued increases in home prices and interest rates priced out many would-be homebuyers.  The rate of new single-family home sales fell 16.6% from … END_OF_DOCUMENT_TOKEN_TO_BE_REPLACED

Countywide salaries for Cook County officials had not been adjusted since 2000, according to the ordinance approved Tuesday. The one-year elevation amounts to a $17,000 increase for Cook County Board … END_OF_DOCUMENT_TOKEN_TO_BE_REPLACED