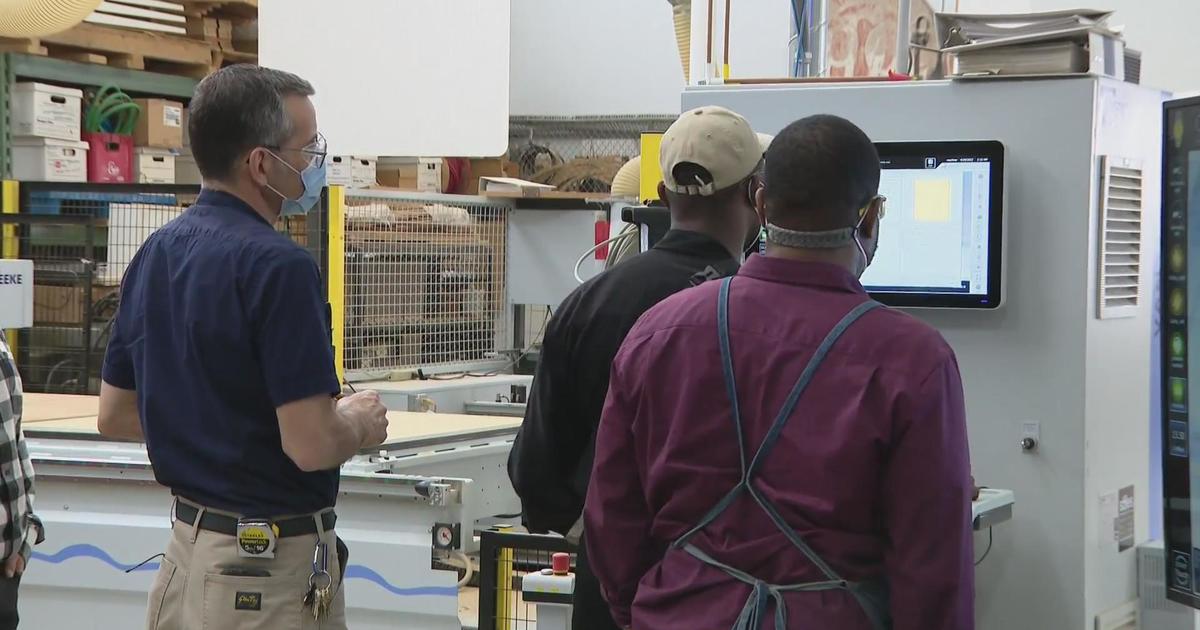 CHICAGO (CBS) — Musical instruments, furniture, exquisite millwork in a building’s lobby: Talented men and women make all this out of wood — It takes skill and training.

CBS 2’s Jim Williams reports on a training program in Chicago that has been giving young people the tools to do this work for the past 30 years.

This training has a quick payoff. What these students learn in this workshop and what they’ll soon produce they can share with family and friends.

“It’s so satisfying that I was able to bring home to show people – ‘Hey I made this within five weeks.'”

Darlene Moyeno and her fellow students are in the Woodworkers Training Program offered by the Greater West Town Community Development Project. Here, in Humboldt Park, they’re preparing for a lifetime of employment by using their hands and mastering this equipment.

Doug Rappe has been an instructor here for 30 years. He says his students will find their services and creativity are in demand at a variety of companies that make wood products.

“Furniture makers, musical instrument manufacturers, architectural millworker companies — they are doing often high visibility work — where they can point to a lobby downtown and say, ‘Hey I worked on that millwork or a beautiful musical instrument in a catalog or on a stage somewhere,” Rappe said.

Darlene once worked in the financial industry and wanted a career change. Others, though, have had little to no job experience.

“A lot of applicants to our program have barriers to employment,” she said.

Executive director Keisha Davis-Johnson tells us some trainees have been homeless — others were once incarcerated.

“People come in to learn a skill, but ultimately walk away with better self-esteem,” Davis-Johnson said. “If a person can earn wages, if they feel like they are positive contributors to society, it speaks to a larger picture in terms of just their growth.”

Nathan: You can’t just throw it in the machine and out comes a cabinet. You have to do a lot of thinking ahead.

Nathan: Yeah, it is. It’s satisfying.

“At the end of the day, you can see the physical results of what you’ve done,” Rappe said.

“After the first month, it really started settling in. I really started feeling confident, excited, like you know what, I see all the different paths I can take,” Moyeno said.

The pay for new woodworkers is between $15 and $20 an hour. For more information on the training program visit the Greater West Town Wood Workers website.

Jim Williams, a native Chicagoan, is a general assignment reporter for CBS2. He also anchors the station’s weekend evening newscasts, and he is the producer/host of the documentary series “Stories 2 Tell.”

SENECA, Ill. — 15 people were injured in a boat fire in Seneca on Saturday afternoon, with one person suffering serious injuries, police said. According to Illinois State Police, troopers responded … END_OF_DOCUMENT_TOKEN_TO_BE_REPLACED

Vallas was CEO of Chicago Public Schools from 1995 to 2001 and served as city budget director under former Mayor Richard M. Daley. More recently, he worked as an unpaid consultant to the Fraternal … END_OF_DOCUMENT_TOKEN_TO_BE_REPLACED

As we continue our look at the candidates running for office this summer, we’re turning our eye toward Illinois’ 2nd Congressional District, where incumbent Rep. Robin Kelly is hoping to be elected to … END_OF_DOCUMENT_TOKEN_TO_BE_REPLACED