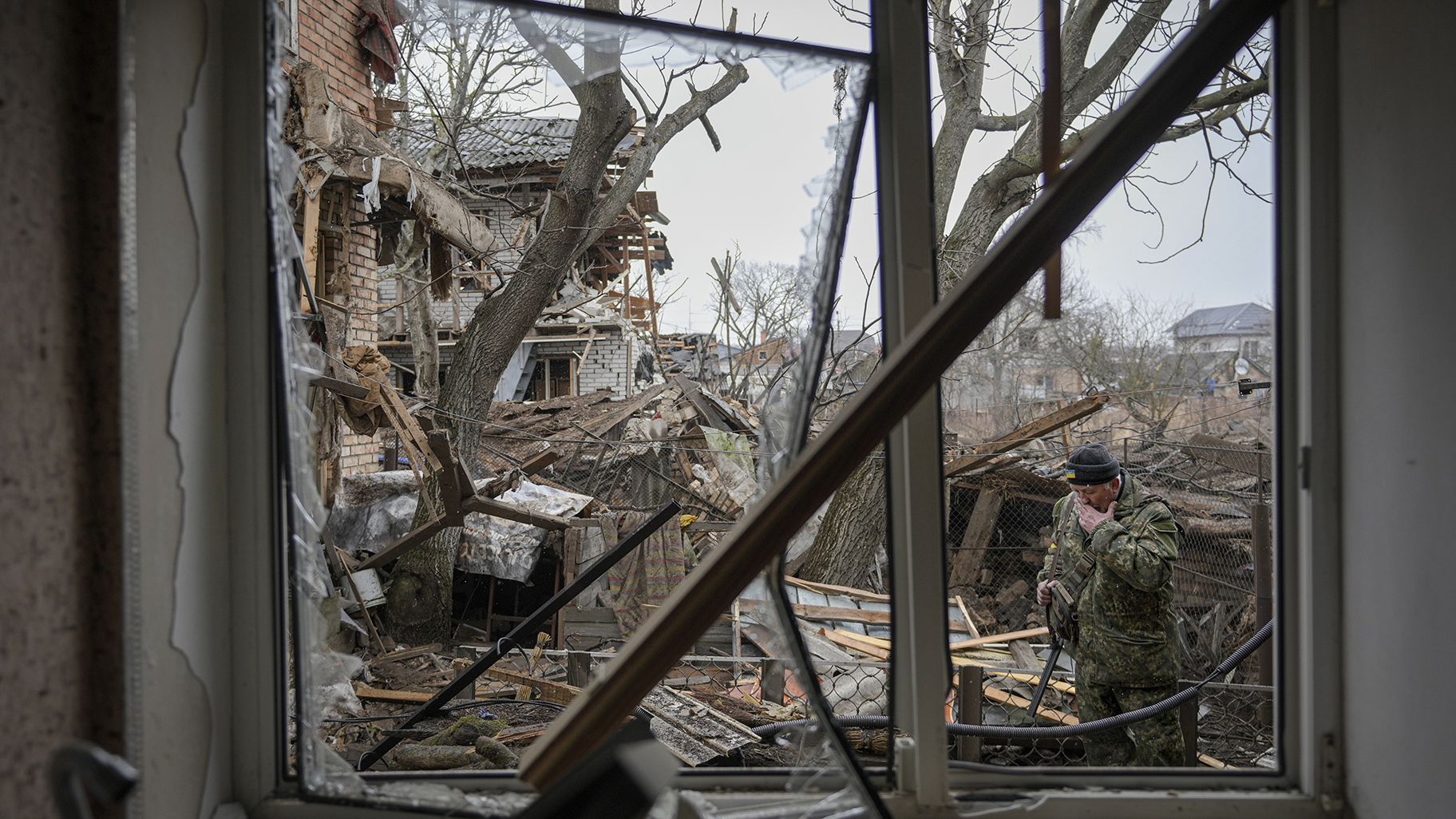 Andrey Goncharuk, 68, a member of territorial defense wipes his face in the backyard of a house that was damaged by a Russian airstrike, according to locals, in Gorenka, outside the capital Kyiv, Ukraine, Wednesday, March 2, 2022. (AP Photo / Vadim Ghirda)


KYIV, Ukraine (AP) — Most of the world lined up against Moscow in the United Nations on Wednesday to demand it withdraw from Ukraine, as Russian forces renewed their bombardment of the country’s second-biggest city and besieged its strategic ports.

Russia reported its military casualties for the first time since the invasion began last week, saying nearly 500 of its troops had been killed and almost 1,600 wounded. Ukraine insisted Russia’s losses were far higher but did not immediately disclose its own casualties.

The U.N. General Assembly voted to demand that Russia stop its offensive and immediately withdraw all troops, with world powers and tiny island states alike condemning Moscow. The vote was 141 to 5, with 35 abstentions. It came after the 193-member assembly convened its first emergency session since 1997.

Countries that spoke up for Russia included Belarus, Cuba, North Korea and Syria.

Assembly resolutions aren’t legally binding, but they do have clout in reflecting international opinion.

Meanwhile, Russia pounded Kharkiv, Ukraine’s second-largest city with about 1.5 million people, with another round of aerial attacks that shattered buildings and lit up the skyline with balls of fire. At least 21 people were killed and 112 injured over the past day, said Oleg Sinehubov, head of the Kharkiv regional administration.

Arestovich said several Russian planes were shot down over Kharkiv, though that could not be confirmed.

“Kharkiv today is the Stalingrad of the 21st century,” said Oleksiy Arestovich, a top presidential adviser, invoking what is considered one of the most heroic moments in Russian history, the five-month defense of the city from the Nazis during World War II.

But both sides said they were also ready to resume talks aimed at stopping the fighting, which had Ukraine under threat on multiple fronts. A huge, 40-mile-long column of Russian tanks and other military vehicles stood outside the capital, and Russian invaders pressed their assault on the strategic port cities of Kherson and Mariupol.

Russian attacks, many with missiles, blew the roof off Kharkiv’s five-story regional police building and set the top floor on fire, and also hit the intelligence headquarters and a university building, according to officials and videos and photos released by Ukraine’s State Emergency Service. Officials residential buildings were also hit, but did not provide details.

Seven days into Russia’s invasion, a refugee crisis unfolded on the European continent, with the United Nations saying that more than 870,000 people have fled Ukraine and that the number could soon hit 1 million.

The State Emergency Service reported that more than 2,000 civilians have been killed, but that could not immediately be independently verified, and neither side has disclosed its military casualties.

A spokesman for the Russian Defense Ministry, Maj. Gen. Igor Konashenkov, gave his side’s casualty figures, rejecting reports about “incalculable losses” of the Russians as “disinformation.”

The two sides held talks Monday, agreeing only to keep talking. It was not immediately clear when new talks might take place or what they would yield. Zelenskyy said Tuesday that Russia should stop bombing before another meeting.

Russia, meanwhile, ramped up its rhetoric, with Foreign Minister Sergei Lavrov reminding the world about the country’s vast nuclear arsenal. In an interview with Al-Jazeera, he said: “A third world war will be nuclear, and devastating,” according to Russian news sites.

In the northern city of Chernihiv, two cruise missiles hit a hospital, according to the Ukrainian UNIAN news agency, which quoted the health administration chief, Serhiy Pivovar, as saying authorities were working to determine the casualty toll.

In besieged Mariupol, at least one teenager died and two more were wounded by apparent Russian shelling.

The three boys were rushed to a regional hospital. One had lost his legs in the attack and died soon after arriving, according to an Associated Press reporter at the scene. Family members told the AP the three had been playing soccer near a school when the shelling hit.

The attacks came a day after Russia, intensifying its attacks on cities, bombed Kharkiv’s central square — where at least six people were reported killed — and struck Kyiv’s main TV tower, where authorities said five died. Kyiv’s nearby Babi Yar Holocaust memorial also came under fire, but the main monument was not damaged.

Even as Russia’s invasion continued on multiple fronts, Kremlin spokesman Dmitry Peskov said that a delegation would be ready later in the day to meet Ukrainian officials.

Ukrainian Foreign Minister Dmytro Kuleba also said his country was ready but noted that Russia’s demands have not changed and that he wouldn’t accept any ultimatums. Neither side said where the talks might take place.

— Russia found itself even more isolated economically as Airbus and Boeing said they would cut off spare parts and technical support to the country’s airlines, a major blow. Airbus and Boeing jets account for the vast majority or Russia’s passenger fleet. Dozens of multinational companies have curtailed or stopped doing business in Russia.

Peskov, the Kremlin spokesman, acknowledged the global economic punishment hitting Russia is unprecedented but said that Moscow had been prepared for all manner of sanctions and that the potential damage had been taken into account before launching the invasion.

“We have experience with this. We have been through several crises,” he said.

Britain’s Defense Ministry said Kharkiv and Mariupol were encircled. A third city, Kherson, was under pressure, but there were conflicting reports as to who was in control.

Mariupol Mayor Vadym Boychenko said the attacks there had been relentless.

“We cannot even take the wounded from the streets, from houses and apartments today, since the shelling does not stop,” he was quoted by the Interfax news agency as saying.

On the far edges of Kyiv, volunteer fighters well into their 60s manned a checkpoint to block the Russian advance.

“In my old age I had to take up arms,” said Andrey Goncharuk, 68. He said the fighters needed more weapons, but “we’ll kill the enemy and take their weapons.”

“When there is a conflict ongoing, there is of course a risk of attack or the possibility of an accidental hit,” Rafael Mariano Grossi, director-general of the International Atomic Energy Agency, said in Vienna.

Russia already seized control of the decommissioned Chernobyl power plant, the scene in 1986 of the world’s worst nuclear disaster.

CHICAGO (CBS) -- Chicago Police are looking for a man who tried to kidnap a woman in the city's West Loop but was thwarted by some good Samaritans. This is at least the second time this has happened … END_OF_DOCUMENT_TOKEN_TO_BE_REPLACED

Illinois homes sold somewhat faster in August 2022 than in the year prior, even as median prices rose statewide, according to new data from Illinois REALTORS®. Though statewide home sales were down … END_OF_DOCUMENT_TOKEN_TO_BE_REPLACED

“I’m not one to really tell people what to do,” said Kennedy, 35, who lives in Milwaukee and works in software sales. But if a friend tried to order a delta-8 drink, “I would tell them, ‘Absolutely … END_OF_DOCUMENT_TOKEN_TO_BE_REPLACED