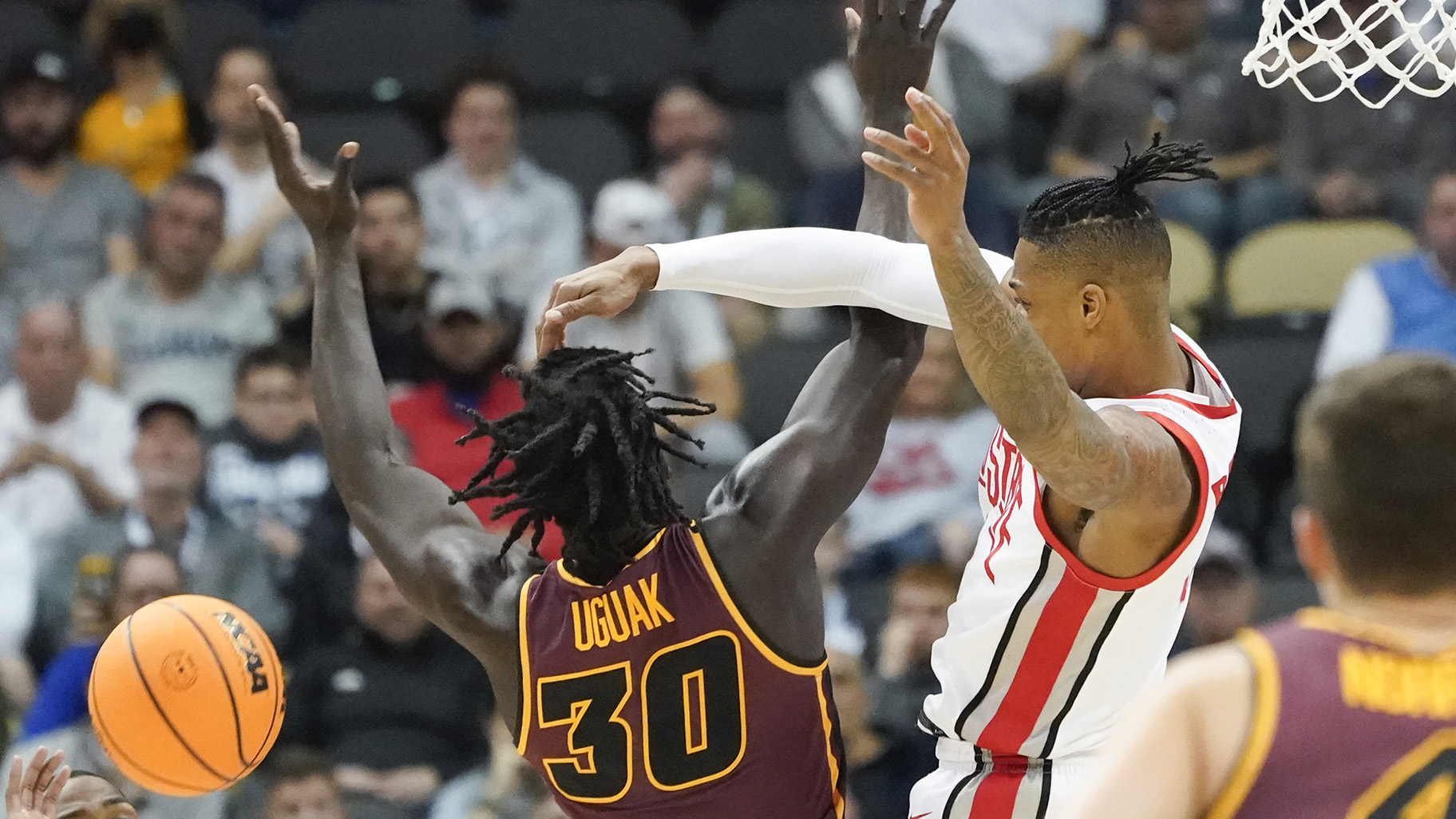 Ohio State’s Eugene Brown III, right, blocks a shot by Loyola of Chicago’s Aher Uguak (30) during the first half of a college basketball game in the first round of the NCAA tournament, Friday, March 18, 2022, in Pittsburgh. (AP Photo / Keith Srakocic)


PITTSBURGH (AP) — E.J. Liddell scored 16 points, Big Ten Freshman of the Year Malaki Branham added 14 and seventh-seeded Ohio State shut down 10th-seeded Loyola Chicago from start to finish, winning 54-41 in the first round of the NCAA Tournament on Friday.

The Buckeyes (20-11) advanced to play either Villanova or Delaware on Sunday in the South Region while preventing another March run by the Ramblers (25-8), who shot 27% (15 of 56) from the floor.

Braden Norris led Loyola with 14 points but star Lucas Williamson endured perhaps his worst game of the season. The winningest player in program history finished with four points on 1-of-10 shooting and committed three turnovers as Loyola fell in the first round after reaching the Sweet 16 last season and the Final Four in 2018.

Sister Jean, Loyola’s 102-year-old chaplain, led the Ramblers in a pregame prayer and took in the school’s third NCAA appearance in five years from the mezzanine but could only watch as Loyola — listed as a slight favorite by FanDuel Sportsbook, a nod to the program’s rise — fumbled away an opportunity to further cement its status as a mid-major power.

Ohio State came in having lost four of its final five games, including a baffling setback to lowly Penn State in the Big Ten tournament last week. The return of forward Kyle Young — who hadn’t played since March 8 due to a concussion — and Liddell’s steadiness helped the Buckeyes avoid a second straight early exit.

A year ago, Ohio State came in as a two seed only to get stunned by 15th-seeded Oral Roberts in the opening round. Not this time.

Loyola reached its third NCAA Tournament in five seasons based largely on its defense. The problem for the Ramblers, however, came on the other end of the floor.

While Williamson and company frustrated Liddell — holding him without a field goal in the first half — Loyola could muster little offensive flow as the Buckeyes swallowed up the lane in a game that made up for in intensity what it lacked in aesthetics.

Every Loyola dive to the rim was contested and every loose ball — and there were plenty in an opening half in which both teams combined for as many turnovers as made baskets (15) — seemed to end with Ohio State heading the other way.

At one point, first-year Loyola coach Drew Valentine grew so animated his gum flew out of his mouth as he implored his team for more effort.

The Ramblers’ effort wasn’t the issue. Execution, however, was another matter as Loyola ended its stint in the Missouri Valley Conference — the Jesuit school located along Lake Michigan is heading to the Atlantic 10 next fall — with a thud.

Gov. J.B. Pritzker on Wednesday signed into law legislation that bans so-called "ghost guns" across Illinois, making it the first Midwest state to do so. House Bill 4383 aims to crack down on "ghost … END_OF_DOCUMENT_TOKEN_TO_BE_REPLACED