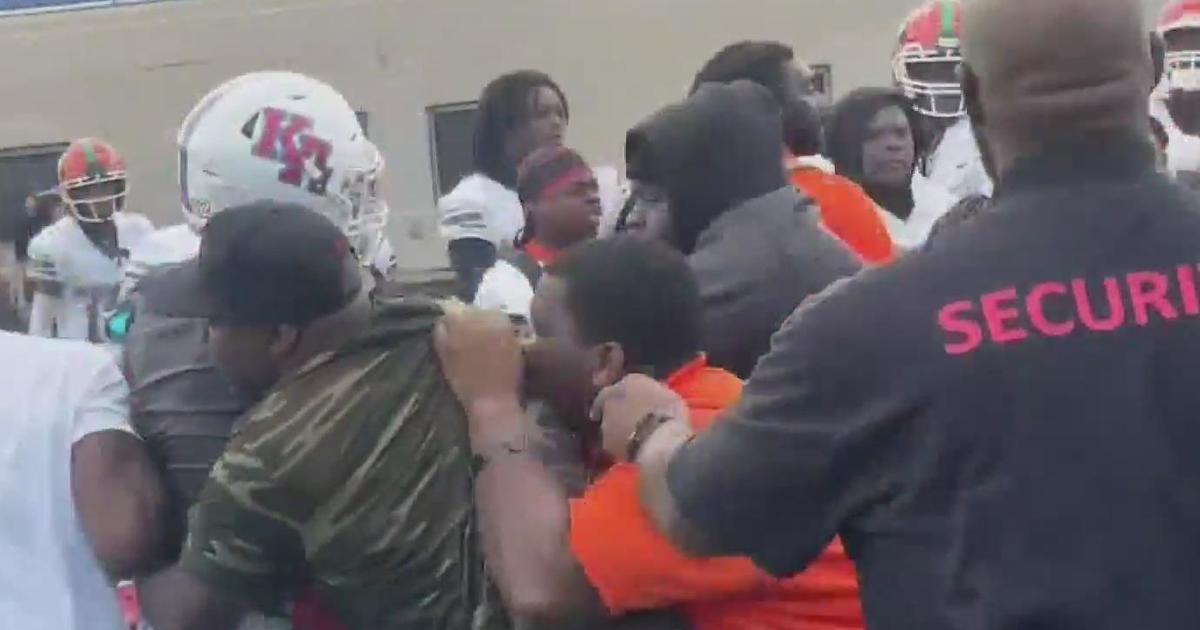 CHICAGO (CBS) – Chicago Public Schools and the Illinois High School Association are sorting out a brawl between two of Chicago’s top high school football teams over the weekend.

It was the culmination of an ugly game in which several players and coaches were ejected for unsportsmanlike conduct.

As CBS 2’s Charlie De Mar reported, coaches from both teams came out quickly and took responsibility for the incident – and even apologized.

The matchup was supposed to be one of the best games all season. But now, of course, the game is being remembered for all the wrong reasons.

Punches flew and tempers flared as that final whistle blew. Several fights sparked across the field.

“They are trying to build a brand-new brand for the Chicago Public League, and unfortunately, you know, some things got out of hand,” said student athlete advocate Joe Trost, “and that’s not what you want with a new brand.”

Trost said what happened Saturday is not isolated to Chicago Public Schools.

Morgan Park coach Chris James tweeted in part, “We’ll be better, because we’re family & we all want to make a difference.”

Corey Harris is in great condition! He got hurt during game play.

CPS coaches, referees, administration and leadership are all working together to prevent issues like the end of today’s game from happening. We’ll be better, because we’re family & we all want to make a difference

On behalf of the entire Kenwood Academy football program I want to apologize to CPS sports administration, the entire Kenwood Community, Ms. Calloway and the Morgan Park football team for all the uncharacteristic behavior my team displayed during yesterday’s football game.

“From a coaching standpoint, you’ve got to praise them for coming out,” Trost said. “From an adult standpoint; leadership standpoint, they know this wasn’t right, and this can’t happen – and this isn’t what they want their programs to represent.”

A game that was billed as two of the best city teams going head-to-head is now stained by what happened outside the hash marks.

“This is a massive teachable moment,” Trost said. “Here’s their primo football game of the year, and unfortunately instead of talking about the great athletes, we’re talking about this moment – and that’s an unfortunate thing for all of CPS.”

The IHSA says it is working with both schools and CPS. The ejected players will be suspended for a minimum of one game — but more games can be tacked on depending on the circumstances.

CHICAGO — A Chicago man faces criminal charges in the riot at the US Capitol nearly two years ago.  Federal authorities say James McNamara was identified as the suspect seen repeatedly ramming the … END_OF_DOCUMENT_TOKEN_TO_BE_REPLACED

Other provisions would loosen the definition of an EV worker and appear to be aimed at existing automakers in Illinois, especially Stellantis and Ford. They have huge conventional auto assembly plants … END_OF_DOCUMENT_TOKEN_TO_BE_REPLACED