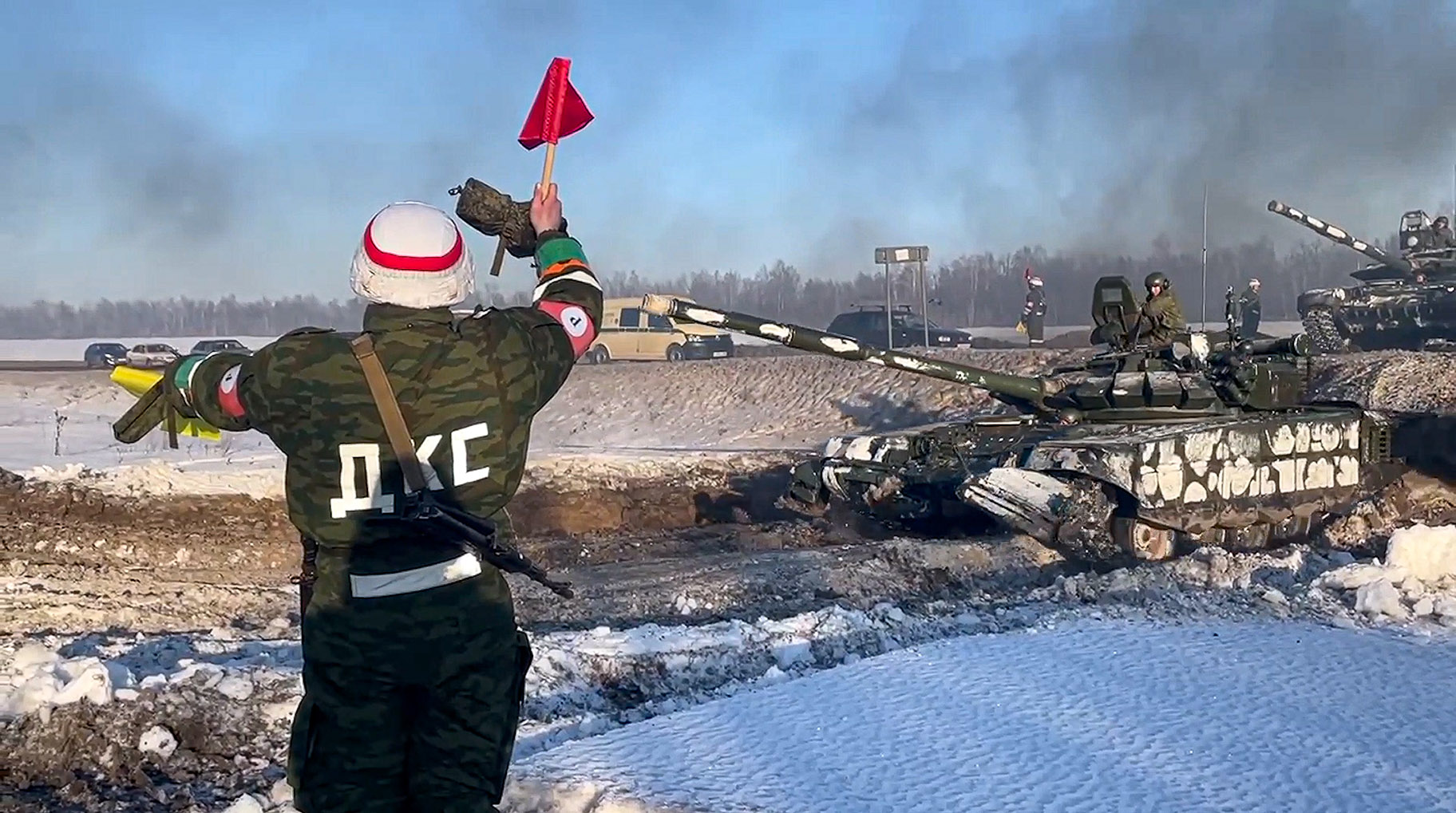 
MOSCOW (AP) — Russian President Vladimir Putin said Tuesday he welcomed a security dialogue with the West as his military reported pulling back some of its troops near Ukraine — signals that may indicate the Kremlin has opted for a diplomatic path for now despite Western fears of an imminent Russian invasion of its neighbor.

Putin said he doesn’t want war and would rely on negotiations as he presses his demand for the West to halt Ukraine’s bid to join NATO. At the same time, he didn’t commit to a full pullback of troops, saying Russia’s next moves in the standoff will depend on how the situation evolves.

While the overtures soothed global markets that have been on edge amid the worst East-West tensions in decades, Washington and its European allies remained cautious, saying they want to see evidence of a Russian pullback.

The U.S. and NATO have warned that over 130,000 Russian forces massed near Ukraine could invade at any time, and they sent troops and military supplies to shore up NATO members in Eastern Europe. Russia has denied having such plans, demanding that the West keep Ukraine and other ex-Soviet nations out of the alliance, halt weapons deployments near Russian borders, and roll back forces from Eastern Europe.

The U.S. and its allies have roundly rejected the demands, but offered Russia to engage in talks on ways to bolster security in Europe.

Speaking after meeting with German Chancellor Olaf Scholz, Putin said the West agreed to discuss a ban on missile deployment to Europe, restrictions on military drills and other confidence-building measures — issues that Moscow had put on the table years ago.

He said Russia is open to discuss “some of those elements,” but added that it would only do that “in complex with the main issues that are of primary importance for us.”

Asked if there could be a war in Europe, Putin said Russia doesn’t want it but said Ukraine’s bid to join NATO posed a major security threat to his country.

While Scholz reiterated that NATO’s eastward expansion “is not on the agenda — everyone knows that very well,” Putin retorted that Moscow will not be assuaged by such assurances.

“They are telling us it won’t happen tomorrow,” Putin said. “Well, when will it happen? The day after tomorrow? What does it change for us in the historic perspective? Nothing.”

He went on to argue NATO expansion violates the principle of the indivisibility of security enshrined in international documents.

“We want to solve this issue now as part of negotiation process through peaceful means,” Putin said. “We very much hope that our partners hear our concerns and take them seriously.”

Scholz also said diplomatic options are “far from exhausted,” and praised the announcement of a troop withdrawal as a “good signal,” adding: “We hope that more will follow.”

The Russian Defense Ministry released images of tanks and howitzers rolling onto railway platforms and more tanks rolling across snowy fields. It did not disclose where or when the images were taken, or where the vehicles were headed, other than “to places of permanent deployment.”

Russian forces continue to threaten Ukraine along the eastern border and from the Black Sea Crimean peninsula that Moscow seized from Ukraine in 2014, the year when it also backed a separatist insurgency in the country’s east. More Russian troops loom over Ukraine in Belarus, where they were deployed for sweeping joint drills.

A U.S. defense official, who spoke on condition of anonymity to discuss internal deliberations, said Pentagon analysts are reviewing the Russian withdrawal claims.

Ukraine expressed skepticism about Russia’s statements on the pullback.

NATO Secretary-General Jens Stoltenberg said that “so far, we have not seen … any signs of reduced Russian military presence on the borders of Ukraine,” adding that the alliance wants to see a “significant and enduring withdrawal of forces, troops, and not least the heavy equipment.”

Few Russians expect a war, following the Kremlin’s dismissal of Western warnings as “hysteria” and “absurdity.”

In a village in Russia’s Belgorod region about 30 kilometers (18 miles) from Ukraine’s border, residents carried on with life as usual, even as more military personnel have been passing through village streets.

“We are friends with Ukraine,” said villager Lyudmila Nechvolod. “We are really on the border, we really have relatives here and there, everyone has somebody there (on the Ukrainian side). No one wants war.”

Western officials who briefed The Associated Press said they saw no signs of de-escalation but rather the opposite, with Russia continuing to build up combat forces and other capabilities, including field hospitals. They said there are “some signs of a diplomatic opening” and they believe Putin still has not made a final decision to invade but has all the capabilities in place.

A U.S. defense official said small numbers of Russian ground units have been moving out of larger assembly areas for days, taking up positions closer to the Ukrainian border at what would be departure points if Putin launched an invasion. The official spoke on condition of anonymity to discuss information not publicly released.

U.S. Secretary of State Antony Blinken held a call with Lavrov, according to a State Department official who spoke on condition of anonymity because the call had not been publicly announced.

President Joe Biden, who telephoned French President Emmanuel Macron on Tuesday, is expected to give brief remarks later in the day on efforts to de-escalate Ukraine-Russian tensions, according to the White House.

The U.S. “remains open to high-level diplomacy in close coordination with our allies,” according to an administration statement. “The United States continues to believe diplomacy and de-escalation are the best path forward, but is prepared for every scenario.”

European leaders have scrambled to head off a new war on the continent after several tense weeks that have left Europeans feeling caught between Moscow and Washington, and further pushed up household energy prices because of a dependence on Russian gas.

Scholz’s Kremlin meeting came a day after sitting down with Ukraine’s leader in Kyiv. In his opening remarks in Moscow, Scholz addressed the Ukraine tensions but also noted Germany’s economic ties with Russia, which complicate Western efforts on how to punish Russia over an invasion.

Putin said the motion reflects the Russian public’s sympathy for the suffering of people trapped in the conflict in eastern Ukraine that has killed over 14,000 since 2014. He noted, however, that Russia continues to believe a 2015 peace deal brokered by France and Germany should serve as the main vehicle for a settlement of the separatist conflict.

Putin’s statement signaled that he wasn’t inclined to back the parliament motion that would effectively invalidate the 2015 agreement, which marked a major diplomatic coup for Moscow, requesting Kyiv to offer a broad self-rule to the separatist territories. It has been resented by many in Ukraine and its implementation has stalled.

Gov. J.B. Pritzker on Wednesday signed into law legislation that bans so-called "ghost guns" across Illinois, making it the first Midwest state to do so. House Bill 4383 aims to crack down on "ghost … END_OF_DOCUMENT_TOKEN_TO_BE_REPLACED