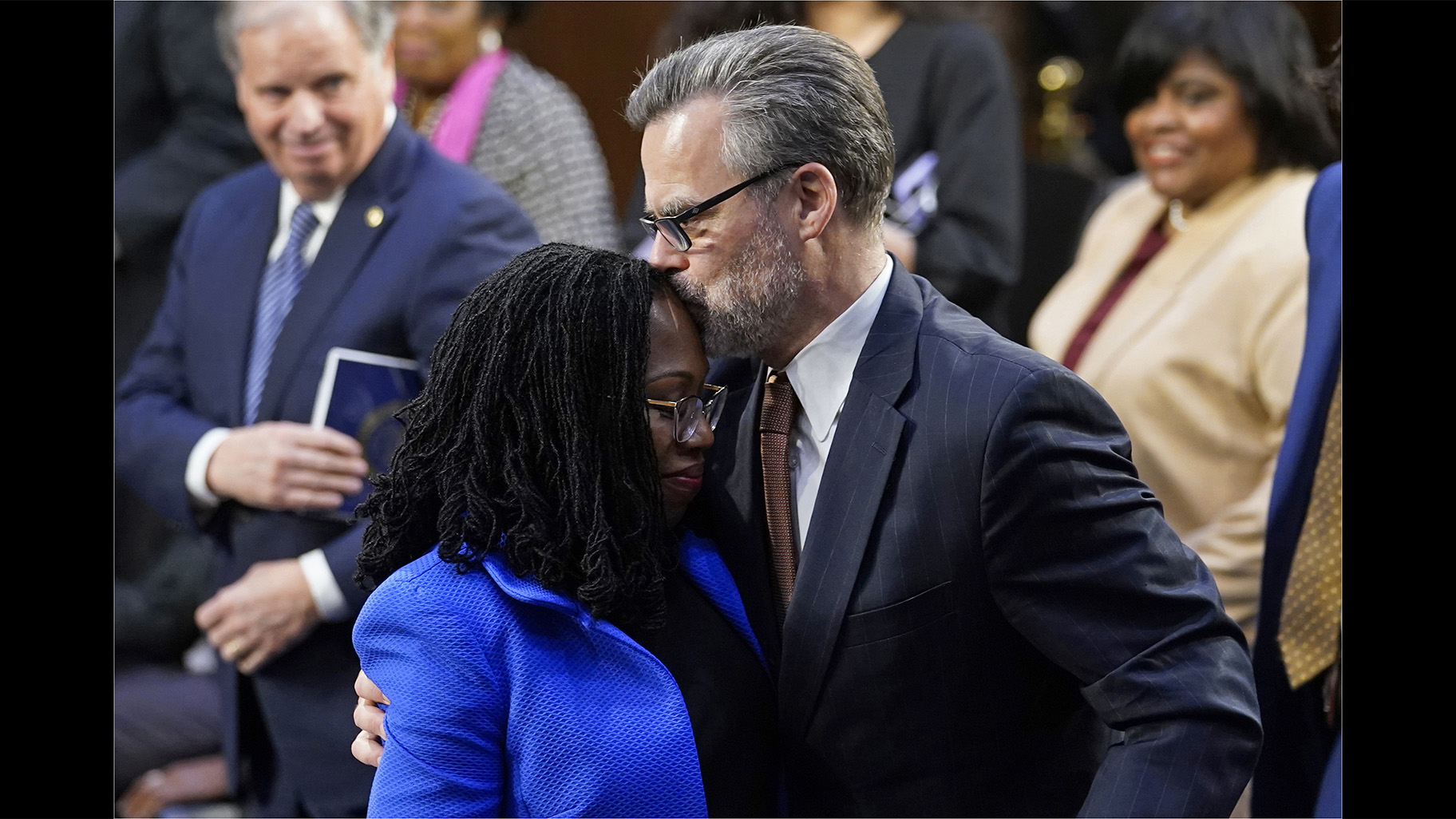 Supreme Court nominee Judge Ketanji Brown Jackson gets a kiss from her husband Dr. Patrick Jackson, at the conclusion of her confirmation hearing before the Senate Judiciary Committee on Capitol Hill in Washington, Wednesday, March 23, 2022. (AP Photo / Susan Walsh)


WASHINGTON (AP) — The historic Senate hearings for Judge Ketanji Brown Jackson, the first Black woman nominated for the Supreme Court, have been joyful, combative and clarifying, putting on display the breadth of the nation’s partisan divide and the unresolved problems of its past.

The fourth and final day of the Senate Judiciary Committee’s consideration of Jackson wrapped up Thursday with several hours of testimony from outside experts.

The American Bar Association’s standing committee on the federal judiciary has afforded its highest rating, “well qualified,” to the Harvard-educated Jackson. A junior high school friend gushed over the “supernova” debate team champion. Skeptics, including Alabama’s attorney general, warned that her views on crime and policing are “outside the mainstream.”

Yet in the 50-50 Senate, where a Trump-era rules change means it is no longer necessary to muster broad support to confirm Supreme Court nominees, the hearings have become less about the vote ahead and more about framing the politics of the eventual outcome.

Democrats are on track to confirm President Joe Biden’s pick, with a vote expected by time senators leave for a scheduled spring recess April 8.

Some takeaways from Day Four of the weeklong hearing:

The ABA committee gave Jackson the same highest rating that has been bestowed on most recent Supreme Court nominees, with the exception of Justice Amy Coney Barrett.

The committee’s chair, Ann Claire Williams, testified on the review of some 250-legal professionals on Jackson’s record. Asked how Jackson’s integrity was viewed, Williams said: “Those are the comments.”

Republican senators are focusing on a narrow slice of the judge’s work, the child pornography cases that Jackson herself has said are among “the most difficult” of her career — some of which still give her nightmares.

Much the way senators opposed to the first Black nominee to the court, Thurgood Marshall, a half-century ago portrayed the storied civil rights lawyer as soft on crime in his work defending Black people, Republicans have spotlighted Jackson’s sentencings in criminal cases, they show too much “empathy” for defendants.

A witness for the Republican side, Attorney General Steven T. Marshall of Alabama, said he believes Jackson shows more deference to criminals appearing in her courtroom than she does victims. He said her views of law enforcement reforms are “outside the mainstream.”

Republicans are trying to link Jackson to the left-leaning “defund the police” movements, but it’s unclear if the approach is working. The judge has backing from the nation’s largest law enforcement organization, the Fraternal Order of Police, and she has spoken emotionally about her brother and uncle who worked as police officers.

Donald Trump is gone from the White House, but his influence over Republicans endures.

One witness called by Republicans was Alessandra Serano, the chief legal officer of Operation Underground Railroad, a Utah based anti-trafficking nonprofit group. It is under criminal investigation in the state for exaggerating its role in law enforcement arrests involving child predators, in order to fundraise.

The organization has become popular online and found success raising money off of conspiracy theories that have are popular among suburban mothers and groups that arose out of the QAnon conspiracy theory, which casts Trump as a hero fighting a cabal of Satan-worshipping cannibals operating a child sex trafficking ring.

As Republicans focus on Jackson’s rulings in the child pornography cases, they are tapping into this strain of the GOP and its popularity among backers of the former president, drumming up voter interest before the November elections that will determine control of Congress.

From retirement in Florida, Trump has insisted, falsely, that he won the 2020 election, a belief shared by many Republicans, despite dozens of court cases and independent reviews that have rejected GOP claims of a rigged election. Trump is considering another run for president in 2024.

At one point Thursday, Sen. Sheldon Whitehouse, D-R.I., tried to air some of these points. He asked Alabama’s Marshall whether Biden was the “duly elected president” of the United States.

Marshall replied that Biden was the president.

Pressed if the witness was purposefully omitting the words “duly elected,” Marshall simply reiterated: “I’m answering the question. He is the president of the United States.”

Alabama, with Marshall, was among other states joining in a lawsuit challenging the results of the 2020 election.

THE NEXT CIVIL RIGHTS ERA

The Senate hearings have been filled each day with some of the leading civil rights leaders celebrating, as Sen. Cory Booker, D-N.J., put it, the “joy” of reaching this milestone in American history.

Testifying Thursday, the chairwoman of the Congressional Black Caucus, Rep. Joyce Beatty, said Booker “spoke not only to Black America, but to America.”

Beatty, D-Ohio, put Jackson’s moment alongside those of civil rights icon Rosa Parks and other Americans and urged senators to consider what the judge’s confirmation to the high court would mean for the country.

“We are no longer looking at 50-65 years ago,” she said, of the past era of civil rights battles, “but yet we’re still fighting.”

Senators no longer need bipartisan cooperation to confirm judicial nominees, after rules changes that allow a simple 51-vote majority for the lifetime appointment to the court.

With Jackson’s nomination almost assured by Democrats, who hold a slim majority in the 50-50 chamber with Vice President Kamala Harris able to break a tie, Republicans unable to stop the judge’s confirmation at least want sow doubt in the outcome.

Republican Sens. Josh Hawley of Missouri, Ted Cruz of Texas and Marsha Blackburn of Tennessee have led the charge, quizzing the federal judge about her views on issues of race and crime, amplifying election-year grievances and a backlash over changing culture.

Jackson is the first federal public defender to be nominated to the Supreme Court and her efforts representing those accused of crimes, alongside her work as a federal judge, have provided a lengthy record of difficult cases for senators to review.

Jackson has presented herself a judge who relies on method, not judicial philosophy, to remain neutral as she works to “stay in my lane.”

If confirmed, Jackson would also become the sixth female justice in the court’s history and the fourth among the nine members of the current court.

CHICAGO — Former Ukrainian troops are visiting Chicago to pay tribute to their brothers-in-arms this Memorial Day Weekend. Ukrainian veterans who fought in places like the Donbas region and the … END_OF_DOCUMENT_TOKEN_TO_BE_REPLACED

Hart was promoted to president from general counsel in 2020, but the CARES Act compensation limits were based on 2019 pay. His total compensation last year was estimated at $3.5 million, mostly … END_OF_DOCUMENT_TOKEN_TO_BE_REPLACED

After an often-contentious floor debate, the Chicago City Council has passed a new weekend curfew for the city’s residents, moving it back from 11 p.m. to 10 p.m. on weekends. The new ordinance will … END_OF_DOCUMENT_TOKEN_TO_BE_REPLACED