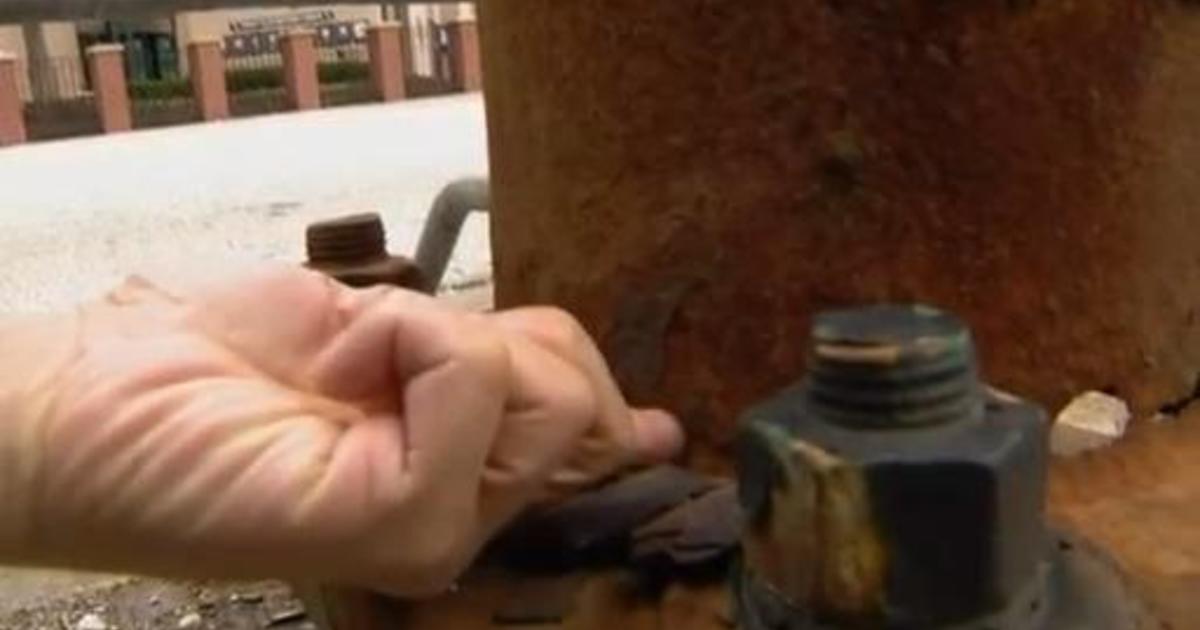 Days until the home opener at White Sox stadium – a potential danger. Outside an entrance, there are rusted out light poles where thousands of fans walk by.

One is in danger of falling right now. CBS 2’s Steven Graves spoke to an expert. A worker at CBS 2 walks by these poles often. He noticed something was off and he was right.

And the expert said the city needs to take action now. With a slight wind on Monday and a little bit of sway of the light pole.

Doctor Gongkang Fu is walking away from the pole, worried.

“It’s moving,” Fu said, adding that it needs to be replaced.

Before the long time engineer and professor at the Illinois Institute of Technology came to that conclusion, CBS 2 had him inspect the pole on 35th right outside Guaranteed Rate field.

It’s where next Tuesday, the home opener for the White Sox, where thousands of people should not be driving or walking by it. A rusted base with holes that he can stick his finger through.

The Chicago Department of Transportation (CDOT) said it inspected the poles last week. The White Sox said it is working with CDOT to ensure safety.

“This is very dangerous from a structural engineering point of view. It can come down any minute,” Fu said.

A rusted base with holes that he can stick his finger through. Out of the more than two dozen light poles on this block, a city audit found four with major damage or rust. That was back in 2018. It’s unclear if any were replaced.

There’s steel Fu found not visible from outside the poles. Corrosion, he said, was eating away at the inside. Rust possibly from snow and salt accumulation.

“Somebody needs to inspect it from inside to see what’s left,” Fu said. “Because they are in the same situation as this one in terms of snow exposure and salt.”

Meaning there’s a chance more could end up like this in the future. For years, the CBS 2 Investigators have highlighted real dangers of falling poles. One with a rusted base fell on a woman’s car late last month.

After CBS 2 flagged the Chicago Department of Transportation about the bad pole outside Guaranteed Rate Field, a spokesperson said it will be replaced by Opening Day.

As for the others, they said a paint job should suffice for now. The city said the last inspection of the pole was last week.

Steven Graves is a Multimedia Reporter for CBS2 Chicago who joined the team in September 2019.

CHICAGO — Former Ukrainian troops are visiting Chicago to pay tribute to their brothers-in-arms this Memorial Day Weekend. Ukrainian veterans who fought in places like the Donbas region and the … END_OF_DOCUMENT_TOKEN_TO_BE_REPLACED

Hart was promoted to president from general counsel in 2020, but the CARES Act compensation limits were based on 2019 pay. His total compensation last year was estimated at $3.5 million, mostly … END_OF_DOCUMENT_TOKEN_TO_BE_REPLACED

After an often-contentious floor debate, the Chicago City Council has passed a new weekend curfew for the city’s residents, moving it back from 11 p.m. to 10 p.m. on weekends. The new ordinance will … END_OF_DOCUMENT_TOKEN_TO_BE_REPLACED