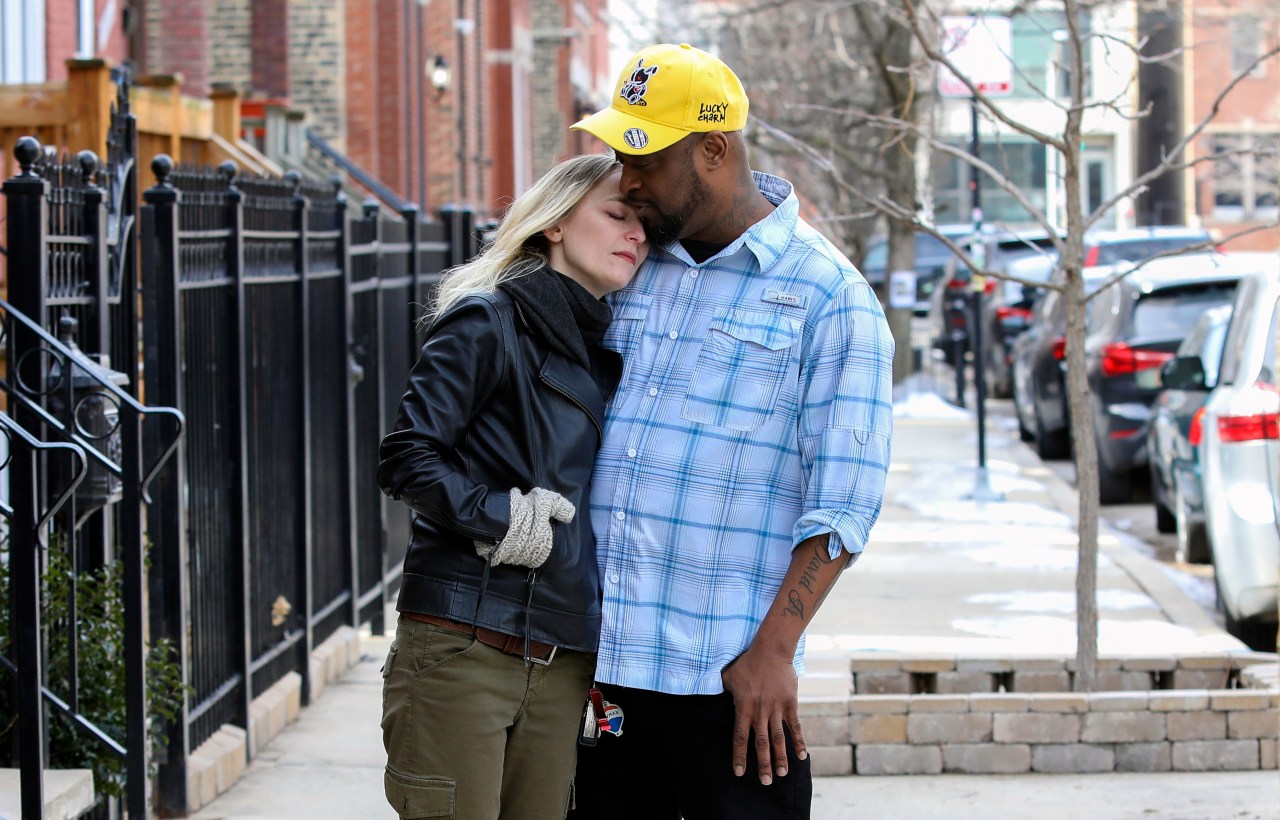 CHICAGO (AP) — When Russia invaded her home country of Ukraine, Maria decided she had to get there and help defend it — even if it meant leaving her fiancé behind in Chicago days after getting married.

Maria and her fiancé, David, married Saturday with little fanfare in the backyard of an Oak Park home — the venue offered last minute after Maria asked for advice in a neighborhood Facebook group.

On Monday, she plans to fly to Poland, then make her way to the Ukrainian border, ultimately aiming to volunteer to fight for her home country.

Maria, who asked that her last name not be published because she fears for her family’s safety in Ukraine and the U.S., said she lived with her parents in Kyiv until 1991 when the family moved to Poland.

She met her ex-husband while studying music in Austria and more than 20 years ago they moved to his hometown of Chicago — which has the second-largest Ukrainian-born population among U.S. cities.

Since the war began, she used messages and calls through Facebook to keep in touch with her parents, who have been sheltering in a parking garage during attacks on Ukraine’s largest port city of Odesa. But she said she has been unable to reach cousins in Kyiv in recent days.

Three days into the invasion, Maria made up her mind to return to Ukraine, determined to find some way to be useful. She said she doesn’t have medical or military training but worries that a Russian takeover of Ukraine will embolden the country to threaten more places around the world.

Her fiancé refused to stay behind despite Maria’s resistance to him accompanying her. But since David first needs to apply for a passport, she plans to leave Monday and wait in Poland before crossing the border.

“He knows how stubborn I am and knew he’d have no chance to convince me otherwise,” Maria said.

David, 42, said he feels a responsibility to do what he can to keep her safe.

“Because complacency and compliance are pretty much the same thing,” he said. “And you can only turn a blind eye to people being bullied for so long. And if it happens to them, it might be you next.”

He also asked that his last name not be published to avoid endangering Maria’s family.

Ukraine’s forces are outnumbered and outgunned, but their resistance did prevent a swift Russian victory. Ukrainian leaders called on citizens to join in guerrilla war this week as Russian forces gained ground on the coast and took over one major port city.

Associated Press reporters at the border checkpoint in Medyka in southeastern Poland found Ukrainians lining up to return from other countries in Europe in recent days in response to President Volodymyr Zelenskyy’s call for volunteers to come assist the country’s military.

The White House has since urged Americans not to travel to Ukraine, but Maria and David said that didn’t change their plans.

The couple met last year, got engaged in October and already planned to be married at a courthouse on March 5, a nod to Maria’s grandmother’s birthday.

After deciding they would try to reach Ukraine, they accepted the offer to hold a backyard celebration. They also asked people to purchase items needed by Ukrainian troops through an Amazon list that includes rain ponchos, medical supplies and boots rather than wedding gifts.

Maria said she’s not certain what she will have to do after arriving at the Polish border with Ukraine; friends who live near border crossings have told her it’s taking days to get through. Her parents also questioned her decision to volunteer, she said, because they don’t want to be worried about her safety on top of their own.

“If the army doesn’t take us, we’ll be as close as possible,” Maria said Wednesday. “There’s always a need for volunteers. I’m pretty strong, I’m not afraid of blood, I’m good under pressure.”

Natalia Blauvelt, a Chicago immigration attorney who has assisted dozens of clients trying to help family leave Ukraine and Russia in recent weeks, said she hasn’t heard of others seeking to get into Ukraine in order to join the country’s defense.

But she advised that anyone considering it contact the Ukrainian embassy in the U.S. and speak with an immigration attorney to talk through plans for returning to the U.S.

SENECA, Ill. — 15 people were injured in a boat fire in Seneca on Saturday afternoon, with one person suffering serious injuries, police said. According to Illinois State Police, troopers responded … END_OF_DOCUMENT_TOKEN_TO_BE_REPLACED

Vallas was CEO of Chicago Public Schools from 1995 to 2001 and served as city budget director under former Mayor Richard M. Daley. More recently, he worked as an unpaid consultant to the Fraternal … END_OF_DOCUMENT_TOKEN_TO_BE_REPLACED

As we continue our look at the candidates running for office this summer, we’re turning our eye toward Illinois’ 2nd Congressional District, where incumbent Rep. Robin Kelly is hoping to be elected to … END_OF_DOCUMENT_TOKEN_TO_BE_REPLACED